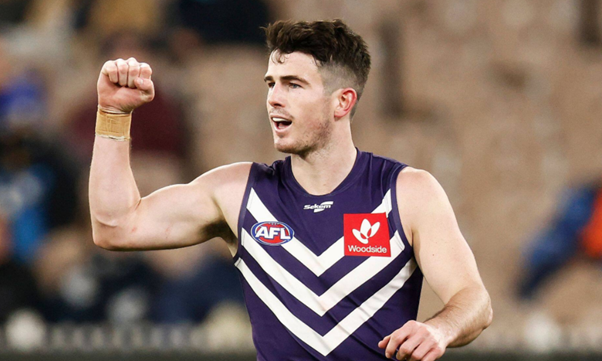 Round 8 of the AFL Premiership Season for 2022 gets underway this Friday night with a 2-game slate. We kick the evening off at 7:30pm AEST in Adelaide where Port Adelaide will attempt to get the season back on track against the Western Bulldogs, and at 8:40pm AEST Fremantle will host the Kangaroos. Draftstars have delivered with a monster $90K main and various qualifiers to the $500k AFL Live Final Qualifier contests on what should be a very fun night of daily fantasy. Check out our article here with all the info regarding the AFL Live Event.

You can watch a replay of the Draftstars AFL Show with Smatho and Roody as they breakdown this Draftstars contest on Friday night. Not to be missed if you are making lineups for these contests!

There is a slight change of rain on Friday in Adleaide, however come night time when the game kicks off conditions should be perfect. Perth looks to be a beautiful day and therefore a perfect night for football. That means we can pick our teams with concern for the weather. Let’s play!

With the Kangaroos sitting second last on the ladder with just the one win over the Eagles, who are the team sitting last, it is no surprise at all that they are giving up fantasy points through the midfield. They have conceded the third most points in the league to the position this year and the highest amount of any team in the last five games.

Given the above, it is no shock to see the Kangaroos also giving up the second most points in the league to forwards so far this season. They have given up over 11.5 points per player above league average and with Fremantle almost 40-point favourites in this matchup it should be a total fill up for Dockers forward stacks.

Todd Goldstein ($8,670) returned to the role of number one ruck last week with Xerri out. This resulted in the highest attendance of centre bounces at 68% and playing the role around the ground. This was a bonanza for his fantasy scoring posting 90 points. For this role Goldstein is still far too cheap with his price point not raising above the $8k range, expect him to be the highest owned player on the slate. 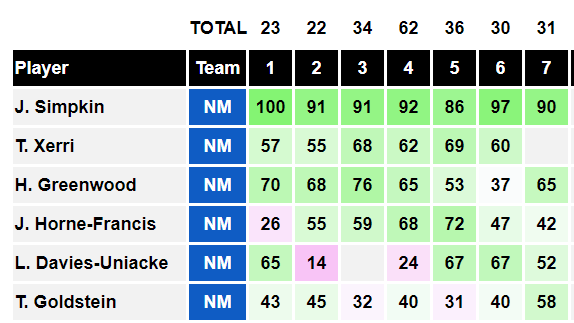 Nathan O’Driscoll ($8,670) has played himself into a wing role this season, particularly with Blake Acres out this week. Has already shown GPP winning upside at this price point posting a 109 fantasy point game in just his second full match and has consistently been over 60 points all year. This is an elite matchup for him in a game that Fremantle should win comfortably.

Caleb Serong ($13,200)… as noted above I will be stacking up the Dockers midfield and the Dockers forward line. Serong has had a disappointing start to the season fantasy wise, but as we saw to end last year, he has a 120+ point ceiling, and if there is ever a game that it is in play it is this matchup at home against the Kangaroos.

Connor Rozee ($10,930) will be one of the rare non-Dockers players I roster through the midfield (see CBA % below). Over the last two weeks he has been injected into the Power midfield and that has resulted in huge boost to his fantasy scoring. In two of those games he went for 113+ fantasy points. 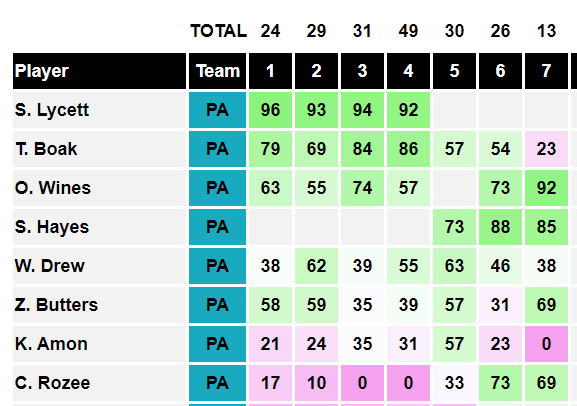 Lachie Shultz ($11,760) will be my low owned play on this slate. His price point is awkward; however he is having a breakout year in this surprising Dockers season. Posting a 99 and 120 in his last four games, he has shown GPP winning upside, even at this price. As noted above this is the second-best matchup in the league for forwards.

Andrew Brayshaw ($17,590)… nothing but a hard tag will be able to stop this man from a 120+ point game on Friday. The leader of the Dockers midfield he has already posted a 181-point game this season and has been at 110+ in 5 of the 7 games. His price tag is up there but there is actually plenty of strong value plays on this slate to afford to lock him in. 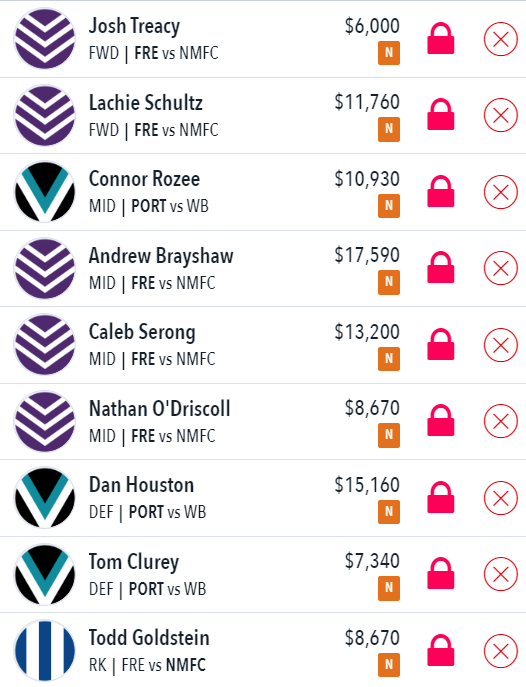