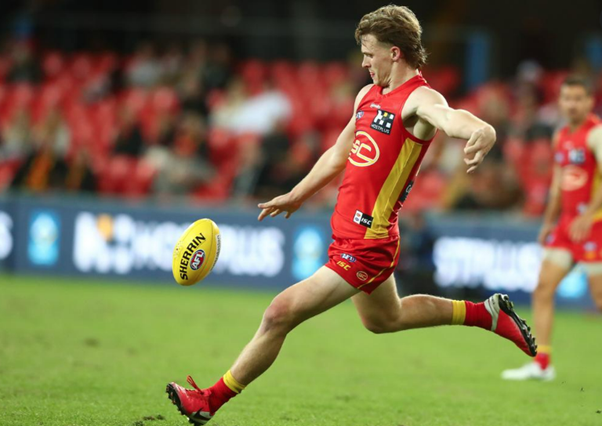 Round 20 of the AFL Premiership Season for 2022 will close out with a fun three game Sunday slate. The highlight of this slate is the 8th placed Richmond Tigers hosting the 3rd place Brisbane Lions at the MCG. Both sides are fighting for their position in the finals and this game will be critical. As always, Draftstars has all the daily fantasy lovers covered with a $60k main and a wide variety of other contests, including qualifiers to the massive $500k live final later in the year:

A sprinkle of rain in both locations that games are being held on Sunday, however it will be very unlikey to be enough to have any signficiant impact on the games. The MCG drainage is far too good, while in the Gold Coast it should be passed by game time. Finally we all know that Marvel Stadium lets no rain in with the roof on! Let’s play some fantasy!

Breaking things down further, North Melbourne are particularly getting killed by inside midfields this season, while the Eagles have been getting opened up on the outside by wingers. Up forward both sides have been getting destroyed by key forwards.

Jeremy Sharp ($6,000) in six full games this season Sharp has posted three scores of 84, 68 and 53, which would all be solid returns for a minimum priced player. He demonstrated last year a huge upside of 100+ as a wingman and on this slate against West Coast he faces the best matchup in the league for a midfielder, and in particularly the Eagles have given up the most points to wingman this season.

Elijah Hollands ($7,400) was a much heralded high draft pick of the Gold Coast Suns and finally made his debut after over 18 months of waiting. He did not disappoint, looking right at home at AFL level posting a 64 fantasy point game and kicking two goals. This debut was against one of the toughest teams in the league in the Brisbane Lions, but in this matchup, he draws one of the easiest against the Eagles. West Coast have given up 9 points per player above league average to forwards this season and the Suns are 31 point favourites, which means Hollands should have plenty more opportunity this week. I expect to see a greater than 10x return at this price point.

Sam Draper ($9,610) looks to have really found his form in the ruck in recent weeks, right in time for the Bombers late season surge. In the last two weeks, he has posted 79 and 88 fantasy points, while out duelling the Darcy Cameron/Mason Cox duo and Jarrod Witts. This week he will gain the added boost of being the sole true ruck in the game as Essendon have dropped Andrew Phillips and look set to hand the keys over to Draper full time. At this price point, a boost in opportunity should see his ceiling raise up to the 100-point mark.

Peter Wright ($10,180)… as noted above, both North Melbourne and West Coast have been being beaten up by key forwards this year. Peter Wright has been in career best form with 6 straight scores of 74+, including four games of 86+. This will be one of the easiest matchups of that stretch with North Melbourne giving up 8 points per player above league average to forwards and Essendon being over 40 point favourites. Wright is also in that awkward $10k price range, which means he should be relatively low owned on this slate.

Noah Anderson ($15,730) has low key developed into one of the form midfielders in the league throughout this season. Averaging just under 100 fantasy points on the season, he is putting up 116 per game over the last four matches, including a ridiculous 141 against Richmond where he added in the game winning goal for good measure. This week will be his easiest matchup of the season against the Eagles who have given up over 7 points per player above average to midfielders this season, and are getting beaten on both the inside and the outside, which plays right into Noah’s game style. 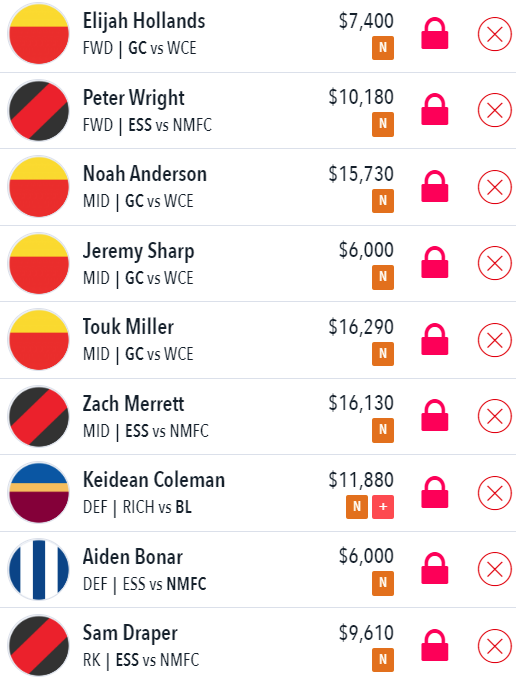