North Melbourne and GWS will face off in a low-key fixture at Marvel Stadium on Sunday, both teams desperate to start the second half of the season on a positive note.

For the Kangaroos, the next few months will be about avoiding the dreaded wooden spoon, while the Giants will be eager to show the football world that they can still compete with the better teams in the competition.

Melbourne - It’s been a miserable old week in Melbourne however Marvel will be as dry as ever with the roof closed.

With just one game on this slate, there aren’t many trends to work with.

North are a good team to target with opposition players in just about every position on the park. Forwards and midfielders have taken full toll on the Kangaroos throughout the season and I can’t see that changing here.

Ruck is the one position where it may be wise to look at North options, as GWS have been leaky. The Giants have rotated their ruck stocks in 2022 and have yet to establish a single player in the position, leaving opposition big men to get on top.

On a slate lacking value Ricciardi is just about the safest option. He has a solid floor in the mid-40s, and should the Giants win in a blowout he should get the opportunity to kick a couple of goals and hit 10x value.

In the absence of Xerri, Goldy took over the #1 ruck spot and has scored well in that role since. He has a great matchup here and a recent ton at the price of just $10k.

It’s been an up and down year so far for polarising superstar Toby Greene, however, has the chance here to build some momentum in his campaign. Greene has scored 85 and 89 points in his last two matches and should have a safe floor with some goals on Sunday.

Kelly is primed for a huge one here. The silky smooth midfielder has previous scored of 152 and 148 against the Kangaroos and has averaged 126 points in his last three matches… lock and load. 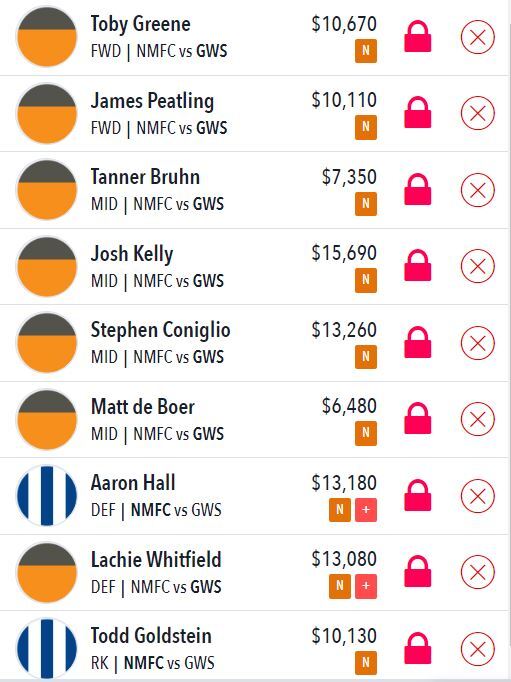