The biggest day of the regular season for the AFL season is here. In additional to the traditional ANZAC Day clash we have another 2 games on this daily fantasy slate. The major platforms have us covered with a wide array of huge contests on offer:

Another relatively clear day across Australia from a rain point of view. I am comfortable not having to consider the weather when selecting on this slate.

Finlay Macrae (DS $6,070) should be better for the run after a debut over in the west against the Eagles. Even in a difficult first up game Macrae managed to post 54 fantasy points and his price tag has barely moved. This is an easier matchup back home at the MCG so I think a 10x on his salary should be in range. I like that he was given opportunities both on the wing and on the inside (attending 33% of the centre bounces).

Archie Perkins (DS $6,970) didn’t see much action on the coal face in his first couple of games, but last week against the Lions he was thrown into the fire and attended over 50% of the centre bounces. This resulted in a season high score of 82 fantasy points. At these price points I much prefer taking the value plays with a few games under their belt than the cheaper debutants available on this slate. And the biggest key is that both Macrae and Perkins are seeing midfield time.

Charlie Dixon (DS $8,800) is as cheap as you will really see him get to after an up and down start to the season. That said through 5 games he has still posted an 80 and a 70 point performance. Port Adelaide are the biggest favourites on this slate at nearly 5 goals, and back at home they should handle St Kilda quite comfortably. Dixon has 100 point upside if he can get onto a bag and I love that upside at this price for GPP tournaments.

Tom Phillips (DS $11,190) is one out the box here, but I do like Hawks players on this slate. Playing down in the friendly confines of Tasmania (where they haven’t played in over a season) is typically fantasy gold for the Hawks. I expect them to link up heavily across the back line as has been their style for an eternity under Clarko, and Phillips should take advantage of this leaking back for the switch. He has yet to show that upside score this season, however you should pick him up at single figure ownership so if he hits you will capitalise.

Zach Merrett (DS $16,250) suits what I described in the game where to attack section above. He is a premium midfielder for the Essendon with the absolute best matchup in the league by far for that position. Merrett fills up on uncontested marks and possessions as well, which is the Achilles heel of this year’s Collingwood team. Merrett is the highest priced player on the slate and averaging 110 points per game this season, with a high score of 121, but no scores under 100. Expect him to be highly owned.

Brody Grundy (DS $15,350) has been back to his old self again this season averaging 114 points per game with a season high of 152. He even tuned up Nic Naitanui last week to the tune of 120 fantasy points (typically he had been on the losing side of these battles in the past). On this slate he draws a much easier matchup against Andrew Phillips for the Bombers. 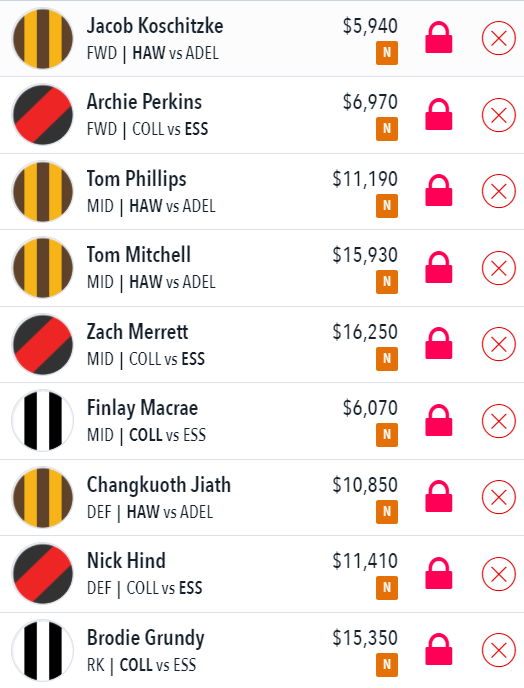