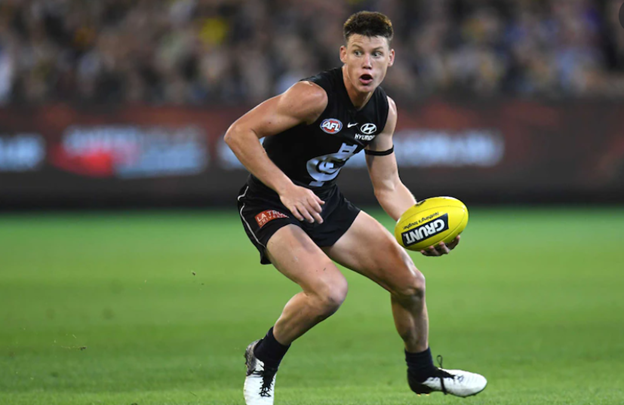 With the Saturday and Sunday slates flipped this week we get a massive four game slate to close out Round 18 of the 2021 AFL Premiership Season.  The major platform has us covered with a wide array of huge contests on offer:

Absolutely perfect conditions on the Gold Coast where two games are being played on Metricon Stadium today. In Melbourne and Adelaide there could be a sprinkle of rain throughout the day at some stage, however, nowhere near enough to start considering that in your team builds. Let’s Play!

This is a very interesting slate as we are starting to see significant shift in late season form compared to how teams have performed through the majority of the season. On this slate we have three of the top five teams for points conceded to backs to choose from, with two of those three (West Coast and Adelaide) matched up against each other. Collingwood had been the number one team to target at this position all year, however since the coaching change there has been a relative shift in game style and the Magpies have given up just 61 points per game over the last five weeks (which would be one of the lower marks in the league).

North Melbourne are another team that has recently been much more difficult to score against. One of the top teams to target through the midfield all season they have held teams to just 82 points per player over the last five weeks. When you isolate the top three scoring players, however, it is till right up there at 108 points over that same stretch, which is ideal for Essendon who have two of the highest scoring fantasy players in the league in their midfield.

The forward matchups are a delight today with Carlton and Adelaide giving up the top two most points in the league to this position this year. The Blues have been somewhat more restrictive over the past five rounds, but stacking up Collingwood and West Coast forwards looks the clear strategy on this slate.

Nick Blakey (DS $6,780) has had a positional move to the backline since returning the lineup these past two weeks and he has excelled in the role (keeping the rate of forwards improving when they swing to the backline at 100% all time). These past two weeks he has posted back to back 77+ fantasy point games and despite this improvement we are yet to see any major movement in his price.

Callum Brown (DS $7,230) was injected into the midfield last week for the Magpies attending 63% of their centre bounces (see below). This opportunity in the middle resulted in a season high fantasy score of 82 points from 24 possessions. Like Blakey, his price is yet to shift any great amount and given this role makes for an obvious value play on this slate. 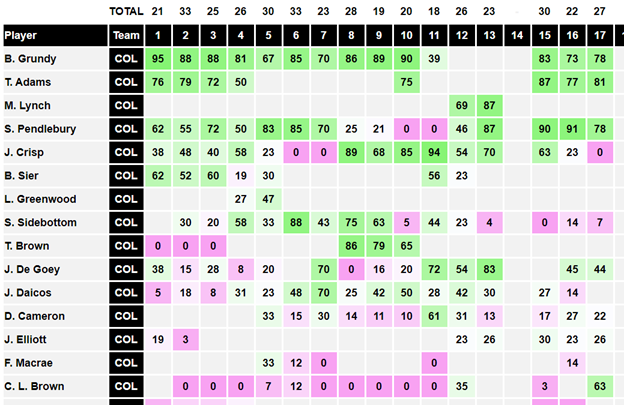 Jordan De Goey (DS $12,070) as we have mentioned each week continues to be given a solid run in the midfield and is in some of the best form of his career, both fantasy wise and on field performance. From his last five games, he has posted 4 scores of 106+ and he is attending 45-83% of the Magpies centre bounces in each of those contests. This is an elite matchup for him as noted above with the Blues giving up the most points in the league to forwards, which is where Ge Doey swings when he is not in the middle. Note however, De Goey is Mid only on Draftstars.

Sam Walsh (DS $16,140) is up to three straight games of 123+ points and has done it in 4 of his last 5. This is an elite matchup for him with the Magpies giving up the second most uncontested possessions in the league and the most uncontested marks, which should allow Walsh to absolutely cut them up on the outside. I love him at the MCG where he has posted 5 games of 104+ from his 7 matches there this season.

Brodie Grundy (DS $16,290) has an absolute dream matchup on this slate against Tom De Koning who he should physically dominate similar to how he was able to dominate Chol last week. Carlton have given up 84 points per game to the number one ruckman over the last five weeks with De Koning playing the number one role, this would be the fourth highest mark in the league for the season long averages. I expect a Grundy to back up his 139-point game last week with another similar performance. 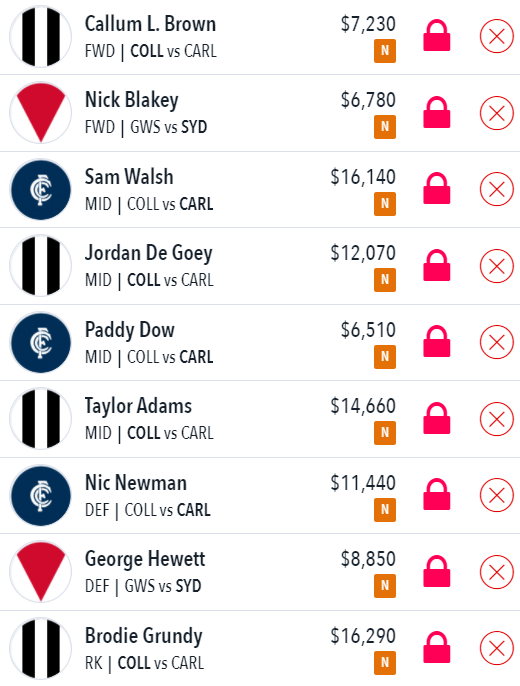