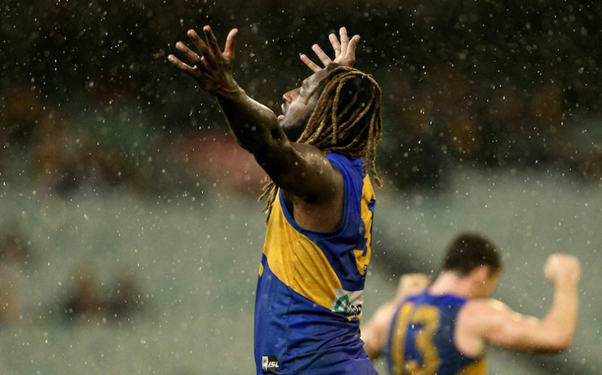 Round 17 of the 2021 AFL Premiership Season offers us a bonus Monday night game to either help save the weekend or parlay your profits! West Coast will host North Melbourne out west and as always there are massive daily fantasy contests on offer: 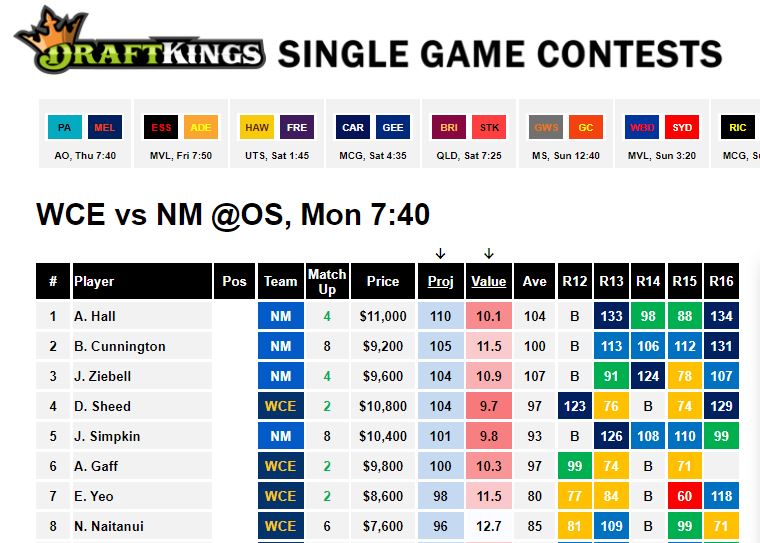 Conditions are looking extremely wet for this Monday game with up to 25 mm of rain and thunderstorm expected throughout the day. While the game isn’t until due to start until very late afternoon (in Western Australia) it still appears likely showers will be continuing through this period. I will be looking to load up on inside midfielders who are contested beasts and love a tackle on this slate.

West Coast concede the fourth most points in the league to backs this season, which is not a great shock when you realise they give up the most uncontested disposlas in the AFL and are top 3 for uncontested marks. This makes targetting North Melbourne backs a very juicy option consideirng the Kangaroos have really loaded up on disposals in this area of the ground this season. The wet weather may put a dampner on this game style, but still worth consideration.

No surprise to see North Melbourne have conceded the second most points in the league to midfielders this year given they are still sitting in dead last on the ladder. The Eagles midfielders are all well priced on this slate as well due to recent performances and a number of players slowly returning from injury. This makes for the perfect setup in this matchup at home.

Will Phillips (DS $5,000) is bargain basement value play on this slate. Phillips has been getting a glimpse of midfield time in the last two weeks (attending 41% and 29% of the Kangaroos centre bounces respectively) and he has been hit and miss posting 62 and 35 fantasy point games. The 35 points did come against the toughest midfield in the league in the Western Bulldogs. A wet contested game should help him find a fantasy score.

Jamie Cripps (DS $8,990) / Liam Ryan (DS $8,820) are two forwards I will consider given the conditions. In the wet, pressure forwards and goal sneaks are likely targets over key forwards who will be relying on contested marks. Cripps should be able to find himself in a number tackles and has shown form of being able to score in the wet weather before. While Ryan has clean skills that should put him a class above the rest. North Melbourne have given up the third most points in the league to forward this season, and the Eagles are 5 goal favourites even considering the wet conditions.

Elliot Yeo (DS $12,820) saw his game time return to the highest it has been this season (5 games since returning from injury) last week, playing 79% game time. It also correlated with a significant boost in his fantasy score posting a massive 118 points in a huge loss to the Sydney Swans. Yeo is a great contested player who racks up tackles in his sleep, I would expect double figures in this matchup given the conditions and given his price point is near a lock and load play on this slate.

Nic Naitanui (DS $12,450) is a contested monster and should be at home in the wet conditions, which will see a significant increase in stoppages (meaning more ruck contests, and more hit outs). He has averaged 101 points per game over his last 5 games at home, which included two games of 109+. In a head-to-head matchup it can be less about the gross score and more about who will win the contest as well given both Naitanui and Goldstein are very evenly priced. In that case, North Melbourne have conceded 81 points per game to the opposition’s number one ruck this year, compared to just 75 per game by the Eagles. Furthermore, Tristain Xerri is back in the line-up to support Goldstein this week and in the games Campbell has played this year Goldy has averaged just 79 points per game.

Ben Cunnington (DS $14,840) is an absolute beast in the wet conditions. This year has been one of the better seasons of his career and it has resulted in a fantasy average of 99.5, but over the last 7 games he has posted 6 tonnes (including 4 of 112+). Normally a ground the size of Optus Stadium would not be ideal for Cunnington who has never been confused with Carl Lewis, but on a wet slippery day should be one of the best on the ground. 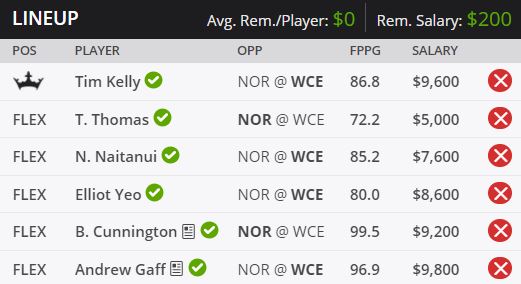 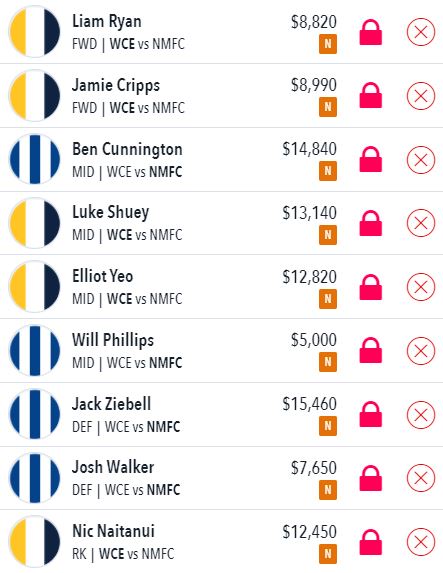