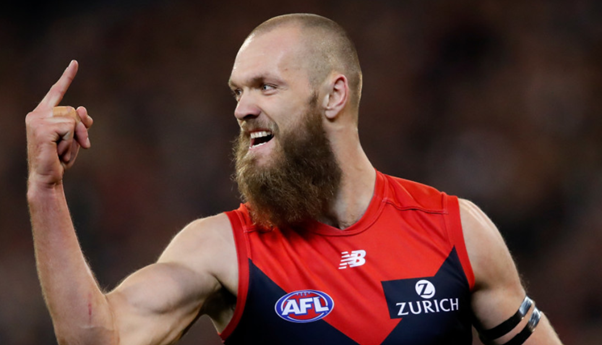 Round 11 of the 2021, AFL Premiership Season kicks off this Friday night with a game an absolute blockbuster between the league’s top two teams, the Western Bulldogs and the Melbourne Demons. As always, we have massive daily fantasy contests on offer:

Conflicting reports that the roof is going to be open at Marvel Stadium for this clash! For what it’s worth, it’s a rather cold cloudy day in Melbourne.

There is not a whole lot to uncover with the data in this matchup, as it is no surprise that the two top teams in the league this season are both bottom 5 for fantasy points conceded. One of the areas where either team gives up an above average mark is defenders against the Bulldogs, who are conceding 3 points per player above league average and 92 points per game to the top three scoring players at the position.

Ruck has been an ongoing issue for the Western Bulldogs and despite being a lot more solid this season with the addition of Stefan Martin and more recently the use of Jordan Sweet. They are still conceding 83 points per game to the oppositions number one ruck man, which is the 6th highest mark in the league. Hit outs remain the major concern giving up the second most in the league.

Riley Garcia (DS $5,000 DK $3,000) comes in on debut to help cover the loss of Adam Treloar. Injuries have prevented him from making his debut in his first two seasons on an AFL list, however playing as an inside midfielder he had solid numbers in under age (20 touches per game) and has continued this in the VFL posting 25 and 28 touches from his last two games. Obviously, we can’t expect Garcia to play a high amount through the midfield but Treloar had been attend over 50% of the Bulldogs centre bounces, of which it is likely Garcia should pick up a portion.

Christian Salem (DS $13,910 DK $9,000) has had a monster season along with most of the other big names at the Demons. Averaging 96 fantasy points per game, including three tonnes from his last 5 games, it has by far been his best season to date. As noted above the one area where you can target the Bulldogs from a fantasy perspective has been with backs, which means this is a great spot for Salem. I will be looking to link Salem up with cheaper Melbourne backs.

Bailey Smith (DS $11,480 DK $7,000) is the obvious replacement for Treloar on the inside, and we already saw this starting the week before Treloar went out hurt as he attended 58% of the Bulldogs centre bounces (and Treloar’s dropped to just 32%). These numbers increased last week after Treloar was injured and I think we can readily expect Smith to be lining up in at least half of the Bulldogs centre bounces this week. 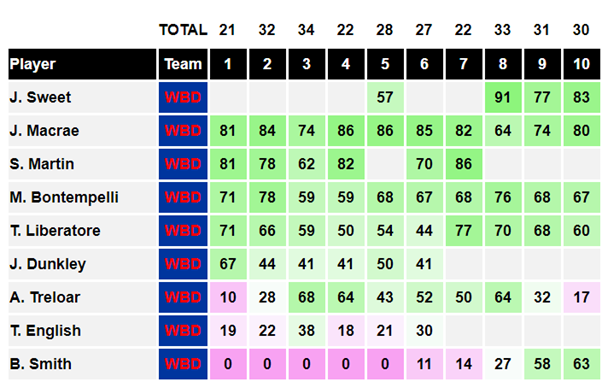 Jackson Macrae (DS $16,530 DK $11,400) is the safest player in fantasy right now. Through 10 games he is averaging a ridiculous 120 fantasy points (fresh off his second 150+ point game of the season last week). He has yet to have a single score under 100 points and as noted at the top I will be fading Melbourne midfielders to a degree in favour of the Bulldogs as they have been the hardest team to score against through the middle by far this season.

Max Gawn (DS $16,220 DK $10,600) has really just hummed along like his usual self this season despite the inclusion of Luke Jackson who is attending 20-30% of the centre bounces. Gawn has posted 100+ points in 7 of his 9 games, including 7 of his last 8. On this slate, he draws an elite matchup against Jordan Sweet and the Western Bulldogs who are giving up the second most hit outs in the league this season and have struggled in past years to hold opposition rucks fantasy scores down. 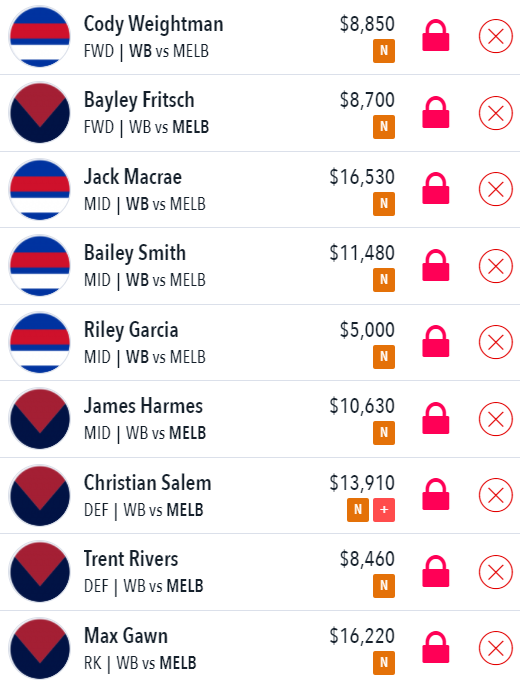 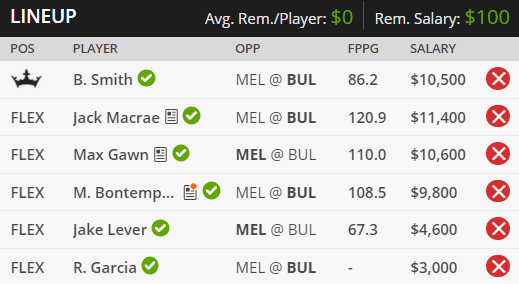