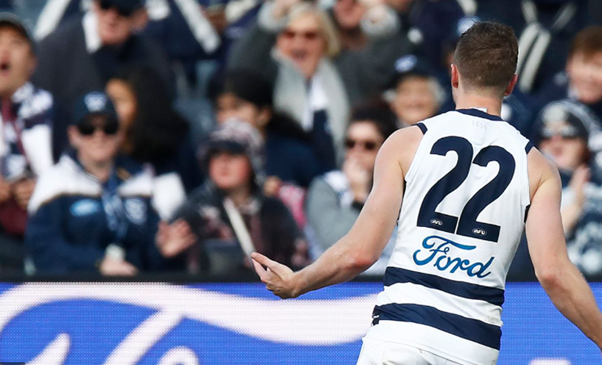 We kick off week 2 of the 2021 AFL Finals Series with the first of two massive knockout finals between Geelong and the GWS Giants. The game is being held in Perth as both teams start on the road to the grand final. This mega Friday night game has some of the biggest dialy fantasty prize pools of the season:

Only the slightest drizzle of rain forecast tomorrow and there should be absolutely no impact on the game from a fantasty perspective.

This is matchup between two of the stingiest teams in the league in conceding disposals and fantasy points (Geelong give up the fewest and the Giants give up the 7th fewest). That said, the Cats dominate the football more than any other team in the league, racking up the most disposals this season, the most uncontested possessions and the second most uncontested marks. They will look to get the game on their terms and control the ball.

The only real chink in either teams armour is the ruck position for the Giants. They have given up 89 points per game to the oppositions number one ruckman this year, which is the equal second most in the league.  These two sides met four weeks ago and Rhys Stanley notched up 100+ fantsty points in a loss, however that was against Kieren Briggs and this game it will be big Shane Mumford.

Max Holmes (DS $6,190) price point has not adjusted enough to reflect his recent performance. From his last three games he has gone over 62 points in each match, including a 74 point game against the Demons in the last round. He has been sneaking into a few centre bounces, which might not happen in this crucial game, however in big final like this where value plays are non-existent Holmes looks about as safe as plays come.

Lachie Ash (DS $7,720) continues to be a play in these single game finals matchups for me. Priced at $7k he has shifted to playing predominately across the back line again, however as we have seen earlier in the season he brings 120+ upside, which is rare for someone in this price range. Stack him up with other GWS backs and hope they get pinned into the back line and over possess the ball. Even as a solo play on this slate he is playable given he has 4 games of 65+ from his last 6 matches, which is still over 8x return at this price point.

Jeremy Cameron (DS $8,850) has dipped under that $9k mark and we all know if the Cats get on top of this game (which is expected given they are just under 3 goal favourites) he can easily kick 4-5 goals and his the 100+ fantasy point mark. I will be focused on Geelong stacks with Cameron in the forward line for salary relief.

Rhys Stanley (DS $11,430) will be my preferred play in the ruck for reasons already noted above. GWS have been one of the top matchups in the league for rucks not just this year, but going back last year as well. Shane Mumford will likely throw his body around early and win the contests, but Stanley should get on his bike around the ground and be able to rack up possessions. The other benefit is based upon the recent performances I expect Stanley to be the lower owned of the two due to recency bias.

Mitch Duncan (DS $15,630) came back from injury last week and slotted into the backline to help cover the loss of Tom Stewart. He didn’t miss a beat in this role racking up uncontested marks and disposals, while also picking off intercept marks. He posted a massive 135 fantasy points in a loss and it looked clear that the Cats wanted the ball in his hands across half back at every opportunity. This $15k price point would have been a lock and load prior to the injury and his first game back did nothing to dissuade this notion. A key link to any Geelong stacks. 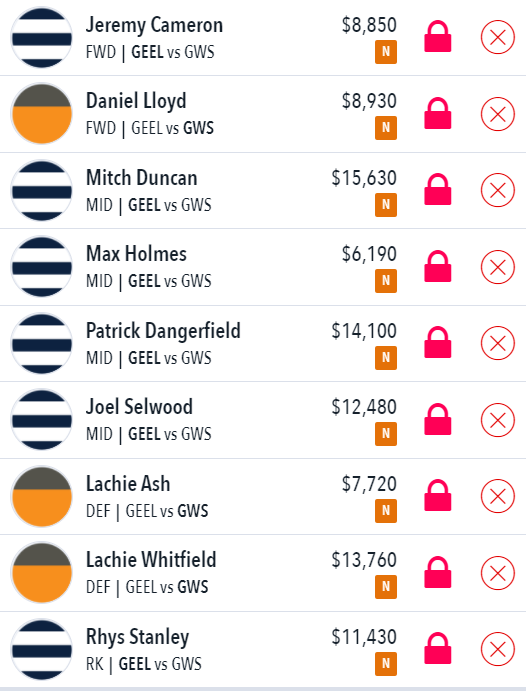