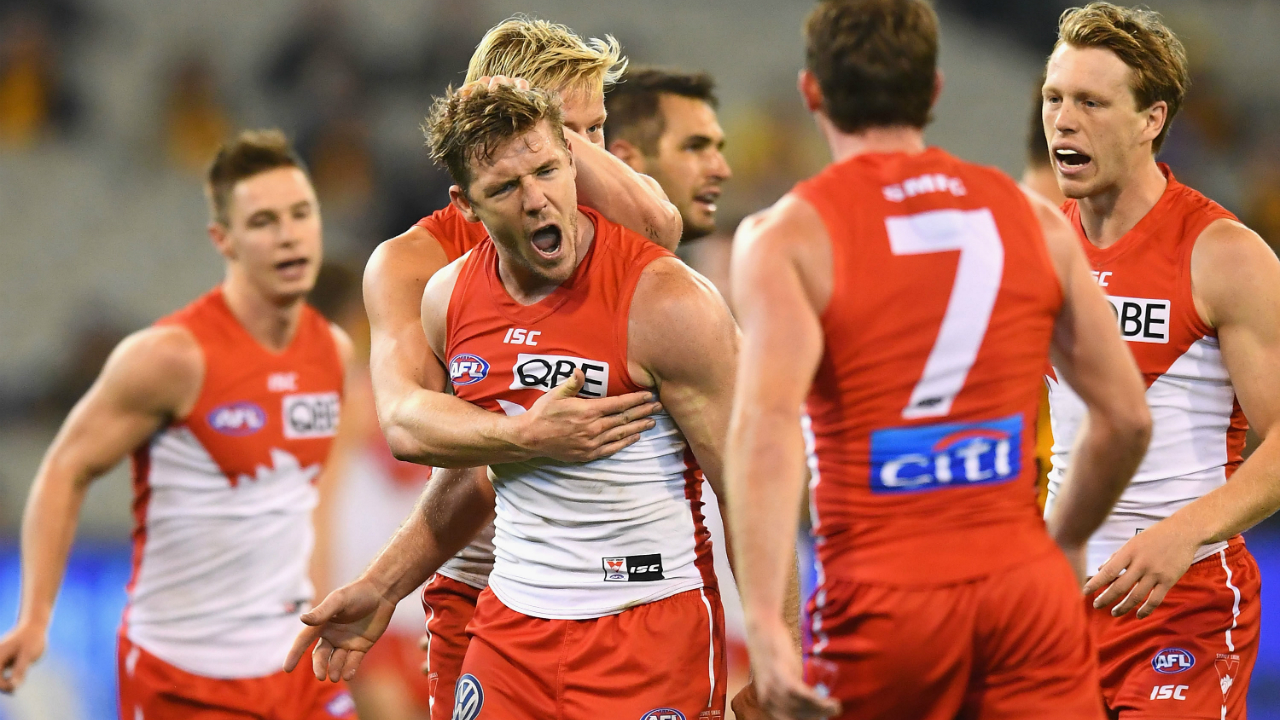 Let’s crack in for another three game special for this week's Saturday slate. Spread across Sydney, Brisbane and Adelaide we will be navigating a variety of weather as the east coast gets hit with a significant amount of rain this weekend. As always the major platforms have us covered with a huge variety of massive daily fantasy contests to choose from:

Hawthorn are on this slate and we all know what that means. Load up on their opponent’s backs. This has been a trend going back at least two years now and they continue to set up their structure allowing the cheap kicks across half back. This season they have given up +5.2 points per game to the position and this is even higher when you look at just the top 3 scoring players. 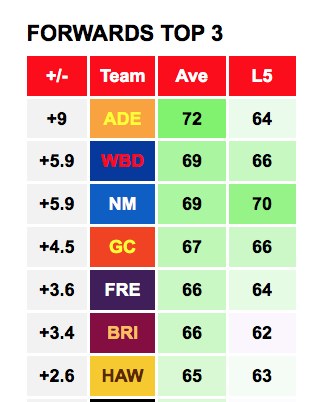 North Melbourne stand out as a team to attack with forwards on this slate. They have given up the third most points in the league to the position this season at +3.8 points above league average. Carlton are over 12-point favourites against North as well, however if the weather comes it will be hard to target key forwards.

This is an interesting slate for rucks, St Kilda are sitting around the top of the leaderboard for points conceded. That is likely a bit of fools gold, however, as they are now playing the double headed monster with Ryder and Marshall. The next best team to attack is Sydney. There is some concern over who will be rucking for the Hawks with Brooksby being brought in.

Looks to be heavy rain in Brisbane, which will need to be considered. Sydney will a bit more difficult to predict as the forecast for tomorrow keeps improving. That said it will at the least be somewhat slippery at the SCG. I will be focusing on rucks and inside players who rack up tackles in these two games.

Meanwhile Adelaide looks to be perfect conditions for football, which means it has the highest game total on the slate by over 10 points and is a game where you can play outside players with little concern.

We had him listed as a value play last week at minimum price and were rewarded with a massive 67 fantasy points, which was a great return in the shortened quarter format. Although there has been a price rise, Mayes looks to be in play at his price point with Port playing in great conditions at home against St Kilda. Who have given up the third most uncontested possessions in the league this season.

Kennedy is getting opportunities through the midfield for the Blues (10 centre bounce attendances last week), which is always a recipe for success. He is priced nicely and can be played as a forward on both platforms, which is a benefit on this slate where the position looks light on solid options. He posted 65 points in his first game this season, which shows he has a sufficient at this price point.

Bell has done nothing in his limited time at AFL level to indicate he can score fantasy points. That said he has been playing through the midfield in scratch matches for the Swans and with another midfielder going down in George Hewitt (20 center bounce attendances last week) it is only natural to assume there will be opportunities to get a burst in there, which at the absolute minimum pricing means he is certainly worth considering.

We can’t get away from playing backs against the Hawks. The weather poses an issue, particularly given most defenders rely on the mark / kicks across the back line to score. However, Mills already had a situation similar to this a few back against the Tigers (who love giving up points to defenders) in wet and slippery conditions. They resulted in a massive 125 points. I will be linking Mills with other Sydney defenders, including Lloyd and Rampe (check his scores against the Hawks and remember key backs vs Hawthorn).

If we knew McEvoy would be taking the majority of the ruck duties, he would be a total lock on this slate. Still underpriced for where he would be as the number 1 ruck, he also draws one of the top matchups in the league for the position against Callum Sinclair. To make this even juicier the wet weather will be a positive for ruckman as the stoppages increase.

Set, forget and move onto the next. Parker was our premium pick for midfielders last week and returned in spades with a massive 110 points against the Suns. With the injury battles the Swans have had through the midfield it really leaves it all up to Parker who should revel in the wet conditions as an inside tackling machine.

Lining up against is the artist formerly known as Titch. While he doesn’t quite resemble the fantasy monster of yesteryear, he has still shown he can hit the 100 point mark this year in shortened quarters. A lot of narrative here as he returns to the SCG to face his former team. Typically, in the past the Swans have used Hewett as the tag on Mitchell, but without him in the lineup that tactic may go unused. In that case I expect Mitchell to set himself for a massive game in the wet conditions. 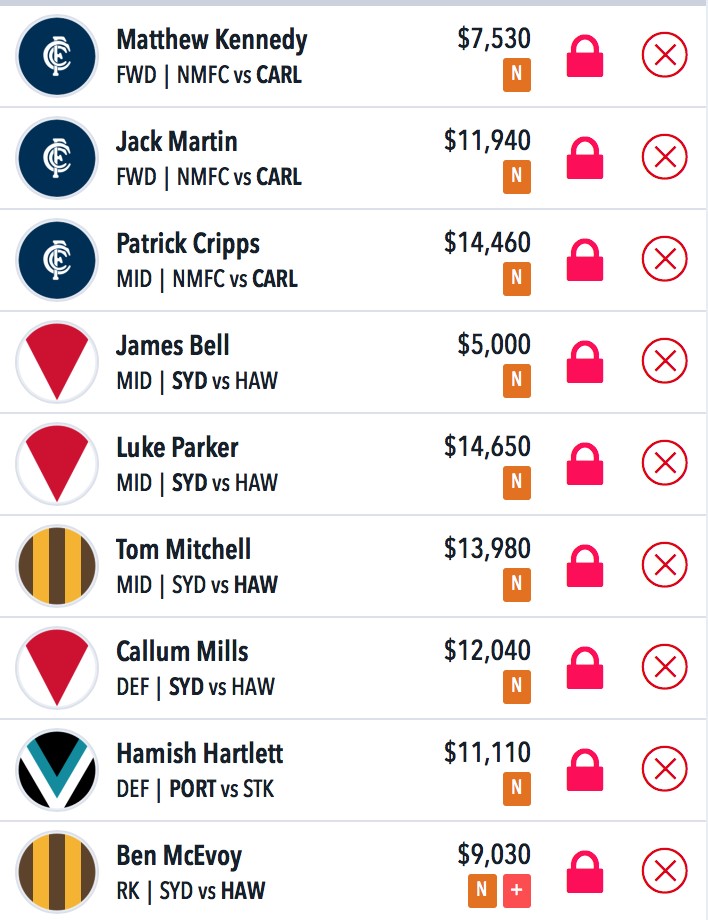 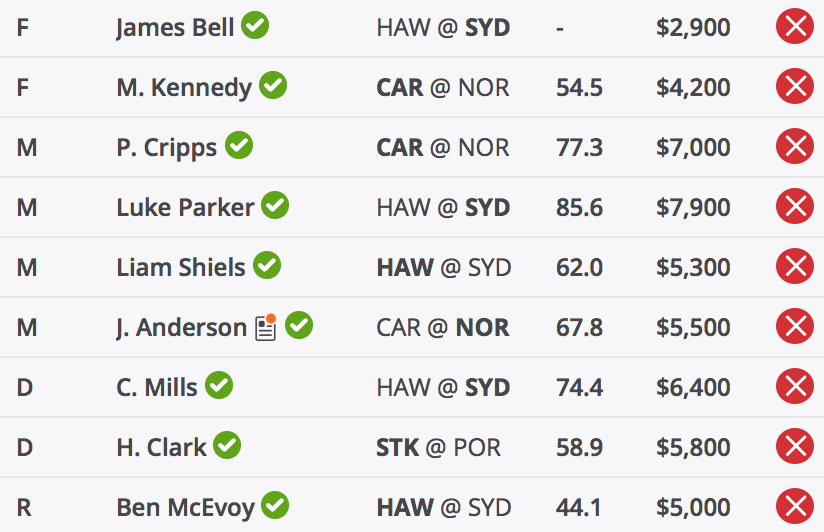