Gear up for our last multi game slate of the season with a finals version of Super Saturday as we get a double header of games. The daily fantasy providers have come through with a huge offering of contests:

Conditions look good for football against tomorrow with little to no rainfall expected across the locations. There may be a little drizzle in Perth, but not enough to have a significant impact on the game.

This is the obvious play of the slate with Collingwood giving up the most points in the league this season to defenders and West Coast loving to control the ball across their back line. I will be stacking up the Eagles backs on this slate in all shapes and sizes.

A consistent trend we have seen in recent years is attacking the Western Bulldogs via the forward line. This year has been no different with the Dogs giving up the 4th most points to the position this year at over 4 points per game above the league average.

The ruck play is staring us right in the face on this slate. West Coast vs Collingwood presents a stalemate from a fantasy scoring perspective as Nic Naitanaui and Brodie Grundy will stifle each other. Meanwhile in the other contest we see the Saints dual setup of Ryder and Marshall with the best matchup in the league for their position. Tim English has given up 76 points per game to the opposition's number 1 ruck this year, which is over 6 points above league average and the highest mark in the entire league.

Love to target some of the St Kilda forwards here and try and find some value on a slate not offering much in that price range. As noted in the breakdown above the Bulldogs have been scored upon by opposition forwards all season and Membrey should have a solid matchup. We know he offers GPP winning upside with a season high of 85, and earlier in the year when he faced the Bulldogs, he posted a 68 point fantasy game. Kent is another value play with sufficient upside. He has a season high of 76 points and posted a 52 and 70 point game in his last 3 games.

All season trying to find a play between Ryder and Marshall has been a challenge with the ruck duties being split. However, as the season drew to a close it became clear that the Saints preferred Ryder in the ruck, while Marshall played forward and pushed up the ground. In the last three games you can see from our ruck tool that Ryder was ranging from 67 - 93% of the ruck work. This is valuable for this slate given he has the top matchup in the league against English. Ryder has shown GPP winning upside with a massive 95-point game against West Coast in the second last game of the season.

As mentioned at the top, West Coast backs are the play of the slate. Collingwood give up the most points in the league to the position while West Coast love to set up their attack from the back half. Hurn really stood tall in the last three weeks of the season with two 90+ point games, while Sheppard has been brilliant all year. I love linking these two together or finding a value play to paid with them.

This is a lock and load play. Shuey is simply too cheap and has a ridiculous record in finals games. Sure, he is first up from a hamstring injury but I can’t look past this price tag on a player who has 100+ point upside and has averaged a shade under 100 points from his last 5 finals games.

Easy to see where I am headed on this slate. Love linking Gaff up with the Eagles backs. At home in Perth in this matchup they should likely fill up from a fantasy scoring perspective. Gaff is well priced for a player with 120 point upside and earlier this year when the Eagles faced the Magpies he dropped a massive 126 point game. 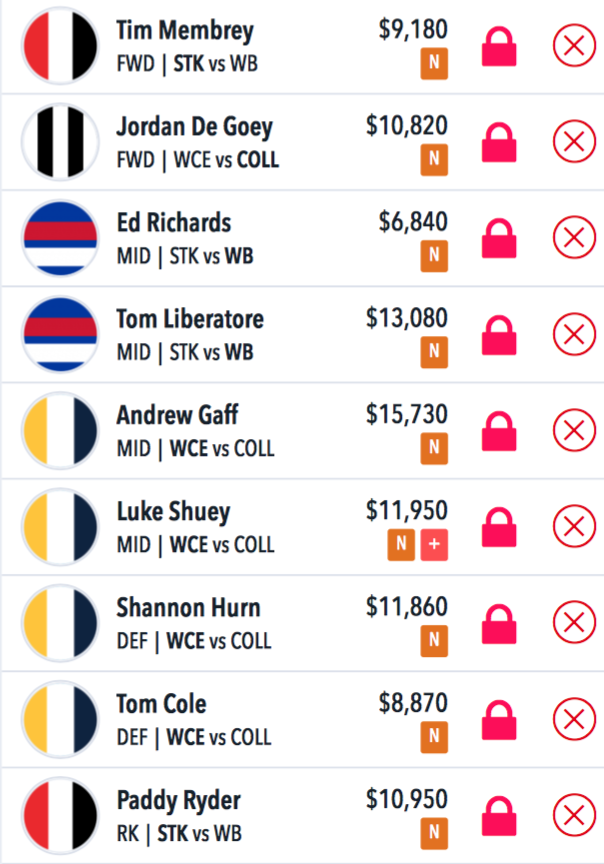 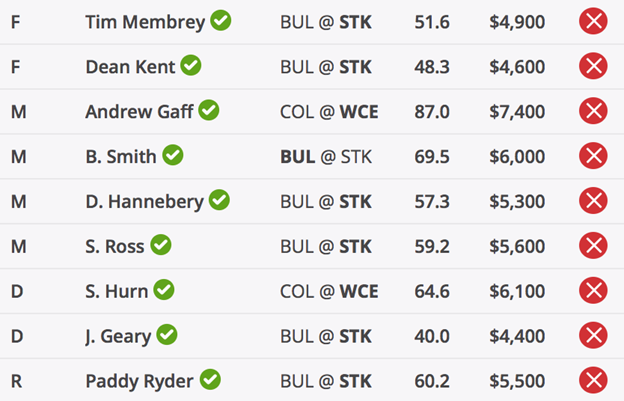