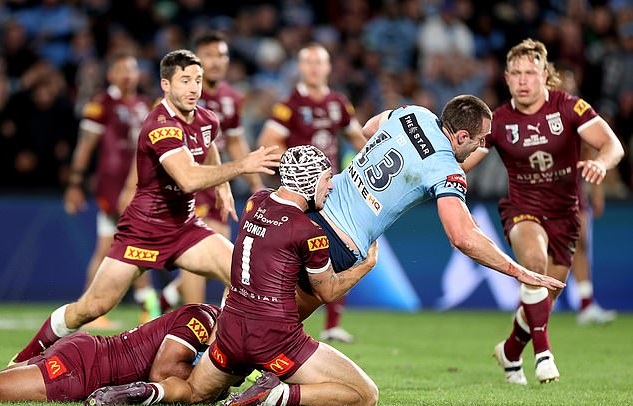 It’s a bit of an empty week on the NRL landscape…if you don’t count a bevy of international matches and State Of Origin game 2 to close the festivities on Sunday night. This time we head over to Perth and Optus Stadium, where at 7:50pm AEST New South Wales and Queensland will battle it out on neutral turf. Queensland of course pinched game 1 to have the upper hand in the series, and the entire NSW setup is now under immense pressure to right the ship. It should be another tight and fascinating contest.

Draftstars has a massive $40,000 contest with $3915 to first place. There are also several other contests including the Mini, Micro, and the High Roller.

NSW has made a hefty five changes after Origin 1, with only 1-2 of them forced. Centres Jack Wighton and Kotoni Staggs both have issues that have ruled them out, with Matt Burton to debut at left centre and Stephen Crichton to get his first start on the right side. That’s effectively a double Panthers connection to go with the other 3 in the backline (and 3 in the pack). Tariq Sims, Ryan Matterson and Reagan Campbell-Gillard have all lost their spots in somewhat controversial decision. Jake Trbojevic will start at prop, and Angus Crichton and Siosifa Talakai come onto the bench. Api Koroisau also joins the team, and has been named to start at hooker with Damien Cook relegated to the bench. That is a real head-scratcher and if it stays that way at kickoff both will be hard to play with the minutes split very tough to predict.

QLD get to play the role of calm series leaders, only making two forced changes after injuries to Reuben Cotter and Xavier Coates. Murray Taulagi replaces the winger for his Origin debut. Lindsay Collins moves into the starting team for Cotter, with Jai Arrow joining the bench as a like-for-like replacement. With very few exceptions, this is a team of players in good form at club level, and and is hard to fault.

Origin fantasy is a bit of an enigma. The scores are pretty similar to the NRL, but it can be hard working out how players in different roles will fare or which forwards will play less minutes than they do at club level. In general we can expect most players to score a little worse than they do in NRL games as they have to share the workload with other star players. The absolute best players (Tedesco, Cleary) still dominate though. The pricing is the other big variable, with a lot of players FAR cheaper than they are at NRL level, with incredible values everywhere you look. I’ll highlight a few more players in this article than usual to account for this.

The odds have drifted a bit towards QLD after game 1, but NSW have still held onto favouritism. I can’t call it anything other than a true 50/50, with the NSW core of 8 Panthers (if Burton is generously included) and 3 Roosters perhaps the reason that the team is still tough to beat on paper. New QLD coach Billy Slater seems to be made for the arena, which along with some good form might be the teams biggest edge.

Once again, it’s James Tedesco and then the rest. Teddy is at 19K, with everyone else in the 10-12 range. Brian To’o and Valentine Holmes are the form option for each team from he cheaper group, with both at least the equal of everyone else in terms of raw fantasy points. Kalyn Ponga and Dane Gagai both struggled from a fantasy perspective in game 1, as they have been at the Knights recently. Historically they’re both strong scorers, so it could be a risk worth taking that they rise to the occasion and provide some strong value. The rest of the wingers are middling prospects at best, and should only be used as punt options for otherwise chalky lineups. Stephen Crichton projects as close to the best value of the lot if he can replicate his 40 point average from the Panthers, and given how many of his teammates are around him I’d say it’s very possible.

The Queensland halves blew this position out of the water in game 1, particularly Cam Munster. Both he and Daly Cherry-Evans are strong values for their usual output, but Nathan Cleary is generally the superior scorer of the 3 and isn’t much more expensive. I can’t knock any of them, but will be prioritising Cleary. Jarome Luai is the other half, and he scored beautifully ing game 1 and has been in excellent form at NRL level. He’s cheap enough to be an option again, but I prefer the stronger history and much bigger ceilings of the more expensive options. As I already mentioned, the NSW hooker split is unpredictable and I’m inclined to stay away. Queensland isn’t much better, but it at least played out roughly as expected in game 1 with Harry Grant getting the bigger share of the role. He’s my pick of the hookers with the ability to rack up points quickly and punch out a ceiling score no matter how long he’s on the field.

The forwards are probably the hardest hit in terms of reduced scoring in Origin compared to clubland. The roles are unpredictable and interchangeable, as evidenced by Liam Martins late switch to starting (80 minutes) and Patrick Carrigan racking up a big score off the bench. Some strong efforts that I think can be repeated are Payne Haas and Tino Fa’asuamaleaui, each the dominant young option for their team wreaking havoc int he middle of the field. Isaah Yeo for some reason consistently scores worse in Origin than at NRL level, so is hard to play at one of the higher prices. Cam Murray is the same if he ends up on the bench again, but has a ceiling if he gets the start this time (as I expect he will). The rest of the QLD pack has middling veterans Josh Papalii, Felise Kaufusi and Kurt Capewell who are all relevant, but not overly likely to provide the ceiling score to win the slate. I’d rather take a shot at the younger Lindsay Collins who gets the start and has been growing into some nice form at club level after last seasons ACL. Liam Martin could see 80 minutes again, but I think he projects closer to 40 than last games 50+, so is far from a must-have. Jake Trbojevic feels irrelevant with a complete lack of ceiling, and the bench players are basically a raffle with Carrigan and Crichton the two most likely to find a big role and pay off middling price tags.

Finally, Matt Burton gets his own paragraph because he’s listed as a FWD despite it being the only position that doesn’t apply to him. He’s priced like Jack Wighton was in the same role, which Wighton managed to pay off out of nowhere. Burton does have the ceiling to do the same if he can get over the line at least once (probably twice), but he doesn’t project as a particularly good value given the soft pricing. It might be better to bet on him to score a try than worry about using him in DFS. 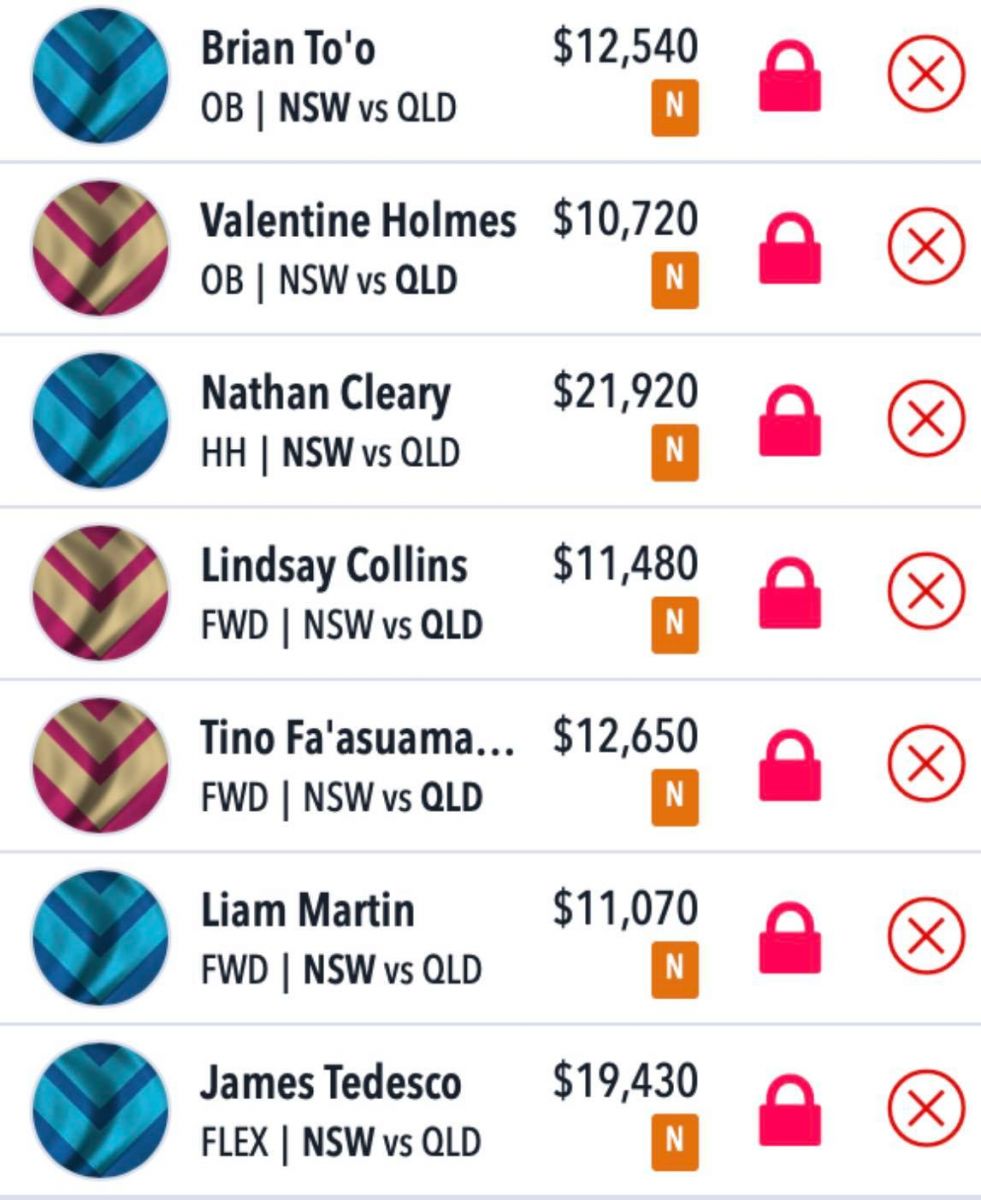