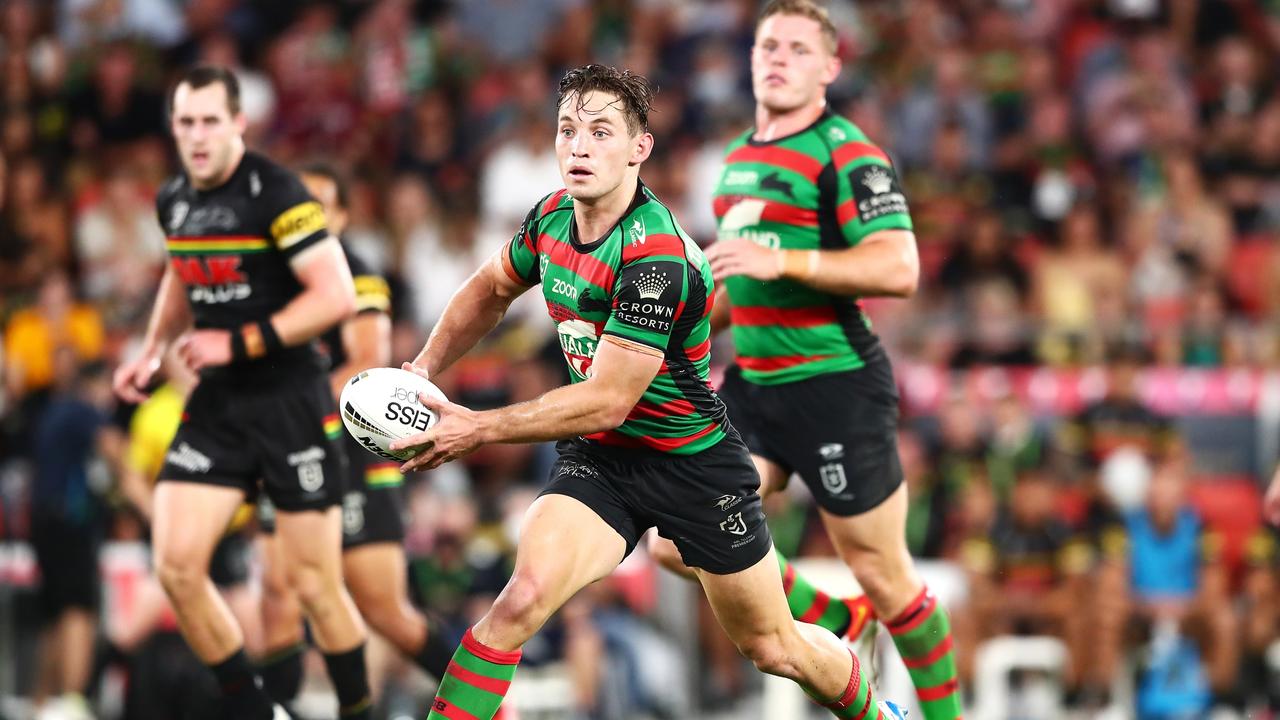 Round 21 Super Saturday kicks off with a lopsided contest, when the Rabbitohs take their home game against the Warriors to the Sunshine Coast Stadium at Bokarina. The Rabbitohs have hit their straps over the past couple of months, winning 7 of their past 10, whilst the Warriors have 1 win in the same period.

Up next, a crucial clash in the Nation’s Capital, where the new-look Panthers’ halves pairing of Jaeman Salmon and Sean O’Sullivan will look to get the Panthers 2 points closer to the Minor Premiership, when they take on a charging Raiders outfit that are desperate for the win. After a spiteful encounter in round 7 at BlueBet Stadium, you can be sure the natives will be restless and giving the Panthers plenty from the stands.

Finally, a traditional derby takes place at Pointsbet Stadium, when the 3rd placed Sharks host the 11th placed Dragons. A loss here for the Dragons would surely confirm their finals hopes are dashed, whilst a win for the Sharks will push them closer to a top 4 birth.

Draftstars has a $3,000 contest with $411 to first place. There are also several other contests including the Mini, Micro, and the High Roller.

The Rabbitohs have made 3 changes after last weeks’ loss to the Sharks, with Taane Milne named at centre for the injured Jed Cartwright (hamstring). Kodi Nikorima has been replaced on the bench by Blake Taafe, and Thomas Burgess (suspension) is out, with Mark Nicholls replacing him on the bench.

Changes aplenty at the Warriors, starting with Euan Aitken replacing Adam Pompey at centre. Chanel Harris-Tavita (knee) is out, replaced at five eighth by Wayde Egan, with Freddy Lussick getting the start at hooker. Jazz Tevaga (shoulder) is out, with Josh Curran relegated to the bench. This means an entirely new backrow for the Warriors, with Bayley Sironen, Jack Murchie and Aaron Pene named. Taniela Otukolo joins the bench, at the expense of Jackson Frei.

The Raiders welcome back Jordan Rapana at the expense of Albert Hopoate. No other changes for the Raiders, who are at full strength.

The Panthers lose halfback and co-captain Nathan Cleary for 5 weeks, after his horrendous tackle on Dylan Brown last week. Cleary is replaced in the halves by Jaeman Salmon (5/8), with Sean O’Sullivan taking over at halfback. Stephen Crichton is back, pushing Robert Jennings back to Reserve Grade, with Mitch Kenny added to the bench.

The Sharks lose Will Kennedy (ankle), with Kade Dykes named to make his first-grade debut at fullback. Braden Hamlin-Uele has been promoted to the starting side, with Royce Hunt dropped. Braydon Trindall joins the bench.

Finally, the Dragons have made zero changes to the 17 that were destroyed 34-8 last week at home, in another sign of coach Anthony Griffin having absolutely no idea.

A day game for this Rabbitohs squad could be concerning for the Warriors, and a 50-point performance could easily be on the cards here. Concentrate on the left-side of this Rabbitohs’ attack, which has been on fire of late.

I really like the Raiders in game two of Super Saturday. They will be extra motivated after the Panthers’ fans famously angered the Raiders in Penrith earlier this season with mocking Viking claps, and this clash could turn spiteful early on. Not sure either side will score freely in this clash, however there are several solid plays for each side to keep our eyes on.

Finally, the Sharks should have far too much for the Dragons in this local derby. The Dragons look devoid of any confidence, and it appears as though Griffin has lost the locker room. If the Sharks play the full 80 at high intensity, this could be a blow out.

Murray consistently gets the job done, and appears to be hitting top form coming out of Origin and heading towards the finals. Hasn’t scored a try for nearly two months, so you would say he is due. The Warriors aren’t horrible at conceding tries through the middle, however with a massive changeup in their forward pack this week, could be susceptible through the middle. Even if Murray doesn’t get you attacking stats, he churns through the work and won’t let you down.

Rinse and repeat for the best fantasy player of 2022. Scored another 70 last week with a minimum of fuss, with 11 scores of 70 or more he is super consistent and always a chance at breaking 80+ with attacking stats. Scored 95.81 against the Dragons in round 3, don’t be surprised with another score in the vicinity of 100 with the Dragons all but giving up on their season.

Dykes’ game sets up beautifully for Fantasy. A ball playing five eighth come fullback, Dykes can create as well as finish opportunities. He’s also not afraid to get through work, and regularly breaks tackles. Lachlan Miller debuted against the Titans back in round 11, punching out 69 points. Dykes has a great chance to come into this Sharks side against the team that is struggling and score 50+ quite easily. At bottom dollar, he must be picked.

The second highest priced OB for this slate, Aitken has spent the entire season in the second row and averaged 49. I’ve got to believe this is the reason for his high price, however the change from second row to centre will severely lower his base statistics. At this price, you’re expecting an OB to score at least one try, and against the Rabbitohs I can’t see the Warriors scoring many. Far too expensive and can’t be considered.

Yeo is a solid Draftstars player, and his involvement will likely increase with the losses of Cleary and Luai, however without those two men outside him, Yeo’s effectiveness will surely drop. Will still get through mountains of work, however without his attacking statistics he is not worth the price. Far better options around this price include Tapine, Murray, McInnes and Koloamatangi.

The most expensive OB, by some margin, Mitchell is a picture of inconsistency. This is mainly down to the fact Latrell doesn’t get through much work. Despite this, he’s always capable of a massive game, it all comes down to what he does with his limited touches. Mitchell is the sort of player that can win you money, but is just as likely to cost you any chance at a cash prize. Tying up so much capital in an unknown is always a worry, and he proves to be a massive gamble week after week in Draftstars. 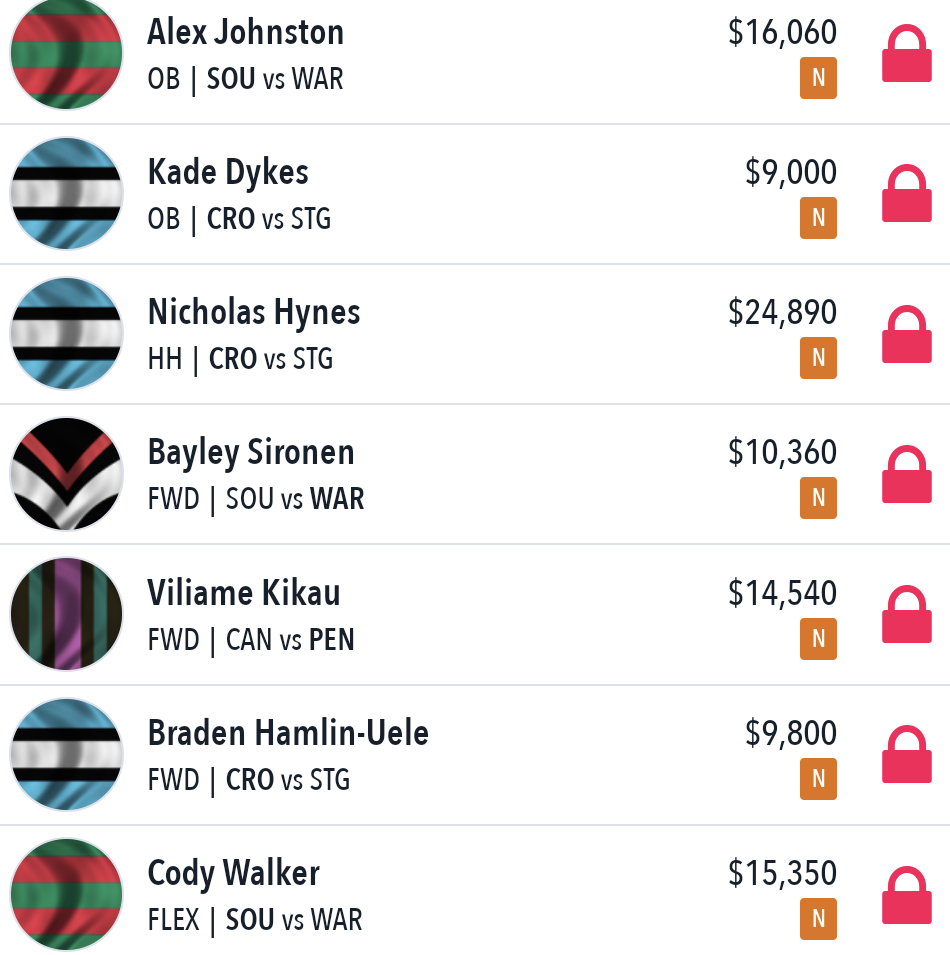