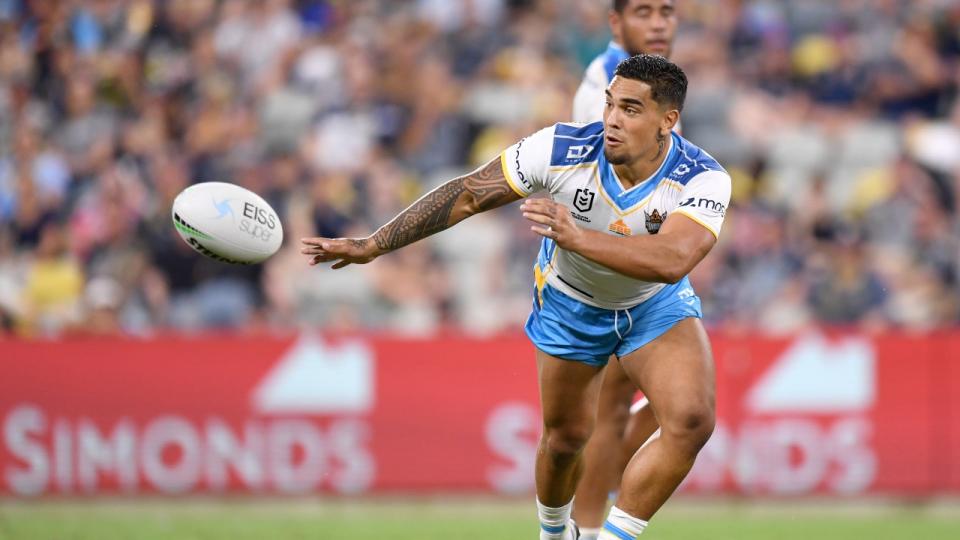 Our Friday night double header looks pretty typical in Rd 21, with an average game followed by a potential cracker. The entree kicks off at 6pm with the Melbourne Storm (4th) hosting the Gold Coast Titans (16th) at AAMI Park. Then at 7:55pm the Manly Sea Eagles (10th) welcome the Parramatta Eels (6th) to 4 Pines Park. Anything can happen in the NRL, but we should see much better footy in the second game.

Draftstars has a $3000 contest with $411 to first place. The single game contests are set at $8000 and $10,000 respectively. There are also several other contests including the Mini & Micro.

The Storm have three changes. They’ve lost Nick Meaney (injury) and Justin Olam (COVID), With Tyran Wishart promoted to fullback, Grant Anderson shifting to centre, and David Nofoaluma making his Storm debut on the wing as a loan player. Alec Macdonald drops off the bench with the returning Brandon Smith and Chris Lewis filling the vacant spots. Josh King (lock) and Tui Kamikamica (bench) are have switched, but may revert before kick-off.

The Titans only have one change, but it sparks a significant reshuffle. Toby Sexton has been dropped/rested from halfback. Tanah Boyd moves into his spot, with AJ Brimson shifting to five-eight and Jayden Campbell promoted from the bench at fullback. Greg Marzhew comes onto the bench to fill the utility role. Erin Clark continues his run in the lock role where he is clearly a far better scorer than at hooker.

It’s a pain to run through Manly’s 6 changes, so I’ll be quick. The players who sat out last week’s game and are now returning are Olakau’atu, Sipley, Tuipolotu, Koula and Saab. Making way for them are De Luis, Bullemor, Seci, Smalley, Fulton and Segeyaro. Ben Trbojevic also joins the bench after missing a week with a head knock.

The Eels have one change, and it’s a biggie. Mitch Moses (injury) is out, and replaced at halfback by coach’s son Jake Arthur. He’s no Nathan Cleary, so it’s likely that Dylan Brown takes on a bigger workload. Clint Gutherson will also potentially benefit from making over the goal kicking duties.

The Storm as such massive favourites is a little surprising to me. They’ve really struggled and have only lost more players to injury, although Smith and Nofoaluma are good “ins”. Of course the Titans are truly bad, but the team is still loaded with potential and I give them a decent chance of causing an upset (~30%). The odds for the second game are based heavily on Moses being out. That’s fair enough, but I still think the Eels are a 50/50 proposition at worst against an unsettled Manly team missing it’s best player. My favourite play is a few Titans with a balance of players from the late game.

The son of a gun has shown plenty this year, and is back in his preferred spot after being eased back from injury off the bench. The Titans need as much spark as they can get, and putting the ball in his hands is perhaps their best chance to do so (seeing as they won’t give it to David Fifita). Melbourne are not exactly a defensive powerhouse right now, so I’m not scared to play a high-ceiling player who is a bit too cheap against them.

Clark is following in the footsteps of players like Havili and Hastings this season, by showing that his skillset is best used at lock thanks to powerful and mobile running game (along with some passing touch). Once again, the Titans are searching for answers, and after a positive start I can’t see them veering from feeding Clark big minutes in this role. He likely projects for something close to 50 points, which makes him a solid value with plenty of upside if he can be part of an upset victory.

At a HH position loaded with question marks over form, role and team performance…DCE stands out as a dependable stud who will rarely let us down despite the big price tag. While some of the guys directly below him are interesting and possess plenty of upside, Cherry-Evans is the best scorer of the lot and is poised for a big game given the expected close scoreline. I’ll be playing him here fairly often and reaching for one of the shakier options in the FLEX spot.

This is a harsh call that could easily backfire, but Hughes is the expensive guy that interests me least at HH. His scoring has been down this season when next to Munster, who has been playing a more dominant role. Given that I don’t see Melbourne trouncing the Titans, I don’t see where the 75+ score he needs will come from. Spending a little more for Harry Grant is more appealing.

There are a number of spend up spots on this slate, but OB doesn’t seem to be it for me. Garrick is almost 5K more than the second most expensive player, and has a tough matchup against the Eels. He does have enough ceiling to be a viable play, but I’m happy to run the gauntlet with so many potential value plays down the bottom.

Boyd stands to benefit from Sexton being out, as he now looks to be the controlling half next to Brimson. He’s only been the halfback once before (in 2019), when he scored 43 points and had a career high 291 kick metres. He’s averaged around 50 metres as a five-eight since then, so stands to gain ~12 points per game from that alone. That potentially makes him a 40-45 scorer, so we’d just have to hope that the Storm don’t dominate and repress his scoring to the low 30s. It looks like a pretty strong option. 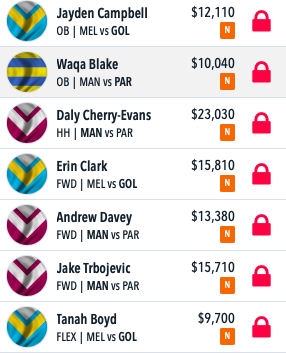