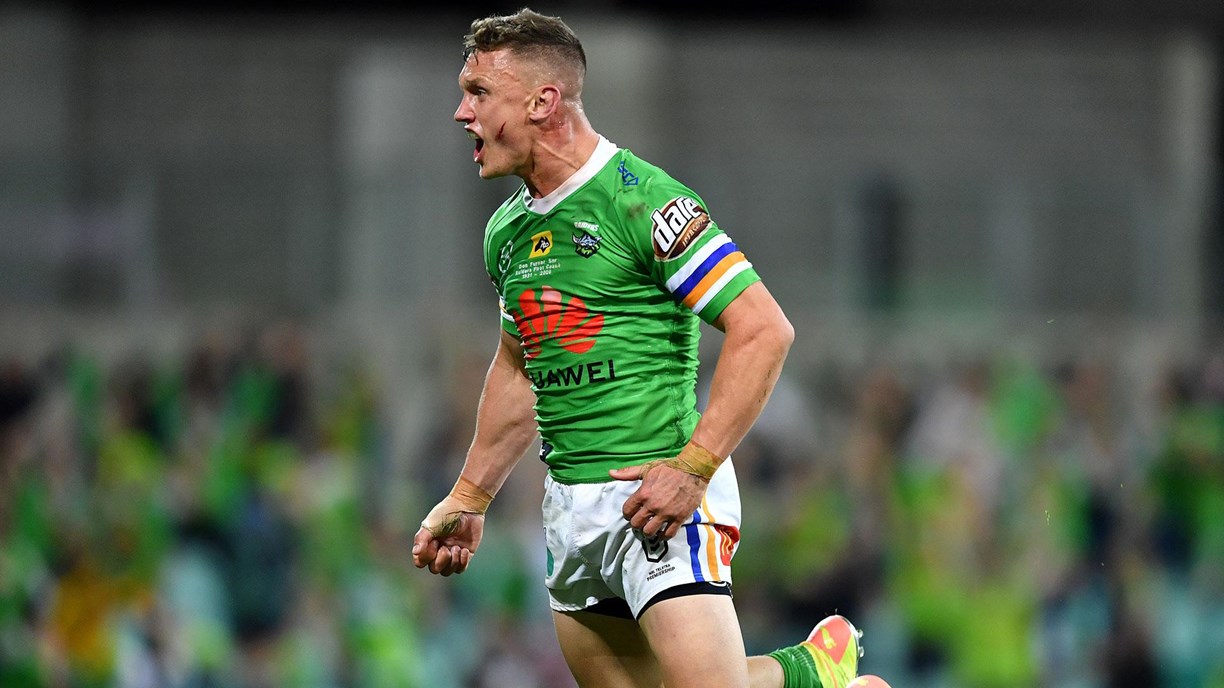 Two massive clashes greet us later on Super Saturday, however first up it will be the Raiders hosting the Warriors at GIO Stadium. Fresh off an upset win over the Storm last week in Melbourne, the Raiders will be looking to continue their rich vein of form in a matchup they will expect to win.

In game 2, we see a 1v3 clash, when the Panthers take on the Sharks at Bluebet Stadium. These are arguably the two form sides of the competition, with the Panthers winners of 8 straight, and the Sharks winning 5 straight. Despite being 8 points clear of the chasing pack, do not expect the Panthers to take this game lightly. Should be a cracking contest.

Finally, the stumbling Storm head to Sydney to take on the surging Rabbitohs, in a clash that could have massive repercussions on the top 4. The Storm have lost 3 straight for the first time since the 2015 NRL season, and are desperate to get their crumbling season back on track. It won’t be made easy, with the Latrell Mitchell led Rabbitohs playing some dazzling attacking football over the past 3 weeks. Strap in.

Forced changes at the Raiders, with Jordan Rapana (suspension) and James Schiller (ankle) both out, being replaced by Nick Cotric and Albert Hopoate. Elliott Whitehead returns on the edge, pushing Adam Elliott to lock and shifting Corey Harawira-Naera to the bench. No other changes.

The Warriors have made a huge call, with fullback Reece Walsh benched, with talk of him leaving the club early to link up with the Storm for the remainder of 2022. Chanel Harris-Tavita will start at fullback, with Dejarn Asi named at five eighth. Edward Kosi has been dropped with the return of Dallin Watene-Zelezniak on the wing. Freddy Lussick makes way on the bench for Walsh.

The Panthers have brought all their Origin stars back, and the only notable change to their squad from pre-Origin is Spencer Leniu being dropped in favour of Matt Eisenhuth.

The Sharks have a big out, with Sione Katoa (pec) gone for the year, with Connor Tracey replacing him on the wing, and Siosifa Talakai replacing Tracey in the centres. Braden Hamlin-Uele returns to the bench, replacing Aiden Tolman who gets relegated to the reserves.

For the Rabbitohs, they welcome back Damien Cook and Cam Murray, replacing Silva Havili (interchange) and Davvy Moale (interchange) respectively. Taane Milne is out, replaced at right centre by Jed Cartwright. Daniel Suluka-Fifita is 18th man.

Finally, the Storm lose Ryan Papenhuyzen (knee) for the season, in a bitter blow for their title aspirations. Nick Meaney replaces Papenhuyzen at fullback, with Tyran Wishart set to replace Meaney on the wing. Grant Anderson replaces Wishart on the bench in the only other change to last week’s 17.

The Raiders host the Warriors in a game that Coach Ricky Stuart must surely view as a must-win, with the Raiders currently on the outside looking in. The Warriors have won 3 of their past 4 clashes at GIO Stadium, however I believe this year will prove different. The Raiders are surely full of confidence after travelling to Melbourne and beating the Storm last week, and I believe they’ll kick on this week and beat the Warriors soundly. Look for the Raiders to attack the left side of the field, with Jack Wighton, Sebastian Kris and Nick Cotric all likely to figure in try scoring raids.

Next up, a real grind is on the cards in Penrith, as the Panthers host the Sharks. This is a true heat check for the Sharks to see if they are a top 4 worthy side. Yes, they have beaten the Storm and Cowboys in consecutive weeks, however both those sides were missing plenty of talent. The Panthers won’t be, and in front of their home fans will prove the toughest test the Sharks will face. It’s a fascinating contest, and I believe the Panthers will just sneak home. Look for points to be at a premium here.

Finally, the Rabbitohs host the Storm in a clash that should give a very compelling sign as to where these sides are. The Rabbitohs have been brilliant since the return of Latrell Mitchell, but if anyone can shut him down, it’s the Storm. This clash screams points, however, with how much is on the line and the predicted stormy weather, we could be in for a real grind in this clash. Either way, I expect a one score game and a thrilling finish.

Wow, there’s some absolute weapons to choose from this Saturday. Cook, Hynes, Munster, the Raiders forwards and, of course, Cleary. The Panthers halfback has 1 score under 50 all year (round 1 – 49.9), and since then only has 2 scores under 60. Is super consistent, and in a game where field position could be crucial, his kicking game will steer the Panthers around beautifully. Can’t go wrong with any of the studs on offer this week, but I’ll go with Cleary to bounce back after the loss in Origin III.

Elliott just keeps getting the job done. Hasn’t scored below 58.6 over the past 5 weeks and is a cheaper way into the super Raiders pack than Tapine and Young. Knows his way to the try line, however even if he doesn’t get there, you can be sure he won’t let you down. Playing the Warriors this week gives him a great chance at getting back into the try scoring list.

This is a little more speculative, but you just can’t ignore the sheer amount of tries AJ can score. With 13 tries in his past 7 matches, and the left side of the Rabbitohs attack humming, I’m betting on the Rabbits’ winger crossing for at least one against a shaky right side Storm defence. Has scored 4 tries in his past 5 against the Storm, so the opposition won’t scare him.

Ok, hear me out. The Storm middle third defence is as good as anyone in the competition, and they will be as good as any team to shut down the dummy half runs of Cook. The Rabbits’ hooker scored under 50 in the round 2 clash between these sides, one of only two occasions he’s failed to hit the half century. Could easily score big, as he usually does, but I believe there are far better options at that price point, and slightly below.

Love him as a player and have him close to the most improved over the past 3 seasons, however he gains a lot of his points from big kick return metres. This clash should be fascinating in relation to this metric, with the Panthers easily the best team at kick return metres per game, whilst the Sharks are easily the best at reducing these metres. With his metres reduced, Edwards will have to rely on attacking stats, something he isn’t great at, with only 5 tries and 6 try assists this season.

Along with Latrell Mitchell, Walker could take this game by the scruff of the neck and pull the Rabbitohs right into contention for a top 4 spot. However, if the Storm can manage to get under the skin of Walker, he has shown that he can let it get to him and really effect his game. Needs to remain calm under pressure, something I’m not sure he’s capable of. Still, on his day can rack up the points. 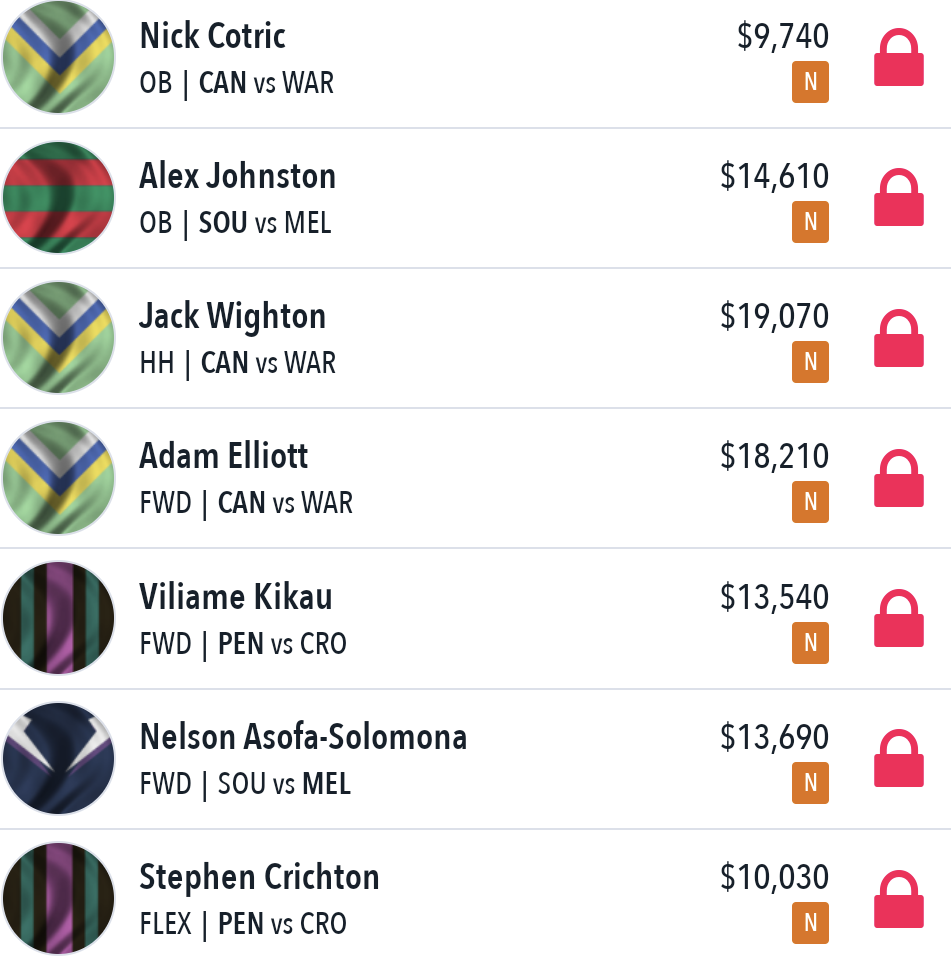