The Friday night action in Round 16 of the NRL brings us two rather intriguing matchups at opposite ends of the table. First, at 6pm the Newcastle Knights (12th) host the Gold Coast Titans (16th) at McDonald Jones Stadium. The Titans will be super keen to get off the bottom of the ladder, while the Knights will be smarting after a last minute loss in Round 15. Then, at 7:55pm the Penrith Panthers (1st) welcome the Sydney Roosters (9th) to BlueBet Stadium. While it’s a tall task, this is an opportunity for an inconsistent Roosters team to get their season moving in the right direction.

Draftstars has a $3000 contest with $411 to first place. The single game contests are set at $10,000 and $12,000 respectively. There are also several other contests including the Mini, Micro, and the High Roller.

The Knights only change is a big one, with their star fullback Kalyn Ponga being rested after Origin. Tex Hoy comes in to take his spot, and will likely take the goal kicking duties as well. The halves combo of Milford and Clune gets another game together, with some promising signs int heir narrow loss last week.

The Titans also have just the one change, but this time their star player is coming in, with David Fifita joining the bench. Sam Lisone is the one to drop out. The Titans also have a fresh halves combination with Sexton and Turner both very young and inconsistent.

Pending their seven (7!) Origin reps being ready to back up, the Panthers are unchanged from Rd 15. There isn’t much to add about such a consistent team, but I will say that we haven’t seen a ceiling score from Tago or May on the left edge for 5 weeks…more on that later.

To top off a snooze-fest of a teams section, the Roosters also have just the one change. Victor Radley is fit to return at lock, with Nat Butcher dropping back to the bench and Daniel Suluka-Fifita out of the team. The Walker/Hutchison halves combo had success in 2021, while the Verills/Watson hooker timeshare will be an interesting puzzle to solve when working out if either is worth playing (probably not).

The Knights and Titans are pretty much the same team at the moment, with very little defensive starch and wildly inconsistent attacking capabilities (mostly bad). Without Ponga, I think the Knights will have a hard time making good on their favourites tag unless they turn this into a tight slog. Then, the Roosters are a good team, but the Panthers are a GREAT team and it’s very hard to see any sort of complacency or Origin fatigue bothering them with such a big gap in skill. Bringing line-ups home with a few Panthers players seems like a wise idea.

I failed when saying he was a lock in Rd 15, limping to 36 points in the same role he’s playing this week (halfback). Still, he averaged close to 50 in a full season playing this role last season, and I think something around the 45 mark is a reasonable expectation. That looks to be the best value on the slate, even allowing for the brutal Panthers matchup. A Cleary/Hutchison combo could be a great way to bring your line-up home strong alongside some riskier selections.

Tago has played all 15 games in breakout season, and put up a very solid 42 point average. That has included 3 60+ “ceiling scores”, and another couple around the 50 mark. That means there is roughly a 33% chance that he’s a must-have at this price, and with 13/15 scores over 30 it’s extremely unlikely that he lets you down too badly if he ends up with 30-something points. There are of course a number of his teammates who look like strong plays in the OB position, chiefly Brian To’o and Taylan May who are both too cheap for their similarly strong ceilings. I’d say any 2 Panthers outside backs is the winning play on this slate, but Tago is the pick of the bunch on price.

Mann’s season was derailed by injury after a solid start, but he resumed the starting lock role last week and punched out 57 points in a strong display. The Knights seem to love what he offers in the middle of the field, and a 45+ average makes him a solid value at this price. We’ve already seen one 70+ score this year, so there is plenty of upside to go with the safe value. The Titans matchup could go in either direction, but he can combine a strong workload with some attacking upside to provide plenty of impetus to our fantasy line-ups in the early game.

I’ve chosen Fermor for this spot because he projects similarly to Mann, but is 3K more expensive. While he’s another having an excellent breakout season, I think a run of good recent scores means that both his price and ownership have gotten a little excessive. Some natural regression should drag his scoring back a little, but if you need another reason the inclusion of David Fifita on the bench could reduce his role. While I doubt Fifita directly impacts his minutes, he will attract more of the ball when he comes onto the field and perhaps dry up Fermor’s opportunities to attack not he left side. I like the player, but I don’t want to play him on this slate.

The enigmatic half has now played 4 games as a Knight, and while we’ve seen flashes of his brilliance he’s largely struggled to impact games and has only averaged 36 in the fantasy world. The numbers suggest that teams are targeting him in defence with 5 more tackles per game than his career level, as well as double the missed tackles (5 per game). With limited attacking statistics on a struggling team, even the lions share of the kicking duties while playing next to Clune can’t save him. Despite this being the best matchup he’s had this season, the price is just far too high to consider taking a shot at a magical Milford ceiling game.

I’ve accidentally gone heavier on the early game in this preview, but that is because there are far more unknowns and the game could be a high-scoring affair due to no defence, or a slog-fest as two bad teams struggle to control the ball. If it’s the former, I think Turner could be one that has a lot of upside. It’s a shame that he shares a price and position with my headline pick in Hutchison, because he’s shown in 4 career starts that he can post something around the 50 mark on the back of decent defensive work and a strong running game (tackle breaks). If the attacking statistics come along for the ride it’s not impossible that Turner becomes the value HH instead of Hutchison, whilst coming with a fraction of the ownership. Or, he could stink. Who knows! 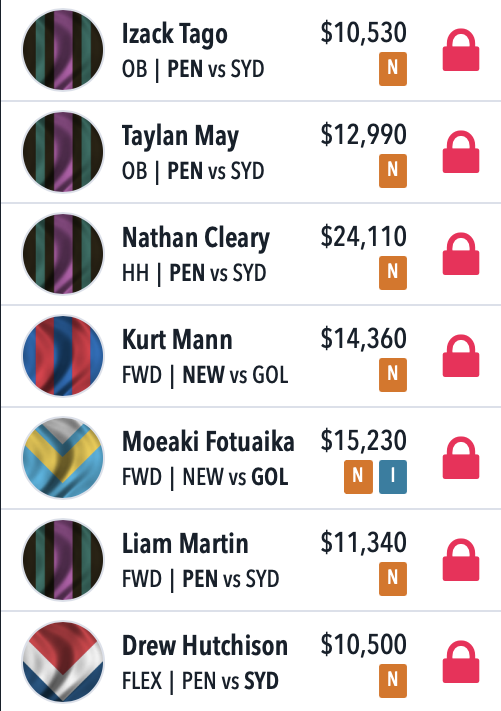