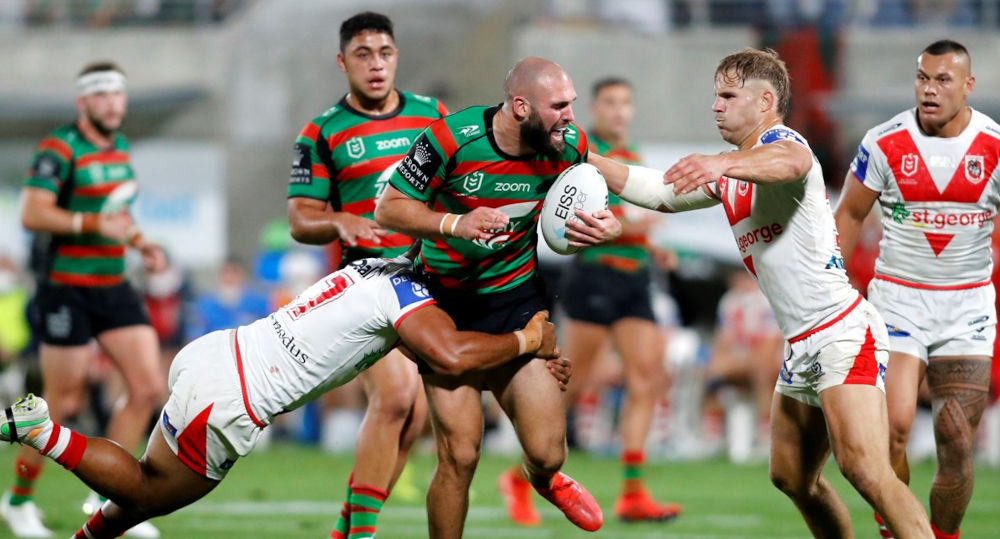 Round 15 brings us back to bit of normality in the NRL, with a full slate of games and all Origin guns back on board. We start at 7:50pm on Thursday with the St George Illawarra Dragons (10th) hosting the South Sydney Rabbitohs (7th) at WIN Stadium. The Dragons have been alternating wins and losses for a while now, since losing to the Rabbits two months ago. The Rabbitohs have won their last two and four of their last 5. They’re still not at 2021 levels, but things are looking up for the team.

Draftstars have put up a $15,000 contest for the match with $1,133 to the winner. There are also several other contests including the $2 Mini and 50c Micro to jump into.

The Dragons have a number of changes. Both wings see a swap, with Mat Feagai and Mikaele Ravalawa returning in place of Moga and Reuben. All of Andrew McCullouggh, Jaydn Su’a and Tariq Sims come into the starting 13, with Josh McGuire out of the team and Moses Mbye and Frank Molo both dropping back to the bench. The only change for the Rabbitohs is Blake Taaffe rejoining the bench in place of Peter Mamouzelos. At this point it’s really only Latrell Mitchell that the team is missing, with  everyone else performing admirably in their roles.

Tough to argue with these odds on recent form, but the Dragons are at home and not far behind over the course of the season.

Milne is playing some of his best football this season after taking a long time to get going in the NRL. It’s still only translated to a 30 average similar to last season, but already that has amounted to 4 40+ scores in 5 games. His price has stayed low, and I see no reason that he can’t poke some more holes in the Dragons defensive line this week. It helps that he seems to have settled at right centre after being moved throughout the backline earlier in the season.

In seasons past, Macca has been a solid 50+ scorer without much of an impressive ceiling. That number has certainly dropped in recent times, as he’s on the wrong side of 30 and sharing the role more and more with various other utility types. This week it’s Mbye, but they’ve swapped spots with McCullough starting. I’d guess 55+ minutes for 45 points is a median outcome, but there is plenty of upside if Mbye is required to play a different role in the team to cover an injury. It’s not a slam dunk, but the HH position is devoid of much value and the veteran hooker likes like the cash play to me at the very least.

Another position that lacks a standout option is at FWD although perhaps more so because there is too much value available. I’ll admit the it’s hard to look past Cam Murray as a huge scorer at a discounted price, and it’s not that hard to afford him. But, I’ll highlight Bird as a less obvious GPP play who could win a contest. With a top score of 46 this season, he doesn’t stand out as a good ceiling play. He has not been at his tackle breaking best, but he does have a ceiling of 60+ if he gets things back on track after the bye. It’s worth a sprinkle.

In contrast De Belin hasn’t been scoring much better than Bird, with the exception of last week's season high 64. Another Dragon on the wrong side of 30, but much more expensive than the above options, I’m inclined to expect a score closer to his regular 45-50s than anything significant. If it makes any difference he’s been shifted from lock to prop on the team sheet this week, which could come with a slight reduction in minutes.

I could have selected Kodi Nikorima in this spot, as both players have shown flashes of scoring potential in these roles but for the most part have been underwhelming. At this point we know what Niokrima is, so I’ll focus on the younger player. Three games ago Amone showed us what he can do with a 62, and although this is a tougher matchup can that Warriors clash he’s cheap enough to become relevant with anything 40+. This is pretty close to the Dragons best team, so the potential is there for an upset and for Amone and some of his less fancied teammates to make an oversized contribution. 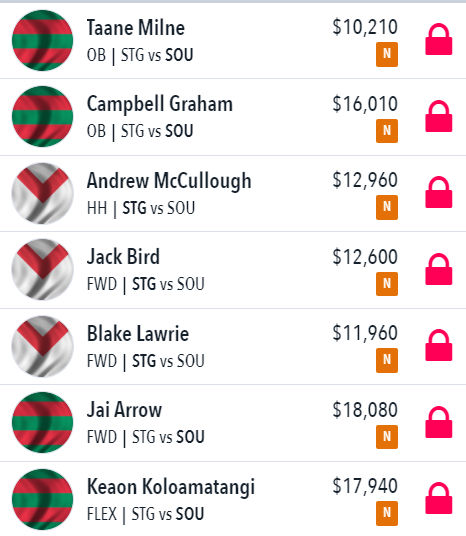