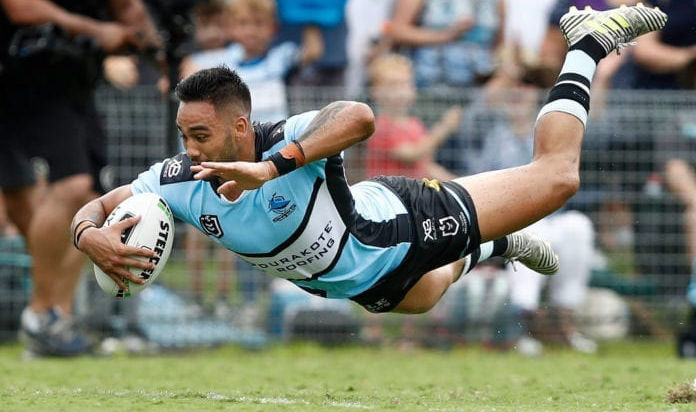 Round 15 in the NRL gives us a Super Saturday triple-header which may not have the blockbusters we crave, but certainly has some intriguing fantasy battles. First up at 3pm is the Cronulla Sharks (5th) hosting the Gold Coast Titans (16th) in Coffs Harbour. Then the New Zealand Warriors (14th) welcome the Penrith Panthers (1st) on the Sunshine Coast at 5:30pm. Finally the Parramatta Eels (6th) and the Sydney Roosters (9th) face off at Commbank Stadium in the game of the day at 7:35pm. The first two games look very lopsided but it’s the right time of the season to get the big sides while they have half an eye on representative games.

Draftstars have a $3,000 contest for the Saturday slate, with single game contests ranging between $6,000 and $8,000. There are also several other contests including the $2 Mini and 50c Micro to jump into.

No changes for the Sharks who found their groove after a slow start last week and are pretty close to full-strength right now.  Decision will need to be made about veterans like Wade Graham (starting again), and Dale Finucane (in the reserves). Lachie Miller is also in the reserves and would be a good chance to replace Will Kennedy at fullback at some point. Only one change for the Titans, with Alex Brimson returning at fullback, pushing Jamayne Isaako back tot he wing and Esan Marsters out of the team. Paul Turner was solid in his first game for the team last week, and Greg Marzhew was again incredibly destructive after regaining his spot in the team.

The Warriors have Addin Fonua-Blake (prop), Jesse Arthars (centre) and Ronald Volkman (five eight) as their ins this week. Rocco Berry, Euan Aitken and Ben Murdoch-Masila are out, with Chanel Haris-Tavita sliding back to a utility role on the bench. Volkman is a highly rated youngster that was poached from the Roosters. The Panthers have their usual continuity, with the only change being Isaah Yeo coming back in after getting a rest last week. That pushes Matt Eisenhuth straight out of the team. Not much to say about this team, with almost every player thriving in their roles.

The Eels are another strong team, but are reeling from a shock loss to the Bulldogs last week. Despite that, they’ve stuck solid with the only change being Nathan Brown out and Ky Rodwell replacing him on the bench. Maika Sio was solid, but a little tentative on his return from an ACL last week and might take a while to regain his explosiveness. Isaiah Papali’i has made a clear shift to a lock role with Niukore playing second-row, which hurts the formers minutes enough to matter in fantasy.

There are three changes for the Roosters. Billy Smith replaces Paul Momirovski at centre. Luke Keary is out with concussion, meaning Drew Hutchison moves to halfback and Sam Verrills comes in to share the hooking role. Finally a straight swap sees Egan Butcher replace Terrell May on the bench.

The first two games look so clear that it’s hard to argue against playing a heavy amount of Sharks and Panthers in your lineups. Of course the pricing reflects that and the NRL is never shy of an upset, so if either game can be kept close there could be some fantasy gold to be found among the underdogs. The last game looks like a genuine 50/50 and actually has a lot of underpriced players to choose from, so coming home strong with a game stack is also a great option.

The underrated Rooster has been battling away in a low-minute role all season as the secondary hooker, often limited to 30 minutes. With Keary out he gets back into his preferred halves role, where 80 minutes and a significant kicking role boost his fantasy prospects. In 20 games in this role for the Roosters he has averaged around 50 points, which makes him almost a lock at this price.

The Panthers gun is getting back to his best after an injury impacted start to the season. After some moderate form before Origin 1, he burst out of the blocks last week, putting 88 points on the Knights. Another gentle matchup has me projecting him for his usual 50+ points over the last couple of seasons, which makes this price far too generous. He’s young, he’s on the best team, he’s cheap, and he’s the best there is in his position...it doesn’t get much better than that.

Another Panther that hasn’t been at his best this season is Martin, so I’m hoping that Origin can do for him what it’s done for To’o. Martin has been fine this season, averaging a solid 40 points, but has now scored 7 straight scores in the 30s. That’s not very helpful in DFS, and has seen his price wander down towards the bottom of the board. With a nice matchup and surely due to put up another 60+ ceiling score that we’ve twice earlier this season, Martin is just one of many value forwards on this slate. If you think we get another underwhelming score from the Panther, all of Collins, Campbell-Gillard, Tupouniua, Murchie and McIntyre have similar scoring potential at cheap prices.

A Panther I’m less keen on is Fisher-Harris. As a kiwi representative he often benefits during the Origin period while his teammates are away or being rested. That has been the case again this year, averaging 59 over the last month. He’s closer to a 50 point scorer in the long run, and his ceiling is around the 65 mark. That is nowhere near enough at this price, and there are plenty of others at the top of the board that have much better scoring potential.

Sexton is a young half on a bad team who is being asked to learn the role while being belted most weeks. To his credit he’s rediscovered some form over the last 5 weeks and helped the team be more competitive, but it’s hard to consider him anything more than a 45-50 point scorer. He’s now plated 18 games in this role, with 5 60+ scores. While that is a decent strike rate, his absolute ceiling is around 70, which isn’t quite enough at this price. With a. Tough matchup and due for another quieter game, I think Sexton is a safe one to avoid this week.

I’ll quickly touch on the young half, who is unlikely to be relevant on debut. The Panthers matchup, being above minimum price, and being in a secondary role behind Shaun Johnson means the chances of a 40+ score are almost non-existent. It’ll be great to see what he’s got with the pressure off, bug I don’t think we should play him. The likes of Paul Turner and Matt Moylan would be interesting cheapies, but sharing the HH position with Hutchison means that their chances of being relevant are very low. We’re better looking for minimum price gems at the OB position if we want to be able to spend up in other spots. 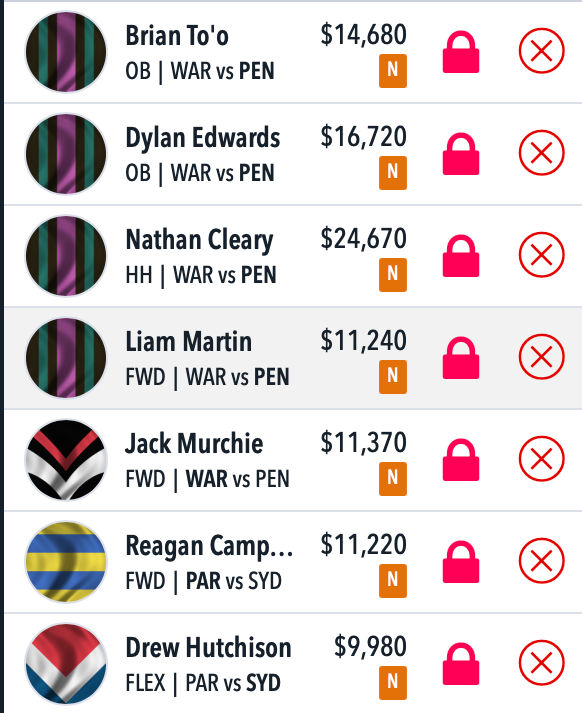