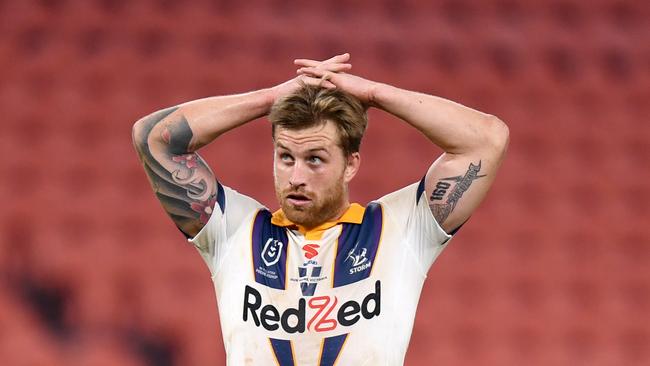 Super Saturday kicks off at 3:00pm with the South Sydney Rabbitohs heading to the Gold Coast to take on the Titans. With the Rabbitohs coming off the bye, they should be fresh and raring to go come Saturday afternoon in what could be a bloodbath.

Next up, the Melbourne Storm take on the Sydney Roosters at the SCG in the game of the round. The Storm will be looking to keep pace with the Panthers at the top of the table, with the Roosters desperately needing a win to stay inside the top 8. Should be a great game.

Finally, we head north once again to Suncorp Stadium, where the suddenly hot Canberra Raiders take on the Brisbane Broncos. Both sides have been in terrific form, and this could well eclipse the Roosters vs Storm clash for game of the round.

Draftstars has a $3,000 contest with $410 to first place. There are also several other contests including the Mini, Micro, and the High Roller on offer, as well as single-game contests for up to $8,000.

Once again plenty of changes at the Titans, starting with fullback Jayden Campbell, who is replaced by AJ Brimson, with Paul Turner set to make his club debut at five eighth. Greg Marzhew returns on the wing, with Corey Thompson out, whilst Esan Marsters is replaced by Patrick Herbert at centre. Isaac Liu switches from lock to prop, pushing Mo Fotuaika to the bench, with Origin Rep Tino Fa’asuamaleaui returning at lock.

Souths off the bye have a couple of changes, with prop Tevita Tatola returning to start, shifting Mark Nicholls to the bench, replacing Shaq Mitchell. Also added to the bench are Peter Mamouzelos as cover for Damien Cook, and Hame Sele. All Origin players are expected to back up.

For the Roosters, their Origin contingent of Tedesco, Collins and Tupou are expected to play, with Tedesco at fullback, shifting Joey Manu to centre. Tupou starts on the wing, where he replaces Billy Smith and Fletcher Baker reverts to the bench for the returning Lindsay Collins. No other changes expected.

Craig Bellamy hasn’t confirmed which Origin players will back up; however, Harry Grant has said he will play. Xavier Coates is out, with rookie Grant Anderson his replacement on the wing. Nelson Asofa-Solomona returns at prop, shifting Tui Kamikamica to the bench. Brandon Smith reverts to the bench with the return of Harry Grant, whilst Alec McDonald is added to the bench for Tyran Wishart.

The Broncos have a mixed bag regarding their Origin contingent, with Kotoni Staggs and Kurt Capewell unable to back up, however Payne Haas, Patrick Carrigan and Selwyn Cobbo will all play. Brenko Lee will replace Staggs at centre, whilst Adam Reynolds returns at halfback, shifting Ezra Mam to five eighth, whilst Tyson Gamble is out through injury. The final change sees TC Robati replacing Capewell in the backrow.

And finally, the Raiders will welcome both Jack Wighton and Josh Papali’i from Origin, with the former replacing Matt Frawley at five eighth, and the latter pushing Corey Horsburgh to the bench. Jordan Rapana (suspension) is out, with James Schiller his replacement. Finally, Corey Harawira-Naera returns on the bench, at the expense of Trey Mooney.

The alarm bells are well and truly ringing at the Titans, after giving up a huge lead to the Broncos two weeks ago, which was followed up by a pathetic display last week against a Cowboys side missing plenty of its stars. Their season appears to be disintegrating quickly, and without a turn around soon I can see coach Justin Holbrook coming under pressure in the second half of the season. The Rabbitohs should roll, and their deadly left side attack should feast against the porous Titans right edge.

Despite still missing their dynamic fullback Papenhuyzen, the Storm are on another level to the Roosters. They may not totally embarrass their opposition this week, but I would be surprised if the Storm don’t win comfortably here. If you’re looking at Roosters players, concentrate on their left edge, with the Storm’s right-side defence conceding 19 tries (59%) this season.

Finally, the Broncos should have too much for the Raiders at home. Yes, the Raiders have turned their season around nicely, however with the Broncos having that extra week of rest, added to getting their little general Adam Reynolds back, I believe the Broncos continue their push for a top 4 spot with a win here. Should be tight, but the fatigue factor should be enough to get the Broncos home.

Was Cody Walker’s performance two weeks ago against the Tigers the catalyst for him pushing forward into the second half of the season? I believe so, and that’s why I’m backing him in for another big game this week. The Titans right edge has been poor all season defensively, and Cody is ready to collect. Has destroyed the Titans in the past and I see him in for another big performance here.

Expensive, and coming up against a particularly good team, many may be thinking to look elsewhere for your premium purchase this week. But right now, there is no better player in the game. Buoyed by his Man of the Match performance in Origin game 1, Munster will be looking to put on another masterclass and push his side closer to the Panthers on the ladder.

Starting in the backrow and almost bottom dollar, Robati has started two games this season in the back row. On both occasions, he played the full 80 minutes, scoring 42 points and 41 points. If he can punch out something close to that, he’s worth the investment. Mind you, he scored those points without any attacking stats. If he can jag a try, he’s an unbelievable purchase at under $10k.

Minutes have dropped since his shoulder injury a month ago, seeing his scores and average dropping by the week. Added to this, he played nearly 60 minutes in a gruelling Origin match 3 days ago. You’d have to think Kevvie Walters will give the big man some rest in this one. At the price, prefer others who have more of a guarantee on big minutes.

This is a tough one, given Cook has been absolutely braining it for the past 3 weeks, and has been remarkably consistent all season. The problem I have is the fact Cook played 80 minutes in Origin 1, made 50+ tackles and played through the middle in an incredibly taxing game. There is also the issue of the Rabbitohs bench containing a backup hooker, indicating Cook could very well play limited minutes. With the chance of the Bunnies running the scoreboard up, an early shower is well on the cards here for Cookie.

Started the season like a man possessed, averaging 69 through 5 games, has only managed 1 score above 53 since, culminating in two sub-40 scores in his past two games. Given he is backing up from Origin, the chance, like Cook, is also high for an early spell for Grant. Can rack up a massive score in minimal time but take him at your own risk this week. 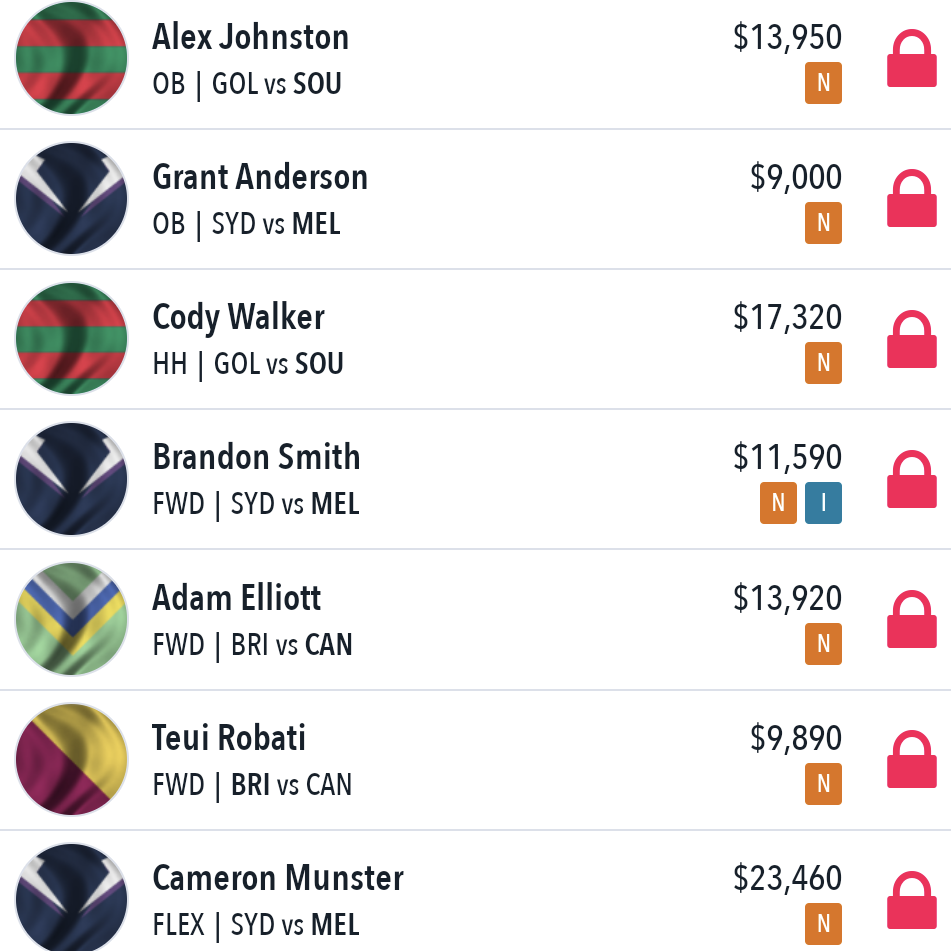