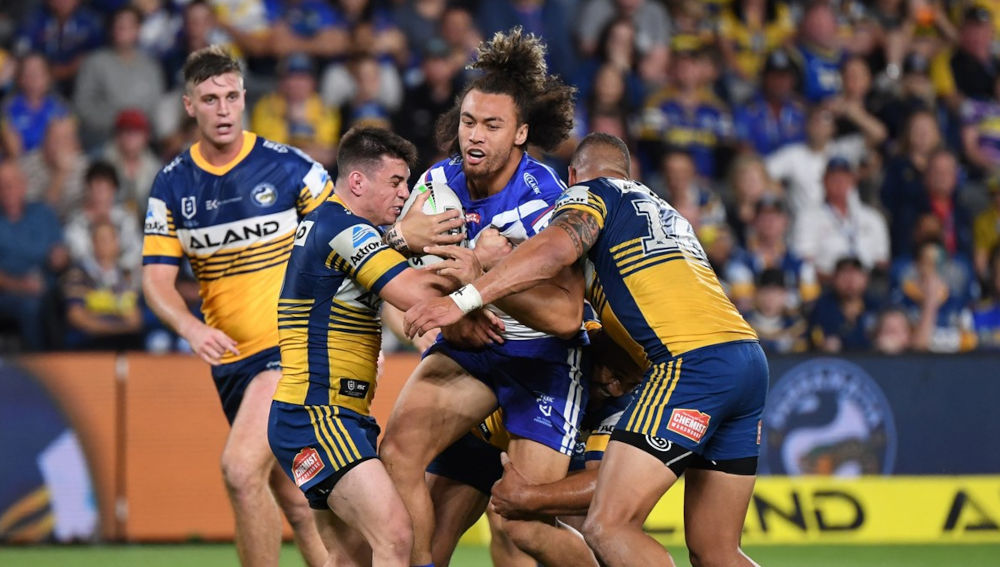 We get an extra day of footy in round 14, with the Queen’s Birthday long weekend set to showcase a bitter 80’s rivalry, when the Bulldogs host the Eels. Whilst these two sides have generally had tightly fought battles in the recent past, two comprehensive wins for the Eels in 2021 could be a sign of things to come. As the Eels once again flex their Premiership muscle in season 2022, the Bulldogs are on track for back-to-back wooden spoons. And despite an Eels win looking inevitable, the Bulldogs have some decent fantasy NRL players, so a good game to analyse.

Draftstars have put up a tidy $10,000 contest for the match with $970 to the winner. There are also several other contests including the $2 Mini and 50c Micro to jump into.

The Bulldogs have made no changes to the 17 that took the field in their last up loss to the Panthers, however, keep an eye on late mail for the possible return of Tevita Pangai Jr, who is looking to return after suffering from back spasms.

For the Eels, they welcome back powerhouse winger Maika Sivo from a torn ACL, with Waqa Blake shifting to the centre and Tom Opacic omitted. No other changes are expected for the Eels, with all 3 Origin participants (Matterson, Paulo and RCG) expected to play.

After struggling to score points under Trent Barrett for almost a year and a half, Interim Coach Mick Potter has the Bulldogs playing more heads up footy, and it’s showing in the number of points they’ve been putting on. After averaging 9.6 points per game during the first 10 rounds under Barrett, the Dogs have averaged 21.3 under Potter. It’s surely no coincidence, and on a sunny Monday afternoon I expect both teams to score plenty of points.

Looking to decipher where these points will be scored, and it appears obvious that both sides will be headed left in attack. Given this, left edge attack players are where our bread should be buttered this week when looking for attacking stats, however both sides have several players who just seem to pump out big scores on a weekly basis. Players like Isaiah Papali’i and Ryan Matterson for the Eels, and Josh Jackson, Max King and Jeremy Marshall-King for the Bulldogs seem to consistently punch out 50+ each and every week.

There is an abundance of good choices then, so let’s dive in and try and find the best of the lot.

One of the form forwards in the competition, Matterson was rewarded with his first Blues jersey, and he didn’t let anyone down. Has been remarkably consistent with base stats, whilst also consistently managing attacking stats. Averaging over 75 in the past 3 weeks, he hasn’t scored below 50 for 6 weeks. Fills up the stat sheet and should have another big game here.

Has been one of the biggest beneficiaries of the change in Head Coach, Burton has been terrific the last 3 weeks, culminating in a superb display last week against his former team the Panthers. Like Matterson, has zero scores under 50 for 6 weeks and with his booming boot you can always guarantee ample points in kick metres. It’s a toss of the coin between Burton and Dylan Brown this week, however I’ve got to take a Bulldog in here somewhere.

Slightly risky given it’s his first week back in the top grade after a torn ACL, at bottom dollar Sivo will likely be in almost every squad. Will get several chances on the left wing against a poor Bulldogs right side defence, Sivo has also historically been a worker, carrying the ball for his team and making big metres. Could have been listed as a ‘Who Knows’, but at this price I love the upside.

A really tough ‘Hate It’ column this week, as I suspect there will be points aplenty in this game, however RCG hasn’t managed a score above 50 since round 3 and after coming off Origin, could be in for a small reduction in minutes. With so many good purchases this week in the upper middle price range, these mid-price guys just won’t cut it this week.

King has been playing some great football since moving into the starting 13, so this is more a speculative play on the possibility of Tevita Pangai Jr coming back into the team and taking some of King’s minutes. If this happens, King likely goes back to punching out the mid to high 30s we were used to seeing from him over the first 10 rounds, rather than the 50’s he’s been managing without Pangai around.

Up and down like a yo-yo this year, who knows what sort of score ‘King Gutho’ will produce. Is due an up week, given over the past 8 rounds he has literally gone up and down in his scoring, my money would be on Gutherson scoring 50+ here, as he and the Eels traditionally beat up on lesser teams and have been known as ‘flat track bullies’. Could be worth a shake at the price, but he’s just as likely to score 10 as he is 60. 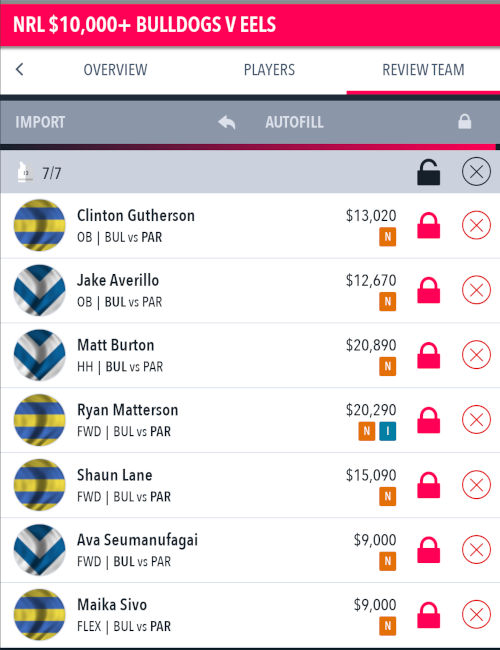