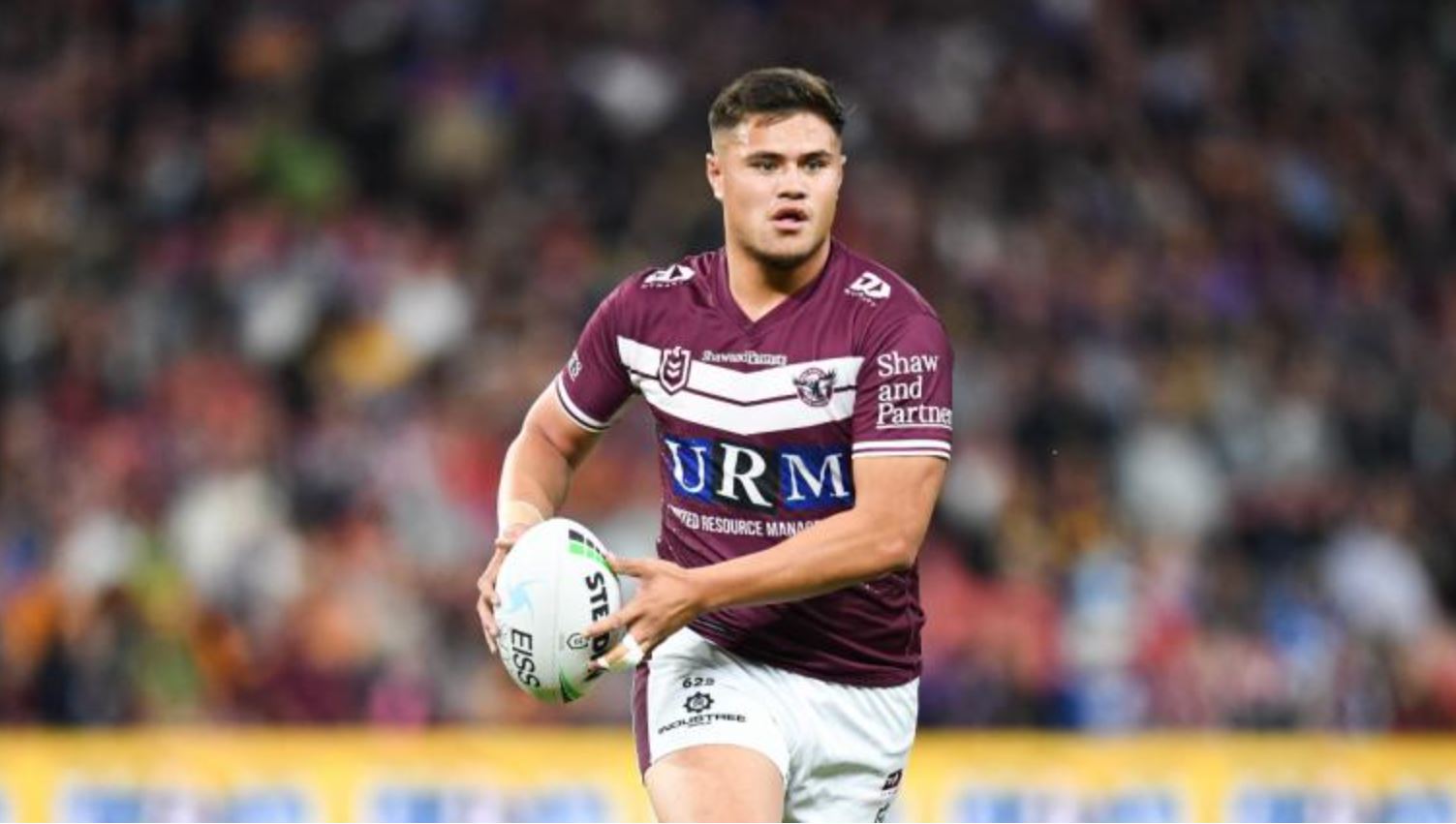 It’s a double-header with plenty of intrigue to get us into the weekend section of Round 11. Firstly the Wests Tigers (15th) host the Canterbury Bulldogs (16th) at Leichhardt Oval, with both teams vying for the wooden spoon. The Bulldogs took a big lead in that race by being the first team to sack their coach this week, and generally looking a shambles. Then at 7:55pm it’s the Parramatta Eels (6th) welcoming the Manly Sea Eagles (9th) to CommBank Stadium, with both teams having taken problematic losses in Magic Round and needing to get their top 4 aspirations back on track.

Draftstars has a $5000 contest with $679 to first place. The single game contests are set at $10,000 and $12,000 respectively. There are also several other contests including the Mini, Micro, and the High Roller.

There are four changes for the Tigers. The headlines see Luke Brooks and Jake Simpkin drop out after injuries, with Jock Madden coming into the halves and Jacob Liddle to hooker. Asu Kepaoa is named to replace Junior Pauga at centre, although it’s likely that new recruit Brent Naden will come straight into that spot to face his old team after switching during the week. Finally, Alex Seyfarth drops off the bench with Nu Brown coming in to act as a backup to Liddle. There is also a reshuffle with Luke Garner reverting to the second row and Kelma Tuilagi back to the bench. Tyrone Peachey remains at centre, where we’ll hope to see a better performance than he put up last week.

The Bulldogs have swung four changes also. Jake Averillo comes back into the centres to replace Naden. Josh Addo-Carr is out with illness, replaced on the wing by young Jacob Kiraz, who looked okay on debut a month ago. Corey Waddell also misses with injury, with Josh Jackson moving to the second row, Max King starting at lock, and Ray Fatal-Mariner joining the bench for his first game of the season. Bailey Biondo-Odo is replaced as utility by a similar player in Zach Dockar-Clay.

Just one change for the Eels. Bryce Cartwright drops off the bench, replaced by Marata Niukore. They’ve also named Ryan Matterson to start at lock and Nathan Brown to drop back to the bench in a switcheroo which could be reversed before kickoff.

The Eagles lose young Ben Trbojevic to injury, with Morgan Harper named in his place at centre. Ethan Bullemor is also out, with Andrew Davey moving into the starting team at second row and Josh Schuster joining the bench. I’d be surprised if they don’t change places pre-game. I’m still expecting a breakout from Tolu Koula any game now.

Both games are pretty straight forward in terms of expectations. The Tigers have showed more form than the Bulldogs this season (narrowly), and are in a stronger position for this game with availability and stability. Chuck in the home ground advantage at their spiritual home ground and I’m surprised they’re not bigger favourites. Still, two bad teams means it could be an open affair and I’d be happy to play a few Bulldogs players if you like them. For the second game it’s hard to put much expectation on the Eagles with their indifferent season, but they still have Turbo and Cherry-Evans leading the charge and the inclusion of Josh Schuster would be very handy if he can handle a full game. The ability of Tommy Turbo to get back into some form is obviously the key to their season, and he hasn’t looked fully fit at all so the odds are probably fair.

Opinions on Garner differ wildly as a real-life footballer, but there is no arguing that he is a good fantasy player when given the opportunity. A move from centre to second row sees his projection jump by around 10 points for this game, with this price clearly big value. A soft matchup is helpful of course, as is the presence of a bench utility which generally means both second rowers are guaranteed big minutes. It feels like his penchant for the odd injury is the only reason to hold back at all on Garner tonight.

After a shocking first 5 weeks where he averaged 39, Mahoney has bounced back by averaging 57 in his last 5. That’s pretty much the level we expected from him last season, and again this week he doesn’t have anyone on the bench that can threaten his 80 minute chances. A tougher opponent isn’t a hindrance for a player that can score plenty of points both in attack and defence. He’s a regular try scorer for a hooker, and we saw an 80-100 ceiling a few times last year that we’ve yet to see in 2022. The price is a tad too low anyway, but the big ceiling makes it an extra nice play.

Brown didn’t quiet pay off when I recommended him last week, thanks to an upset loss to the Roosters limiting his attacking opportunities. He still managed to grind his way to 48 points on the back of his strong base stats and growing involvement. That’s what makes him such a nice play in 2022, he does a bit of everything and has the attacking class to rack up huge numbers if the Eels get on top. He’s available as an OB again which is a throwback to his 2 games at centre a few weeks ago, and is also the reason his price is a little lower than we could expect for a player with a similar projection to Mahoney. The two Eels look great, and their captain Clint Gutherson is a very viable alternative if you need extra salary relief for other spots.

There’s plenty of high price forwards I could pick on here, but it has to be a Bulldog after the week they’ve had, and I’m sick of beating up Josh Jackson this season. Vaughan is on the wrong side of 30, and despite some promising signs with three straight 50+ weeks 3 weeks ago, it seems clear that his ceiling is not what it used to be. Add to that the suggestions that he is one of the players the Bulldogs are looking to move on from, and I can’t see how he beats some of the excellent value forwards on offer on this slate.

Hastings is flying at the moment, and he’s learnt this price tag with a 5 week run averaging 64 since getting over his groin injury. The switch from Luke Brooks to Jock Madden is unlikely to have too much impact on him, with Brooks playing a similar role. This fade is based more on the premise that it’s hard to pay this much for a journeyman Tigers halfback when Daly Cherry-Evans is just above him and Mitch Moses is significantly cheaper. As good as he’s going, they’re both going better and have a long history of doing so. I expect him to be good against the Bulldogs and viable on the single-game slate, but I don’t think you can play him over the two aforementioned superstars.

As I said above, Manly’s fortunes have a lot to do with these two getting fit and getting back to their best form. Both are too cheap for their best level, but just how close tot hat can they get tonight? I’d say Schuster is the better play if he does indeed start, as he’s younger and has less of an injury history than Turbo. He still might need a game or two to get close to 100%, but he’s so cheap that it’s still worth considering. Turbo on the other hand looks nowhere near the dominant force he was last year, and 3 50-odds in 6 games isn’t enough to make us eager to play him here. However, I think that everyone else will have that mindset too, and it could be a chance to play a cheap and low owned stud if you think he can come out and have a bigger impact in this game. Tough call! 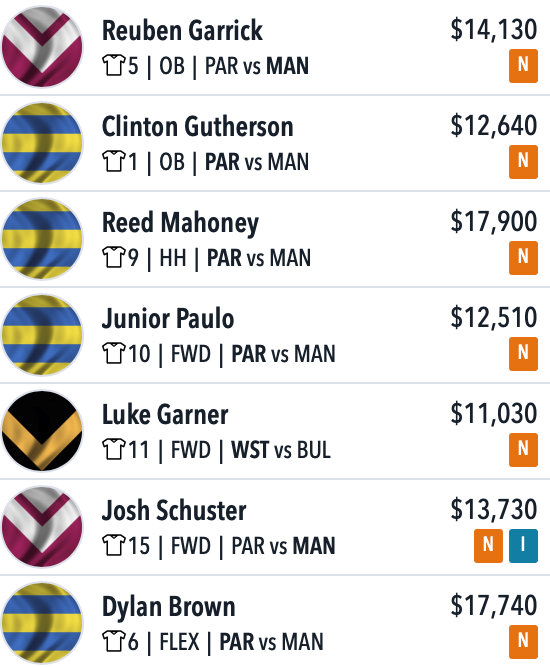