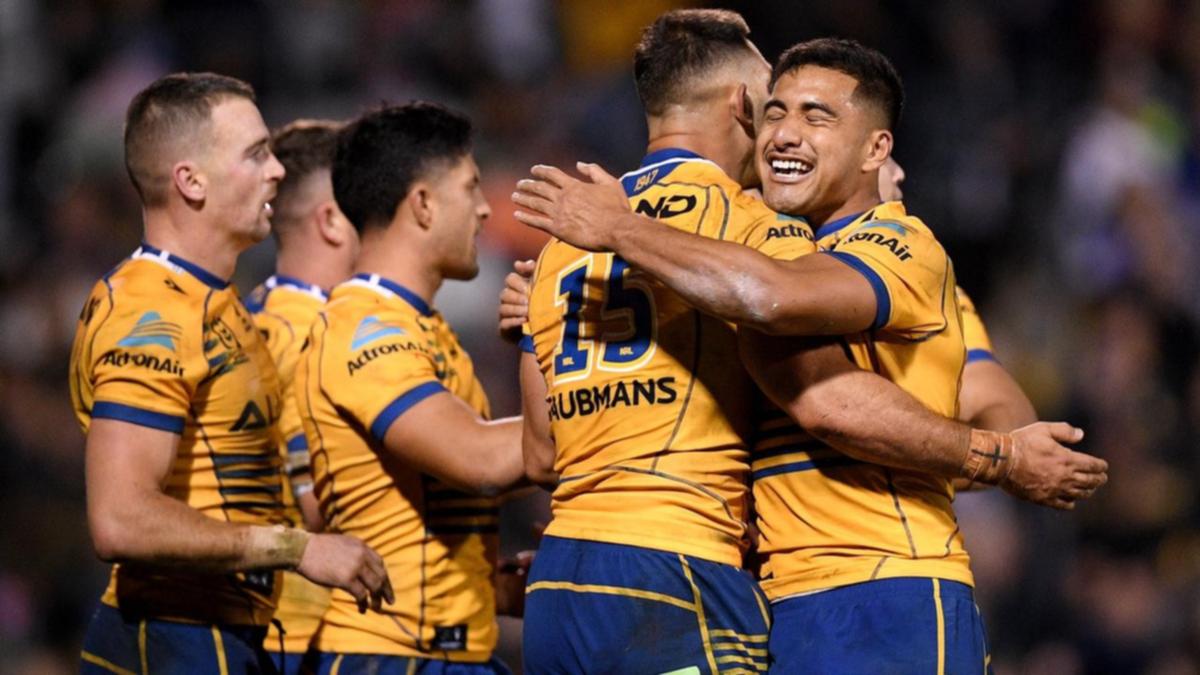 Perhaps the best part of Magic Round is the Sunday triple header, with the action kicking off at 1:50pm between the Cronulla Sharks (4th) and the Canberra Raiders (12th), with both teams coming off bruising wins. Then at 4:05pm the Sydney Roosters (6th) and the Parramatta Eels (5th) go head to head, again both off wins in perhaps their best performances of the season so far. Finally at 6:25pm the Wests Tigers (13th) and the North Queensland Cowboys (3rd) end the round with another intriguing matchup between two sides who’ve been punching above their weight in recent times.

The Sharks win last week was so impressive because they lost both Will Kennedy and Jesse Ramien during the game, with those actions resulting in suspensions. They’re replaced by the retiring Ronaldo Mulitalo on the wing, with Connor Tracey moving to centre. Nicho Hynes moves to fullback, with Braydon Trindall coming in at halfback. That dynamic will be interesting. Royce Hunt is back on the bench in place of Andrew Fifita, but they could switch pre-game like they did last week.

Only one change for the Raiders, with the injured Jarrod Croker replaced by Sebastian Kris being promoted to the centres, and Xavier Savage moving into the bench utility spot. Matt Frawley steered the ship around in the absence of Jack Wighton last week, and is likely to do so again.

The Roosters get Connor Watson back from injury, just in time to replace Sam Merrill’s at hooker after his own injury. The other change is Dan Suluka-Fifita coming in for Lindsay Collins, with Sio Sea Taukeiaho promoted to start at prop. The halves combo of Keary and Walker really started to click last week.

No changes at all for the Eels, who are riding high after beating the Panthers and look to have one of the stronger forward packs and spines in the competition. The outside backs look a bit thin with numerous injuries, but it doesn’t matter if the core of your team is dominating in the middle of the field.

The Tigers regain Luciano Leilua, with Alex Seyfarth sliding back onto the bench and Thomas Mikaele dropping out of the side. Jackson Hastings is thriving at halfback, and I’m patiently waiting for Jake Simpkin to show us how good he can be.

Finally, the Cowboys are unchanged. Another convincing win has them firming as a genuine finals team, and with the youngest 17 named to play of the 6 teams today by a big margin, who knows how much upside there is. What a genuine surprise packet with lots of interesting fantasy options.

It’s hard to argue with the Sharks as big favourites, especially with Wighton still out. It’ll be interesting to see how much the role changes for Nicho Hynes as the fullback, but I expect he’ll still be very involved. The odds also look very fair in the second game, with the Roosters fielding a strong 17 but still carrying question marks over the form of some key players (despite a good week).

It’s the final game that has my attention, with the Tigers a much-improved side over the last month and the Cowboys aforementioned youth lending itself to concerns over consistency. They haven’t faltered yet, but I think those odds are a little too generous for the way these two sides line up. Finishing off a line-up with a couple of Tigers could pay dividends as a sneaky mini-stack.

Last week I was unsure of the Raiders halves dynamic, thinking young Brad Schneider might take on more of the kicking workload. As it turned out Frawley kicked for almost 400m, and Schneider even lost the goal kicking to Jarrod Croker (with Croker out he’ll get it back). If we take Frawley’s career average in the halves of 37, but add 11 points for the extra kick metres (usually averages 185), we can see he is ridiculously cheap. A try helped his 53-point outing last week, but the ~40 he would have gotten without it is more than enough at this price.

This is an interesting play because the move back to the bench this week looks to be a significant demotion, but isn’t (probably). Last week Butcher played 80 minutes in the second row, where he averages high 40s (and scored 58). Back on the bench he had averaged 23 in the 3 games prior, but generally averages in the high 30s. I think a score of 40 is a reasonable bet this week, because he’s the only big minute player on a bench consisting of Baker, Suluka-Fifita and Hutchison. With all 5 starting forwards capable on injury or restricted minutes on any given day, I expected 45-50 minutes for Butcher as a worst case scenario, with lots more upside. And there’s always the chance that he ends up starting anyway, in which case lock him in.

Brown returned to the halves last week after a couple of games at centre, and again showed that he’s breaking out this season after an already stellar young career. He played a big part in beating the Panthers, and the Roosters are going to have their hands full with him this week. The price is a bit too soft for a guy averaging 60 at the position this season, and the 80+ upside is very real. Being available as an OB is a bonus on this slate as you can choose him and Frawley and still play one of the many other interesting options at HH.

Last week’s score of 8 can obviously be ignored after playing low minutes off the bench, but I’m pretty sure the young backrower is playing a bit banged up at the moment (it’s one of the reasons I’m so keen on Butcher). Even at his best Tupouniua averages around 44, which doesn’t cut it at this price. In comparison Angus Crichton is $300 more expensive and averages in the 55-60 range when at full power. There’s a lot of good plays in that price range, so avoid the possibly injured Rooster in a tough matchup against the Eels.

I’m not sure what to think of Nicho’s scoring potential in this game, but there are enough doubts for me steer clear at this massive price tag. The move to fullback might not change his play too much in attack, but it will certainly detract from the 20 tackles he has been making per game this season (he averages 6 at the position). His kick metres are also likely to drop at least a little with Trindall a capable boot in the halves. Ownership may still be high enough given the score of 116 last week and an average of 75 this season, so I’d rather take a shot at Frawley or even Trindall in the HH position.

The young Tigers hooker has been wildly inconsistent since debuting last season, with injury a factor in that. Last week’s 40 points was his 4th 40+ effort in 13 games, which looks better when you consider some of those games were as bench utility. He’s 4/9 as a starter, which makes him look way too cheap. With no real backup on the bench, there is a chance he repeats last week’s 80 minutes and shows us even more upside than we’ve seen so far. The talent is there, I think it’s a risk worth taking to bet on it exploding into a fruitful fantasy score this week. 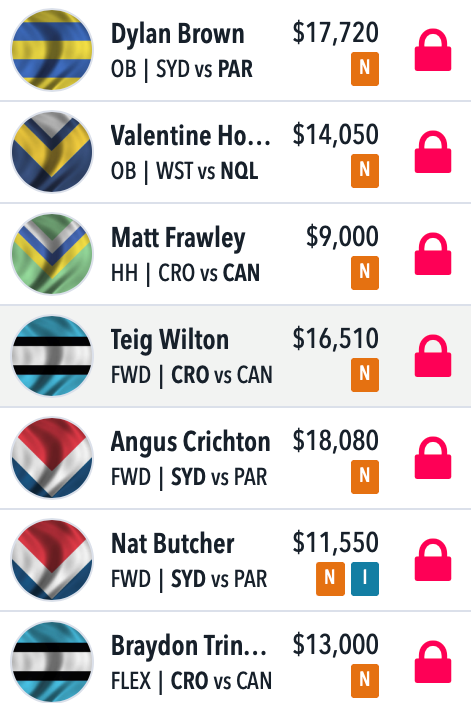