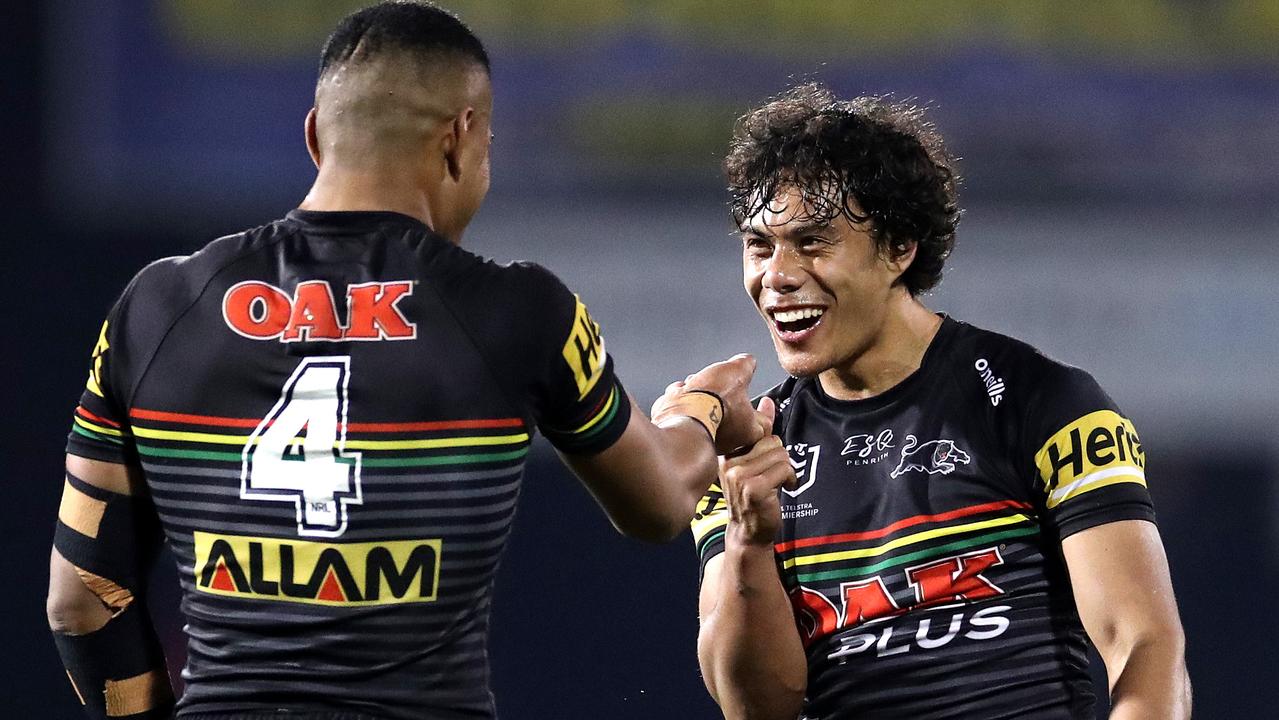 With Sydney teetering on the edge of Covid-19 restrictions and testing, for now Round 9 Friday will play out as scheduled. With three teams in the top four and a side one win away from the top 8, it should be a great night of Friday NRL Double-Header action. The Undefeated Panthers (8-0) host the Sharks (3-5) in Penrith and the late game at Bankwest for the Eels (7-1) and the Roosters (6-2)

On Draftstars, a $12,000 contest for the Eels and the Roosters is the highlight on Friday night, along with a $10,000 pool for the Panthers and the Sharks to kick off Friday. We also have a 2-game contest for $3,000 which you can use the “Player Swap” feature on Draftstars. There are also High Roller and Micro contests available for the late game.

Sydney - Very high (90%) chance of showers, most likely in the morning and afternoon. Explains the low totals for both games.

The Panthers have one change with Spencer Leniu out of the side and Scott Sorensen joining the bench. Kurt Capewell on track to play after a rib issue last round.

For the Sharks, Jesse Raimen returns after a glute injury in training last week. Teig Wilton goes back to the bench. Braden Hamlin-Uele is out for the Sharks with a high ankle sprain.

The Eels looked like they would lose Nathan Brown to a nasty hip injury but somehow is on track to play. Junior Paulo was switched to the bench last week but has been named to start.

For the Roosters, their rotten injury luck continues. Brett Morris and Lindsay Collins out for the season with ACL injuries. However James Tedesco is back after concussion pushing Joey Manu back into the centres. Matt Ikuvalu is back on Morris’ wing. Ben Marschke has been named at Hooker due to the eye injury from Sam Verills. Nat Butcher starts at 2RF due to Siliti Tupouniua’s suspension.

Going to mix things up this week and focus on the plays from both games if you were going to enter the single contests. Obviously the Panthers are red hot favourites at home and the Eels should be too good for an injury ravaged Roosters side.

For the Panthers the rise in salary for Brian To’o is justified. Soft matchup and a 61FP average from his last 6 matches, load him up on that left edge. If you are salary saving then Dylan Edwards could go massive at $11k. Third up after an injury spell and at home means he could match or beat To’o’s score. Sharks options are hard to love but Connor Tracey at $7,600 is not the worst.

The return of James Tedesco at $15,010 is a welcome boost for the Roosters and you may get him at a lower ownership after his injury affected scores. Everyone will swarm to Clint Gutherson after his mega 88FP with 2 tries against the Bulldogs. I do expect a more floor score this time round but at $11,470 he is fine in this spot. I don’t expect Maika Sivo’s hot form to continue against this defence and he is my fade. Watch him steamroll Tedesco again after writing that…

Jesse Raimen has claims to be the best player on this Sharks team. The ability to break tackles at huge rates (x2 10TB efforts) is fantasy gold. While the matchup is tough and the salary is above $10k, it could be the edge you need in this position. Draftstars can’t split Stephen Crichton and Matt Burton here. However if you are playing Nathan Cleary then add Crichton. If you choose Jarome Luai then pair with Matt Burton for correlation.

Tom Opacic is thriving on that Eels left edge, scoring north of 40FP in this last three games including 46 last week. Looks a safe play at $9,160. With all options at the $9k mark, this looks to be an even spread of ownership. However with Joey Manu dropping back into the Centres, I would ignore his last two fantasy performances.

A low tackle count from Nathan Cleary saw his fantasy point total “dip” to 64 points against the Sea Eagles. But Cleary is just about matchup proof and there are enough cheap options to get him in. Sharks options in Shaun Johnson and Chad Townsend are fine but the matchup is horrendous. A season low meters run by Jarome Luai saw a season low fantasy score of 34 last week. This has kept his salary manageable and is a good pivot off Johnson.

So Draftstars have caught the Sam Walker hype but left Drew Hutchinson behind in terms of salary. Clearly Walker has the ceiling after a huge 88FP against the Knights but a tough matchup against Mitch Moses and Dylan Brown awaits. I still believe he is a great value play. But more value lies in Hutchinson who at under $10k could make a lot of lineups.

For four weeks now, we are awaiting another Viliame Kikau explosion but that has not occured. His minutes are trending in the wrong direction, especially after a season low 48 minutes last week. Tread carefully there. Kurt Capewell does come into this match with sore ribs so the Panthers may limit his minutes as well. Isaiah Yeo’s price is creeping down as well and is more than worthy if you can fit him in. The Sharks back three in Briton Nikora, Toby Rudolf and Wade Graham were very good against the Storm and you may get them at very low ownership against the likes of the cheaper Kikau and Capewell.

Nat Butcher who comes in for Tupouniua represents great value for the Roosters. Likely to play the full 80 on the edge with two backs on the bench. Thus you can also look at Victor Radley who should play increased minutes. For the Eels the price on Isaiah Papali’i is now an extraordinary $15K but he has simply been the best player in this Eels forward pack. Scored 80+ in 3 out of his last four games. Can it continue? Surely not but he is a slate breaker. Not much value in this spot so save some money for this position.

Apisai Koroisau is second up after a long injury absence and will be the lower owned of the two options. Tough to get that extra $3,000 where you can rely on Blayke Brailey’s big minutes and likely big tackle count.

The Roosters can’t take a trick in the dummy-half role with Ben Marschke back for the start. Likely to play less than 80 minutes and have Adam Kerigan to provide a 20 minute chop out. So eggs in the Reed Mahoney basket.

Surprisingly shallow pool for the Sharks/Panthers match with only 5 starters and 1 bench option available in this position. Very fairly priced but expect a ton of ownership on Moses Leota and Matthew Eisenhuth. No real leans here.

Don’t mind the bench options from either side in this spot. Jared Waerea-Hargreaves and Oregon Kaufusi represent some cheap value, especially if they can get extended run. 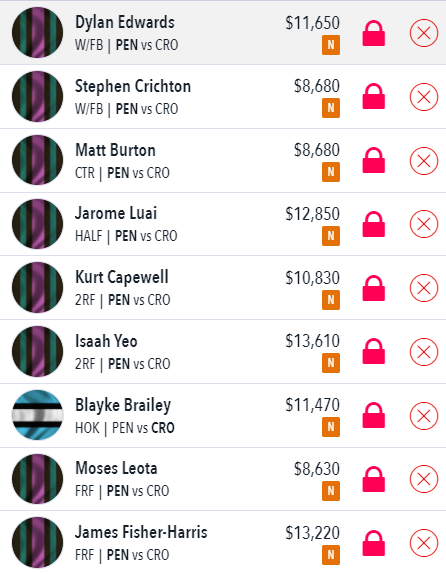 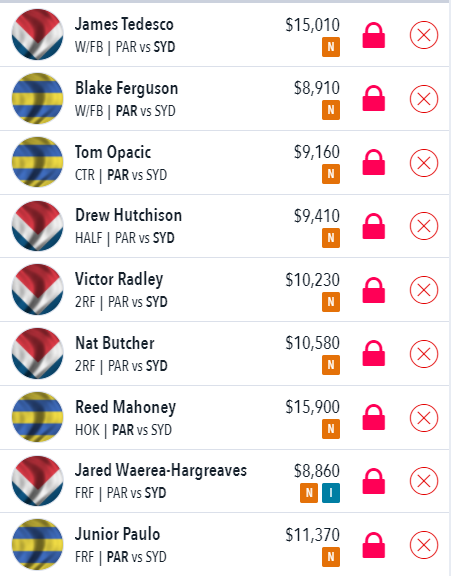