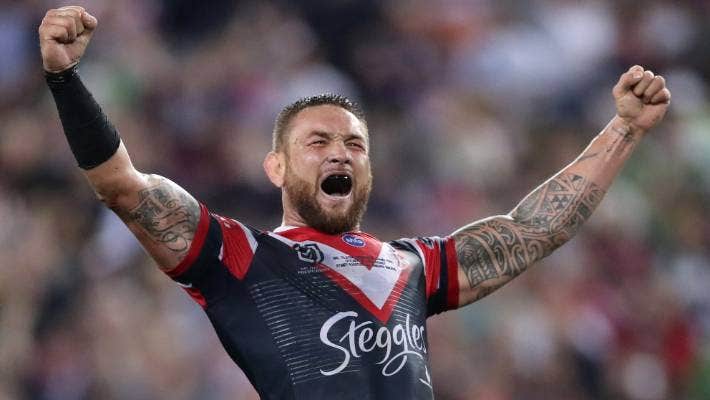 It’s Round 20, which means things are getting very serious for any teams still in the finals hunt. 6 more games to secure a good position and get cherry ripe for the games that matter. We kick things off with a bit of a blockbuster, the 5th placed Roosters facing the 4th placed Eels in neutral Mackay. Both teams have managed to keep things on track through the Origin period, with the Roosters winning their last 3, and the Eels 4 from 6. Mackay should turn on it’s best weather for the occasion.

Draftstars has a $20,000 contest with $2,184 to first place. There are also several other contests including the Mini, Micro, and the High Roller. Plus, your last chance to qualify for the Draftstars Live Final.

The Roosters lost both Matt Ikuvalu and Billy Smith to serious injuries last week, stretching their injury-ravaged backline to breaking point. Luckily, they’re able to bring Josh Morris in after a rest last week, as well as bringing Adam Keighran in at centre after playing a utility role for most of the season. The only other change is Sio Sua Taukeiaho returning on the bench, meaning Fletcher Baker drops out of the team.

The Eels have recalled Tom Opacic in place of last weeks debutant Will Penisini. Marata Niukore drops off the bench, with Bryce Cartwright named to take his spot.

The Eels are favourites for a reason, with the Roosters having lost 5 starters since the start of the season, as well as a few of their backups. The Eels are only without Mitch Moses from their best lineup. Despite that, the Roosters are still one of the best coached teams in the NRL, and feature plenty of quality players. Without Moses I have this game pretty close to a coin flip, so don’t be afraid to sprinkle in some Roosters backs wherever they fit.

The Roosters halves were already too cheap in recent weeks, but they’ve gotten even cheaper! Both are mid 40s scorers on average, but Hutchison is probably the better cash play, while Walker is more volatile and perfect for a GPP. The tough matchup shouldn’t be a problem at these prices.

Another volatile Rooster, JWH has averaged 47 points per game since Lindsay Collins went down in week 10. He went from mostly playing from the bench, to often playing 60+ minutes. As a result, we’ve seen 3 60+ ceiling games. He’s gotten cheaper after a down game last week and could be a little lower owned than Eels options Paulo and RCG right below him.

I think I’m right in suggesting that the rampaging Eels backrower will get plenty of opportunity to target Sam Walker in defence. You won’t see many bigger mismatches than that, so as the highest projected player on the slate (and top fantasy players of the season), he’s in a great spot to put up a massive score. Throw in a price reduction after a couple of quieter weeks, and it looks like a very nice play indeed.

Manu has scored 50+ in 6 of his last 8 games, and 60+ in the last three. That’s incredible for a back, but he has been playing fullback and five-eight in most of those games. This week he’s named on the wing. His price has stayed reasonable thanks to being named at centre every week before switching for the game. He’s due for a quieter game, so I prefer some of the massive ceilings around him at WFB, or the value plays below him at CTR. The incredible form should be enough to keep his ownership up a bit.

There’s no reason Radley can’t have a good game, but the odds of him backing up his two best scores of the year with another ceiling score are not great. At the hooker position in particular, Mahoney has a bigger ceiling, and Verrills and Keighran present much better value.

What we’ve seen of Keighran over the last few years has revealed a decent footballer, but he falls victim to his utility value and can never nail down a role. This week he’s filling in at centre with the Roosters injury crisis. He played centre 3 times at the Warriors in 2020, with two terrible scores and a 60+ which included a hat trick. That shows a ceiling, but doesn’t tell us much more in such a small sample size. With the CTR/HOK eligibility and as the Roosters likely goal kicker, Keighran is a very interesting pick who is worth some exposure in GPPs. 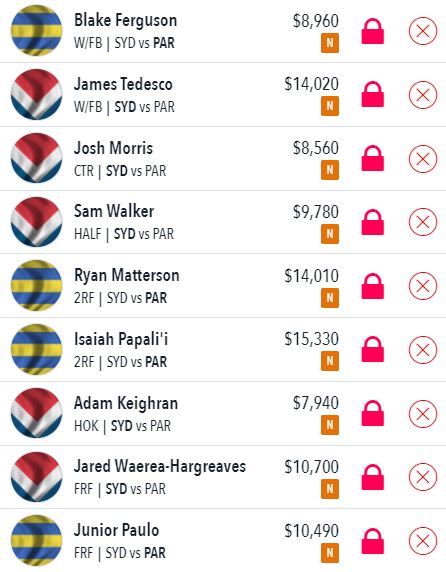