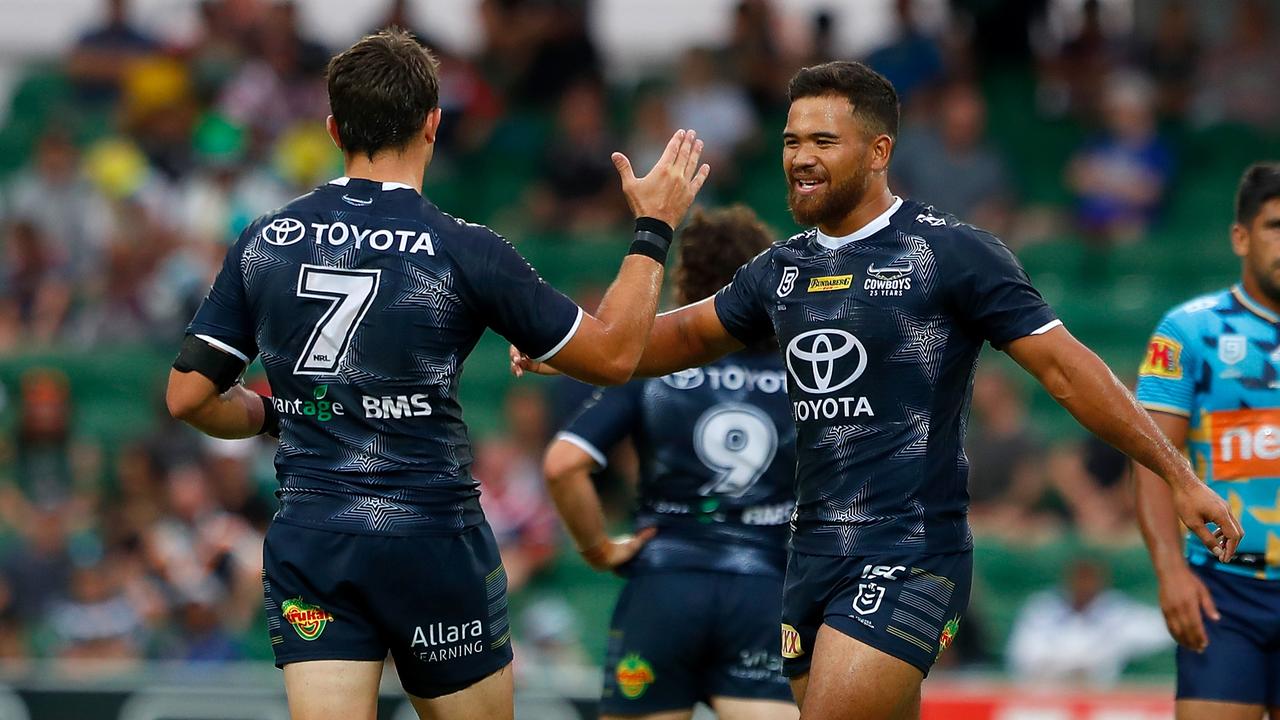 Super Saturday is being changed to Sloppy Saturday for one week only. Not only do we have a pretty uninspiring slate of games, but the rain is going to be bucketing down for each game. Still, I’ll be in position for the 7 hour sweat, with the AFL up on the split screen as well. Both early games feature competition heavyweights against teams that were soundly beaten last week. I can’t see the Panthers or Rabbitohs having any trouble this week either. The late game is a more open affair. The Cowboys host the Dragons, with both teams losing pretty poorly last week, but not looking totally awful on paper.

The main slate on Draftstars today is down to $5,000 with a top prize of $679. I think we can get it bigger than that. The single game slates are also available with some nice prizes, especially the $10,000 pool for the late game.

Only a few changes to the team lists. The big one is the loss of Jason Taumololo with a fractured hand. This provides opportunity for other Cowboys forwards but grim news if you are a Cowboys fan. Jeremy Marshall-King is back on the bench for the Dogs, which probably rules out any chance of him or Sione Katoa being viable plays. Manly and Souths have both made early changes in the 2nd Row, with Curtis Sironen ruled out and Jack Gosiewski promoted back to the field along with Andrew Davey. Jacob Host has been dropped altogether for Keaon Koloamatangi. Those both appear to be upgrades in talent, and will be popular fantasy plays, but are unlikely to make much difference to the outcome. Corey Norman comes back into the Dragons team from his suspension, replacing Adam Clune. That can only help their cause in attack.

Panthers and Rabbitohs stacks will be popular, and it does seem to be the prudent play. Finding a couple of nice value pieces to make it affordable will be the tricky part. In particular I’ll be looking for a couple of cheaper options in the late game who could bring my lineups home strong. I’m expecting the Dragons to give the Cowboys a real run for their money, so that might be where the opportunity lies for unique value plays. Both teams are a little hard to read with new coaches, players changing positions, and weird things like Taumololo being punished for lazy defending.

If the Panthers can get off to a fast start, this game has cricket score potential. Momirovski looked solid last week. Scored a nice 37 despite being denied a try and also missing out on some assist points when Charlie Staines was bundled into touch a couple of times. The Knights didn’t test the new defensive combo (Meaney, Cotric, Aveillo, Elliot) on that side of the field very much last week, but I fully expect the Panthers to give them a thorough examination on both edges.

The clear value play on the slate appears to be Davey, who gets the starting role that he excelled in last year. It was only a small 2 game sample, but he put up 50+ scores in both, and appears to have a great combo of busy defense and an ability to break tackles. He may not get 80 minutes with Gosiewski on the bench, but 40+ is still a likely score.

Bear with me on this one. Marsters put up a lowly 12 last week, when he was the victim of Brian To’o running rings around defenders on his side of the field. His career average at centre is 37, and he now gets to play at home as favourites, rather than against the competition favourites away. Throw in the little bonus of running at Jack Bird who is still a little rusty after missing 2 seasons with ACL injuries, and I’m feeling confident that Marsters can pay off his minimum price tag.

He put up the 2nd best score (55) of all available 2RFs last week, but that was thanks to an extremely rare try. Elliot is far too expensive for low 40s type scores we can expect, especially coming up against the Panthers. He could still put up a reasonable score in tackles alone, but it won’t be enough to get anywhere near a ceiling score. Josh Jackson might be the only Bulldogs forward of some interest, as he’s a little cheaper and can tackle all day in the middle of the field.

I named him here last week, and now I have to do it again. Okay, he was only 7% owned on the main slate, but it should be zero. I must reiterate that Drinkwater’s scores at fullback at terrible, don’t touch him until he moves back to the halves.

Who Knows - The HOK position.

Again, similar to last week’s slate, I’m using this section to remain an entire position of ugliness. It’s not quite as bad as last week (The answer did indeed turn out to Reece Robson, with two hookers on the bench), but it’s not great. My interest is confined to Cook, Hunt and Robson. Cook needs to be much better than last week to justify his price tag. Hunt is also very expensive and will have a hard time repeating last weeks big score. Robson has the same issue of Granville on the bench, but he did get 60 minutes last week and is a good enough player to score well in that time. Robson or Cook. 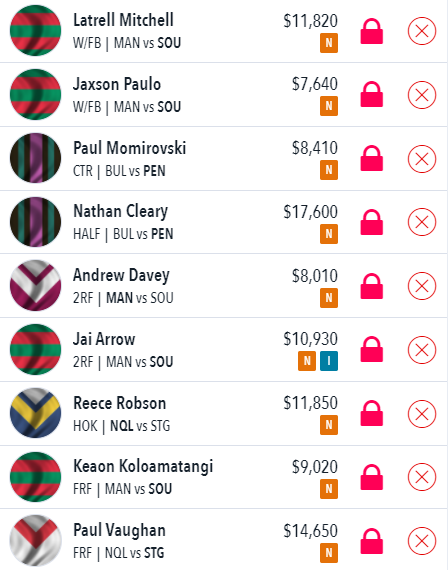