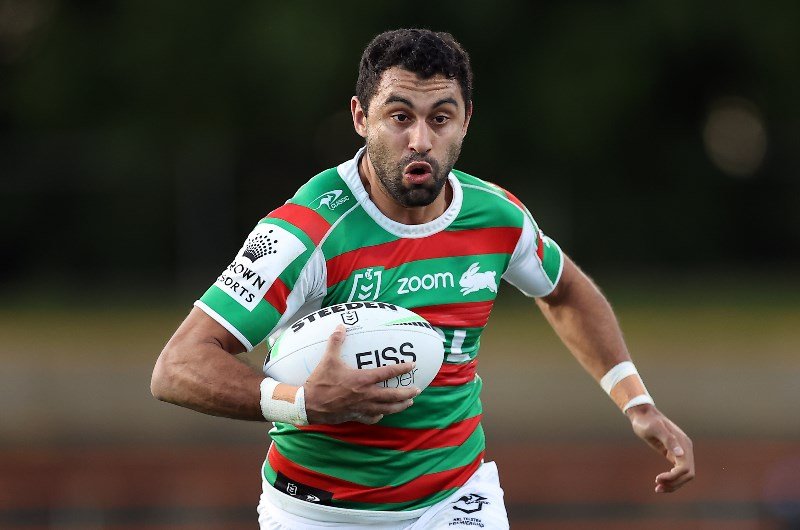 Just the four games spread over four days in the NRL in Round 17 and the match between the Rabbitohs and the Cowboys is the showpiece for Friday night. Both teams are missing players to Origin duty yet for Souths they get to keep Cody Walker and Adam Reynolds for the clash. Let’s see who we can rely on in these Draftstars contests

Draftstars have a single game contest pool of $15,000+ along with Mini and Micro contests in the lobby.

Newcastle - Very High chance of rain (95%) with amounts up to 15mm throughout the day. Check before kick-off but it looks to be a wet night in the Hunter.

Both teams have been affected by Origin but more importantly the Rabbitohs. Dane Gagai, Latrell Mitchell, Jai Arrow, Jaydn Su’A and Cameron Murray are all in camp. Thomas Burgess will start in the front row, Benji Marshall will start at hooker, Hame Sele will start at Lock along with Blake Taaffe at fullback and Braidon Burns in the centres. Patrick Mago and Peter Mamouzelos join the bench.

For the Cowboys, Daejarn Asi replaces Val Holmes at fullback and Connolly Lemuelu comes into the centres for Hamiso Tabuai-Fidow who has also been named in the Origin squad.

Try location through Round 17

This is nothing new for the Rabbitohs losing stars to Origin duty who still have Walker, Reynolds and Johnston in the side. Souths depth is excellent and the books have the Bunnies taking care of business in Newcastle. Expect some heavy Souths combos for this contest.

Picking an interchange hooker in his 2nd match? That’s insane… I actually had a sprinkling of Mamouzelos back in June when Benji Marshall started at Hooker against the Knights. Marshall was pretty ordinary fantasy wise, making 30 tackles but missing a couple and conceding three errors. Mamouzelos has been likened to Damien Cook version 2.0 and in his 30 mins on debut, he quickly scored 27 fantasy points. You are going to concede a fair few points to Reece Robson but I’d take the $6k savings.

Apart from Jayd’n Su’A who is a bit over priced at $11,670, all pieces of the starting pack for the Bunnies are in play as value selections. Hame Sele $8,930 and Mark Nicholls $9,830 are the two I like the most with their ability to tackle break to boost their consistent tackles and run metres. If you have the salary savings then moving up to Keaon Kolamatangi $11,530 and Thomas Burgess $10,740 will give you a lower ownership on the field.

This is a weather dependent selection, especially if the surface/conditions are really wet but Johnston has been on a fantasy tear in the past 4 weeks. 10 tries and a fantasy average of 65 fantasy points. The left side of the Rabbits attack is the most lethal in the competition and still has Cody Walker calling the shots down the left edge. The price tag is massive for Johnston but there is enough value from the forward pack to squeeze him in.

Drinkwater’s salary just sits below Reynolds and Walker on Draftstars and has just barely outscored the pair in fantasy points in his last three games. Note the Cowboys have lost their last three matches (2 were thumpings) yet Drinkwater’s fantasy output has not suffered. Great GPP play, especially if the Cowboys can hang around and be competitive against this rejigged Souths side. Even his halves partner Tom Dearden who is much cheaper will drag ownership away.

UPDATE: There is some late mail suggesting that Asi and Drinkwater might change positions. This will make Drinkwater's fantasy value sink to the bottom of the Hunter river. If this occurs then move your way up to Reynolds or Walker.

Until his salary gets back to where it should be, then Taumalolo is going to be a popular play at his price tag. Back to back 50FP performances are fine but if he can increase his run meters then we can look forward to 60+ fantasy scores. If you are not too keen on stacking the Souths forward pack then look to have Taumalolo as one of your first selections, especially if conditions suit the grind of forward pack play. 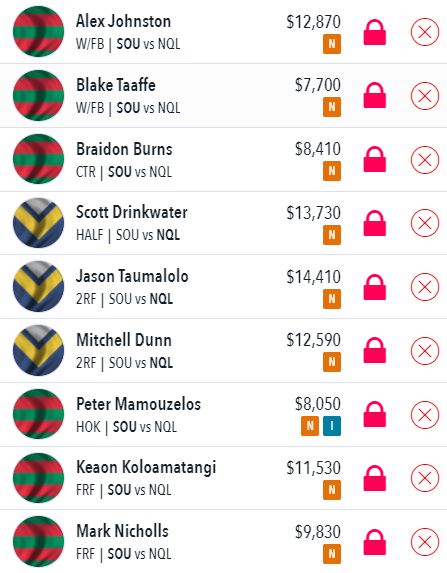