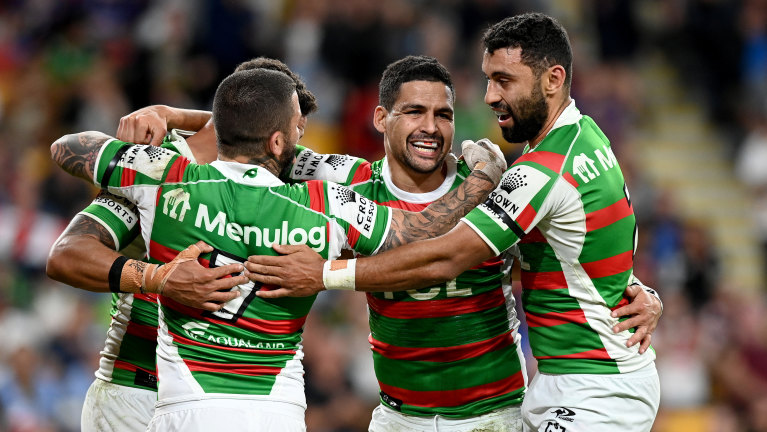 It feels like a while since we’ve had a proper Super Saturday, so this one is very welcome even with a bit of an Origin fatigue factor. We start with the Titans hosting the Roosters, with both teams having looked a bit out of gas recently. The Roosters should be freshened up coming off a bye and only Tedesco backing up from Origin. Next the Knights travel down the highway to play the Rabbitohs. The Knights are struggling, but they do have just one Origin player to the Rabbitohs six. Finally, the struggling Raiders welcome the enigmatic Broncos into a frosty Canberra night to see if either team can spark an unlikely resurgence in the second half of the season.

The Titans are expected to welcome only David Fifita and Tino Fa’asuamaleaui. As Mo Fotuaika is out suspended and AJ Brimson is out with a knee injury from Origin duty. Jayden Campbell will be back at Fullback for this one. Greg Marzhew holds his spot on the wing after impressing in his long-awaited debut. The Roosters lose Nat Butcher, with Angus Crichton back from suspension to take that spot in the second-row. Sam Walker returns to the halves after a rest. Siosiua Taukeiaho is out of the side after being named with Fletcher Baker to play in the front rower.

UPDATE: James Tedesco has been ruled out for the Roosters! Manu goes to Fullback and Joseph Suaalii will play in the centres.

The Rabbitohs had the bye last week, have a few Origin related changes that include the resting of Damien Cook, Cameron Murrary, Dane Gagai and Jai Arrow. Braidon Burns comes into the centres, and Mark Nicholls will start at prop. Jacob Host is named to start with Jaydn Su’a on the bench. This team will constantly evolve, so keep an eye on news. The Knights lose Starford To’a to injury, with a reshuffle seeing Enari Tuala moving to the wing, Kurt Mann to centre, and Phoenix Crossland returning in the halves next to Jake Clifford. Daniel Saifiti returns after Origin, pushing Sauaso Sue back to the bench and Matt Croker out of the team.

The Raiders have several changes, with Caleb Aekins, Curtis Scott, Corey Horsburgh and Ryan James all committed for various reasons. Bailey Simonsson shifts to fullback with Sami Valemei and Matt Timoko coming into the backline. Josh Papalii returns at prop, and Joseph Tapine comes back onto the bench. The Broncos continue shuffle the decks, with the headline news being the return of Karmichael Hunt after 12 years away from the NRL! He’ll take the place of Tyson Gamble in the halves. Drama on Friday with the injury to Albert Kelly. Cory Paix was named in the reserves but the Broncos are looking to get Tyson Gamble back in the team. UPDATE: Tyson Gamble is cleared to play and will start. While Jamayne Isaako has been dropped with Herbie Farnworth moving to fullback. Dale Copley comes in at centre, and Payne Haas and Xavier Coates return from Origin, with Ethan Bullemor and David Mead forced out of the team.

On paper none of these games look particularly close, but there are plenty of moving parts with some indifferent form and Origin players backing up or rested. I can’t see the Roosters being beaten, and it’s hard to back the Knights without Ponga, Pearce, Frizell and Klemmer. Could the key be gambling on a Broncos upset in the late game to bring your lineups home strong?

The Titans defence has been woeful for a while now, and the Roosters should be able to get things back on track after a week off and getting some troops back. Ikuvalu is a player with a massive ceiling if he can jag multiple tries, as we’ve already seen with a 79 earlier this season. With games blowing out more often under the new rules, the chance of a couple of magical Sam Walker passes putting him over the line is pretty good, and he can be played at WFB or CTR.

Adam Reynolds has finally seen his price go back up after a big dip, but Walker is still very cheap for his usual high 40’s output. With the Rabbitohs maintaining some solid form, I think they’ll overcome their Origin hangover comfortably against an unsettled Knights team. They like to do most of their damage down the left edge, where Walker sets up most of the play for Latrell Mitchell and Alex Johnston. I can’t see Newcastle coming up with an answer this week, and Walker should be able to fill his boots with attacking points.

The ‘lesser’ of the Saifiti twins is basically the same player as his brother, he’s just usually stuck in the understudy role. With Klemmer out, he showed what he could do last week by putting up a strong 52 point in 52 minutes, all in base stats. He gets the chance to start next to his brother Daniel this week, and his price is still low enough to represent excellent value. The Knights will have plenty of defending to do again, so I expect a safe 40+ and 50+ upside without having to do anything special in attack.

I can’t believe I’m ‘hating’ Haas twice in the same week, especially after he proved me wrong with a great stint in Origin from the bench, landing on the winning lineup. This time it’s partly about the fact that he’s backing up that big effort 4 days later and should surely have a little less energy to spare (I’m aware he’s an aerobic freak), but also just that there are plenty of good value options at the position. He can still give you a 60-something easily enough, but at this price it will likely take more than that.

Mitch Barnett is another back rower I don’t love this week as his minutes have been slashed dramatically since moving to lock. Has not played over 55 minutes in his last 5 games and his price hasn’t fully adjusted yet, so we’ll need to wait a little longer before considering him as a play.

I usually like to save this section for a muddled hooker position, but with several decent plays there today I’m highlighting another Origin player. Wighton only played limited minutes as a utility, so he should be relatively fresh. The bigger question mark comes from he indifferent form of himself and his team. Wighton hasn’t scored over 35 for more than a month, and the Raiders have lost 7 of their last 8 games. Did the bye last week allow them to sort some things out, will they be able to make light work of the Broncos, or is the season a lost cause? Either way Wighton is a player with a huge ceiling, and he’s going to hit again sooner or later. Special mention goes to Karmichael Hunt, who is very cheap and can likely still play at 34 years of age. If you think he can inject himself right away and contribute to a Broncos upset, he could be an excellent play. 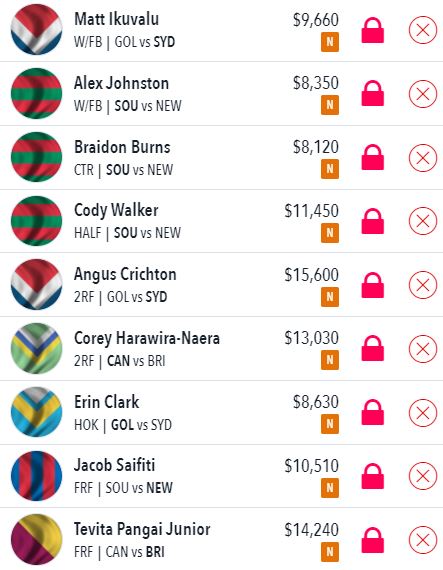