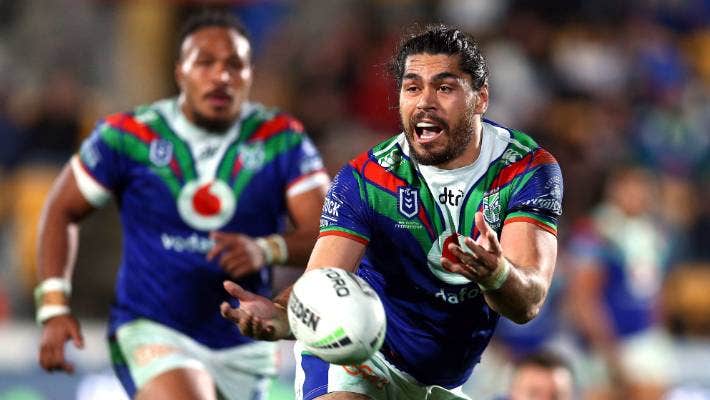 We are back to the grind of Friday Night NRL Double-Headers as we inch closer to the State of Origin period. With three teams outside of the top 8 and the Dragons hanging on, this round of matches could be pivotal if teams want to keep their finals hopes alive. We start on the Central Coast with the Warriors (4-6) hosting the Wests Tigers (3-7) in the early game before the rivalry of the Dragons (5-5) heading down to Nestrata Jubilee Stadium to take on the Sharks (2-8).

On Draftstars, a $12,000 contest for the Dragons and the Sharks is the highlight on Friday night, along with a $10,000 pool for the Warriors and the Tigers to kick off Friday. We also have a 2-game contest for $3,000 which you can use the “Player Swap” feature on Draftstars. There are also High Roller and Micro contests available for the late game.

Sydney/Gosford - Light chances of rain/showers in the region but small amounts only.

For the Warriors, an elbow injury to Josh Curran will see Jack Murchie get a start in the second row. Kane Evans is back in the front row pushing Jazz Tevaga to the bench. Marcelo Montoya is in the centers after Rocco Berry failed his HIA. Late on Thursday the Warriors announced that Reece Walsh will play Fullback and Roger Tuivasa-Sheck will play on the wing.

The Tigers have named the same 17 from last week's win in Brisbane.

For the Sharks, they too are the same 17 from last week’s loss in Brisbane, that’s 6 losses in a row.

Ok ready for the Dragons changes? Josh McGuire, Tyrell Fuimaono, Mikaele Ravalawa and Tariq Sims are all out due to suspension. Matt Dufty is out with a shoulder injury. So Cody Ramsey is playing at Fullback, Jordan Pereira is back on the wing, Billy Burns will play at centre and Max Feagai will play on a wing as well. Jackson Ford and Poasa Faamausili will be the second-row pairing.

Interestingly the books have the Sharks as favourites after a 6-game losing streak, such as the amount of outs for the Dragons. You would think the players coming in for the Dragons would create a ton of value but Draftstars have identified some leans. For what it is worth, the two high total lines ensures that this could be a large scoring fantasy slate. Let’s see what we can find.

I wasn’t too enthused having a Halfback filling in as a winger but Tracey has been more than serviceable in the spot. While he has been tryless in his past two matches, 8 tackle breaks against the Rabbitohs is encouraging. Against a weakened Dragons outfit with a reshuffled backline, the Sharks will be looking to exploit. Cheap price provides a potential great value.

One value play that Draftstars did miss is Faamausili getting a start at Lock for the Dragons. One look at the scores this season shows low minutes and low fantasy production. However Faamausili is now in line for 40-55 minutes and this will boost his fantasy potential. He is susceptible to a missed tackle so just be wary there.

The young Warriors five-eight has impressed on his return from injury scoring an average of 46 fantasy points in his two games. While Kodi Nikorima has the highest ceiling, the price on Draftstars makes him an attractive option. However he did score two tries in the match against Manly two rounds back so once again his floor is around the 30-35FP mark.

If you have the salary savings then you should make Harris a priority in your lineups. Harris plays 80 minutes, makes his 40+ tackles and runs for 100+ metres. What sets Harris apart from other premium edge forwards is his ability to make off-loads/tackle breaks and loves to sniff a try. Back at this preferred position at Lock and one of my first picked players.

Nice bunch of Hooker options for the four teams here so getting to any such as McCullough, Liddle and Egan are fine. But Brailey does stand out at his discounted price from McCullough and Liddle. No bench cover and despite the blimp performance against the Storm, Brailey has averaged 50+FP in his last 4 matches.

First of all congrats to Adam Doueihi for ruining my fade play last week....

His 70+FP effort against the Cowboys was so long ago and it seems his salary is just hovering at that premium level. Has not scored more than 45FP in 5 games which is the minimum at that salary. Easy fade here where there are better options in the 10K range. 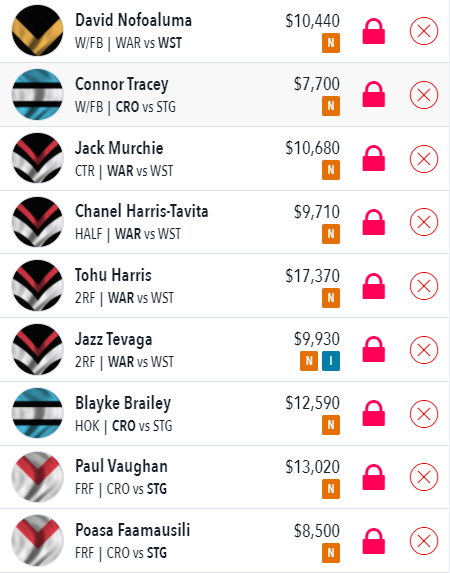