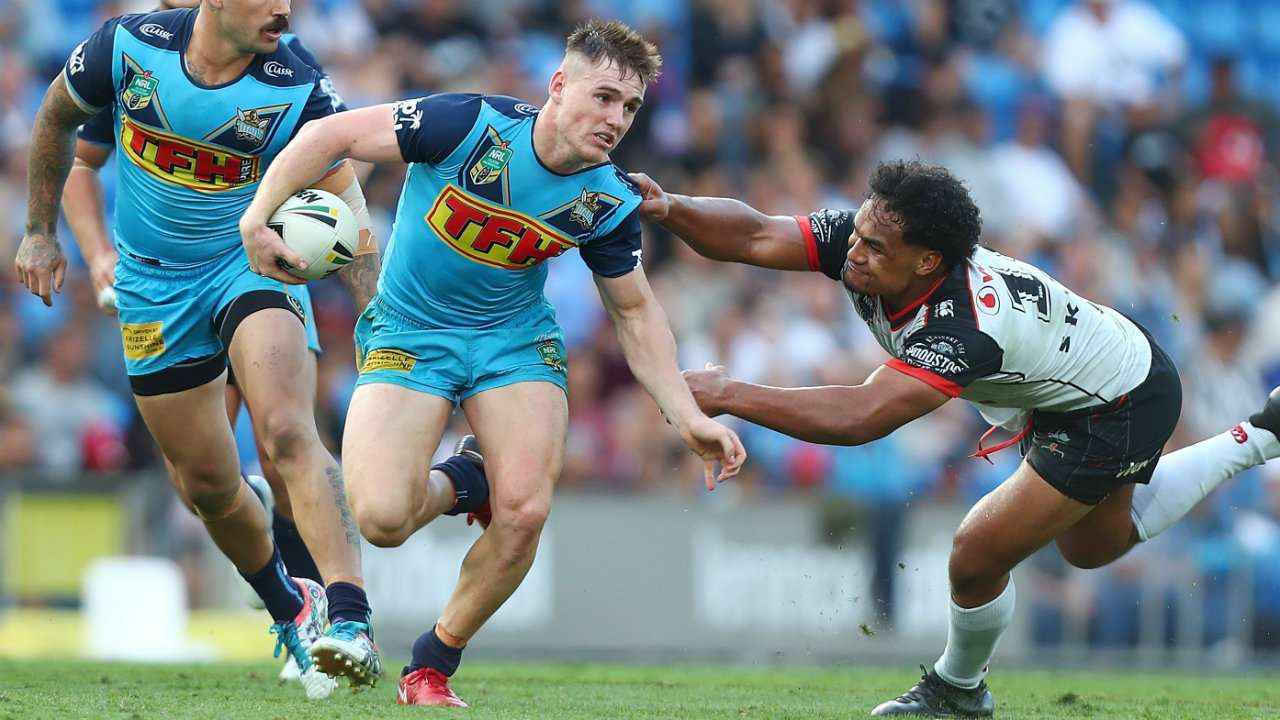 We’ve seen a few games to whet our appetite on opening weekend of the NRL season, but now it’s time for the main course. Super Saturday, a pure back-to-back-to-back sweat. We start with two of the most intriguing teams in the NRL this season, the Warriors host the Titans in Gosford. Then the powerful Roosters squad hosts a weakened Manly outfit at the SCG, before the premiership favourite Panthers welcome a Cowboys lineup which is hard to gauge this year.

The main slate on Draftstars today is a very healthy $25,000 pool with $2,480 up top. The single game slates are also available with some nice prizes, especially the $15,000 pool for the late game. Being a large slate there is bound to be some value that slips through the pricing cracks, and there are indeed some juicy options to explore.

The Warriors have bolstered their forward pack with Addin Fonua-Blake, Curtis Sironen and Ben Murdoch-Masila. They should be able to lay a nice platform for their backs, which include new signing Euan Aitken. The Titans are also sporting some new toys in the forward pack, with David Fifita and Tino Fa’asuamaleaui giving this team unlimited upside after making strides in 2020.

The Roosters look similar to 2020, with Lachlan Lam taking over for Kyle Flanagan in the halves, and Sitili Tupouniua getting a crack on the edge with Boyd Cordner missing half the season. Manly are facing a mini-crisis already with Tom Trbojevic already missing with another hamstring, and no hooker of any note in the squad while Manase Fainu continues to be stood down. For Penrith young-gun Charlie Staines comes in for the departed Josh Mansour, and Paul Momirovski gets first crack at the right centre spot after Brent Naden’s off-season indiscretions. The Cowboys are a hard team to figure out with a new coach and lots of competition for spots, but will start with Scott Drinkwater at fullback, Valentine Holmes on the wing, Jake Clifford at half and Hamiso Tabuai-Fidow at centre. Robson, Molo, Dunn and Marsters are all starters who will know that there are players coming for their spots if they don’t start the season well.

The odds suggest that we’ll start the day with a close affair, before two of the NRL’s powerhouses crush their visitors in the later games. I do expect Manly to struggle at least until Trbojevic is fit, and it could take the Cowboys a while to work things out under Todd Payten. Panthers and Roosters stacks could both be popular. I prefer the Panthers option as their backs are a little cheaper and it’s always nice to have players finishing strong in the late game.

Everyone knows about Brimson now, after he dominated in his Origin debut late last year. He now gets a better forward pack to work behind and has hopefully put his injury issues behind him. The reason I want to highlight him is because he has similar ceiling potential to the established stars above him at WFB (Tedesco and RTS) but comes at a nice discount.

Lam looked pretty handy last year in his brief showings before going down with injury, and now gets a chance to make the spot his own. Playing next to Keary means he should get the chance to kick the ball plenty and he’s shown the ability to break the line and rack up some attacking stats. Throw in a solid defensive game and I think we’ll see his price rise quickly in the early part of the season. Chanel Haris-Tavita is a similar prospect at a similar price, but his matchup today is not as much of a slam-dunk so it may be better to wait and see how the Warriors look.

Sitili had some nice opportunities last year, but at times he did find himself thrown out into the centres to cover an injury. Adam Keighran is now on the bench to cover the backline spots if needed. Sitili should get a red-hot chance to make the spot his own now, and like Lam he has a lot of attacking upside. Taking on a dodgy Manly outfit should be the perfect way to start the season for these young-guns with something to prove.

Foran is back where it all started, which could be a great rugby league story, but isn’t great for fantasy. He’s next to a controlling half in Cherry-Evans, and he may find attacking stats hard to come by against the Roosters. The price is a little too high for me to show any interest in Foran this week.

You’d think that securing the fullback role to start the season would be good news for a talent like Drinkwater, but he’s so far averaged 10 points less there than when he plays in the halves. Things could change under Payten, but I’ll need to wait and see how things develop until I put him into any lineups. The same goes for most of his backline teammates.

Hooker may be a problematic position on this slate. The top guys in Friend and Koroisau could have easy nights in defence as big favourites, and everyone below them has major question marks over their role. Robson was great last year when he got big minutes, but now has Granville and Cotter on the bench to potentially steal his minutes. Croker and Egan are both much less talented and more injury prone players who have less competition for their minutes this week, but nowhere near the ceiling of Robson. Figuring this position out could be the key to finding yourself at the top of the leaderboard. 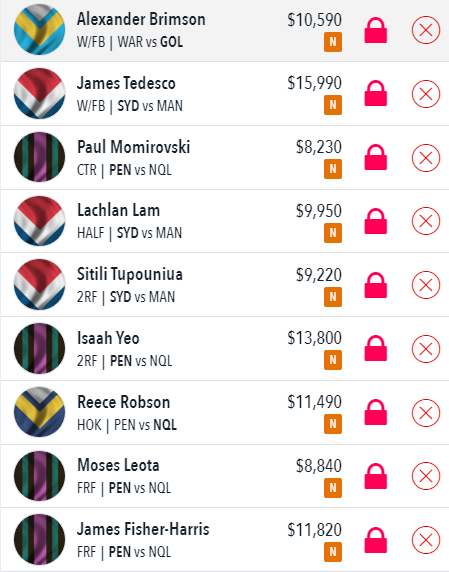