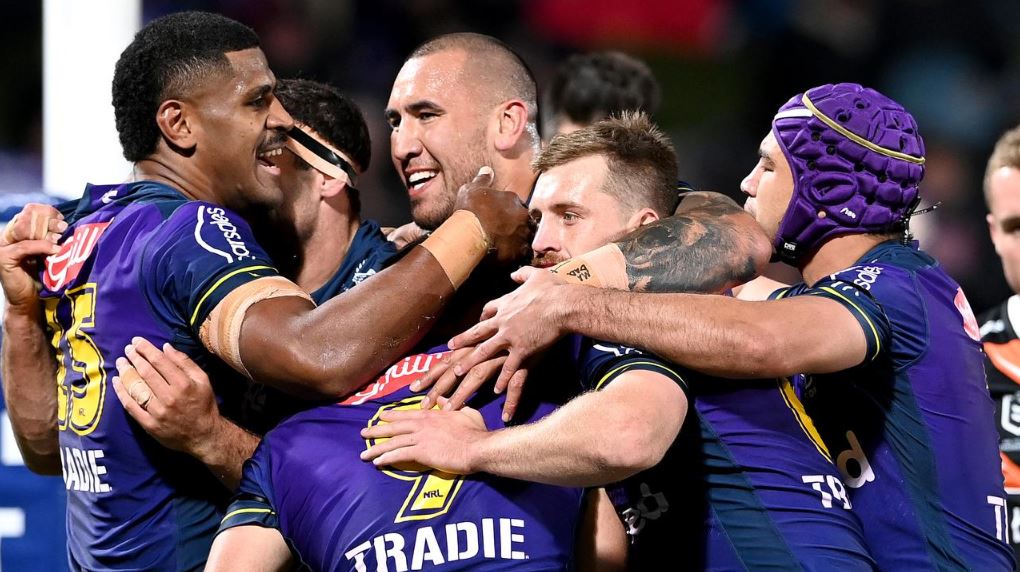 Our second preliminary final features the top 2 teams from the regular season, with the Melbourne Storm and Penrith Panthers battling at Suncorp Stadium. The Storm got here via a 1st place finish in the regular season, and a comfortable victory over Manly in week 1 of the finals. The Panthers had to work a little harder having narrowly lost to the Rabbitohs in week 1, and then winning an 8-6 thriller last weekend over Parramatta. It’s a rematch of last year’s Grand Final, when the Panthers couldn’t match the Storms composure on the biggest stage.

Draftstars has a $15,000 contest with $1,133 to first place. There are also several other contests including the Mini, Micro, and the High Roller.

Both teams have one change for this game. The Storm welcome back Josh Addo-Carr, forcing out Isaac Lumelume from the left wing. The Panthers have brought in Tyrone May as the bench utility in place of Mitch Kenny. The Panthers have Brian To’o named in the reserves, who could come back in in place of Brent Naden if he’s deemed fit. In that case they would be at full strength. UPDATE: Moses Leota has been ruled out for Saturday Night due to a calf injury. Liam Martin has been named in the front row and Spencer Leniu is now on the bench. FURTHER UPDATE: Brian To'o has been cleared to play on the wing. The Storm are at full-strength.

The Storm are heavy favourites, largely because the Panthers have endured a couple of bruising finals while the Storm had an easy win followed by a week off in the lead up. While I feel that is fair enough, I do think the teams are much closer on paper than the odds suggest. With both teams having worked some of their key players back into form in the last month or so, I expect it to be a quality contest either way.

In his 8 full games at fullback this season, Papenhuyzen has averaged 67 points, boosted by having the goal kicking role in most of those games. One injury game and then four games off the bench on his return has led to a big discount, despite averaging 62 in his last 4 since reclaiming the starting role. With question marks over everyone else available at W/FB, it will be hard to get away from him on this slate.

It’s been a season of two halves for Capewell, averaging 48 in his first 10 games and then 32 in his next 10, partly due to some injury issues and positional changes, asked to play roles at centre and off the bench. Last week we saw a major turnaround when he scored 64 points, driven by 46 tackles and a try. If he gets a repeat of the 70 minutes he got, then I expect this price to be far too low once again.

Another Panther that has rediscovered his best form, Yeo has averaged 58 in his last 7 games, similar to what we saw in his standout 2020 season. In this case the price has risen accordingly, but it’s still very viable. His role looks very secure with around 70 minutes, and the big stage will not faze him at all.

Now for a Panther that doesn’t have a secure role, Kikau has taken to starting from the bench, and last week we saw him struggle to crack 30 minutes. Given his reliance on big plays for his scoring, it will be very difficult to access his ceiling against the best team in the comp. Yeo, Capewell, and any of the Storm trio of Kaufusi, Bromwich and Finucane all look a lot safer.

Crichton as a winger has not been close to the fullback or centre version. His normal average is north of 35, but on the wing it’s barely been 25 in 10 or so games. He’ll need multiple tries to get there at this price, and I’m willing to bet against that against the Storm. Of course, none of the wingers look overly attractive in this game, pending the fitness of Josh Addo-Carr.

Who Knows - The Hooker position

Some cheeky pricing sees all three players at the HKR position within $230 of each other. Grant, Smith and Koroisau all have similar scoring profiles, so it is close to impossible to separate them. Of course, the Storm pair are somewhat sharing the role, with Grant starting from the bench and Smith moving into the forward pack when Grant comes on. We should also factor in that Smith copped an injury in the first final and has had a number of in-game injuries this season. Koroisau could receive a little boost with Kenny no longer on the bench, as Tyrone May is less of a direct backup. I guess that means I rank the trio Koroisau>Grant>Smith, but it could go anyway. 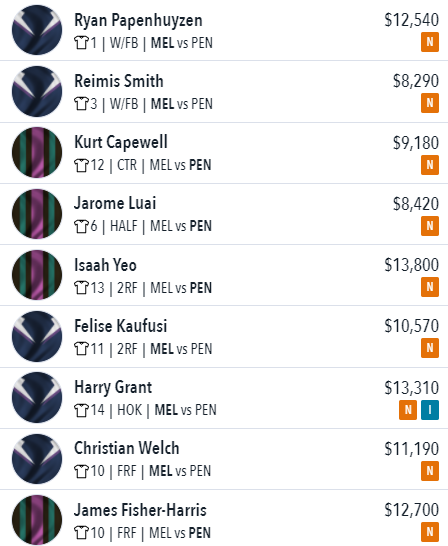