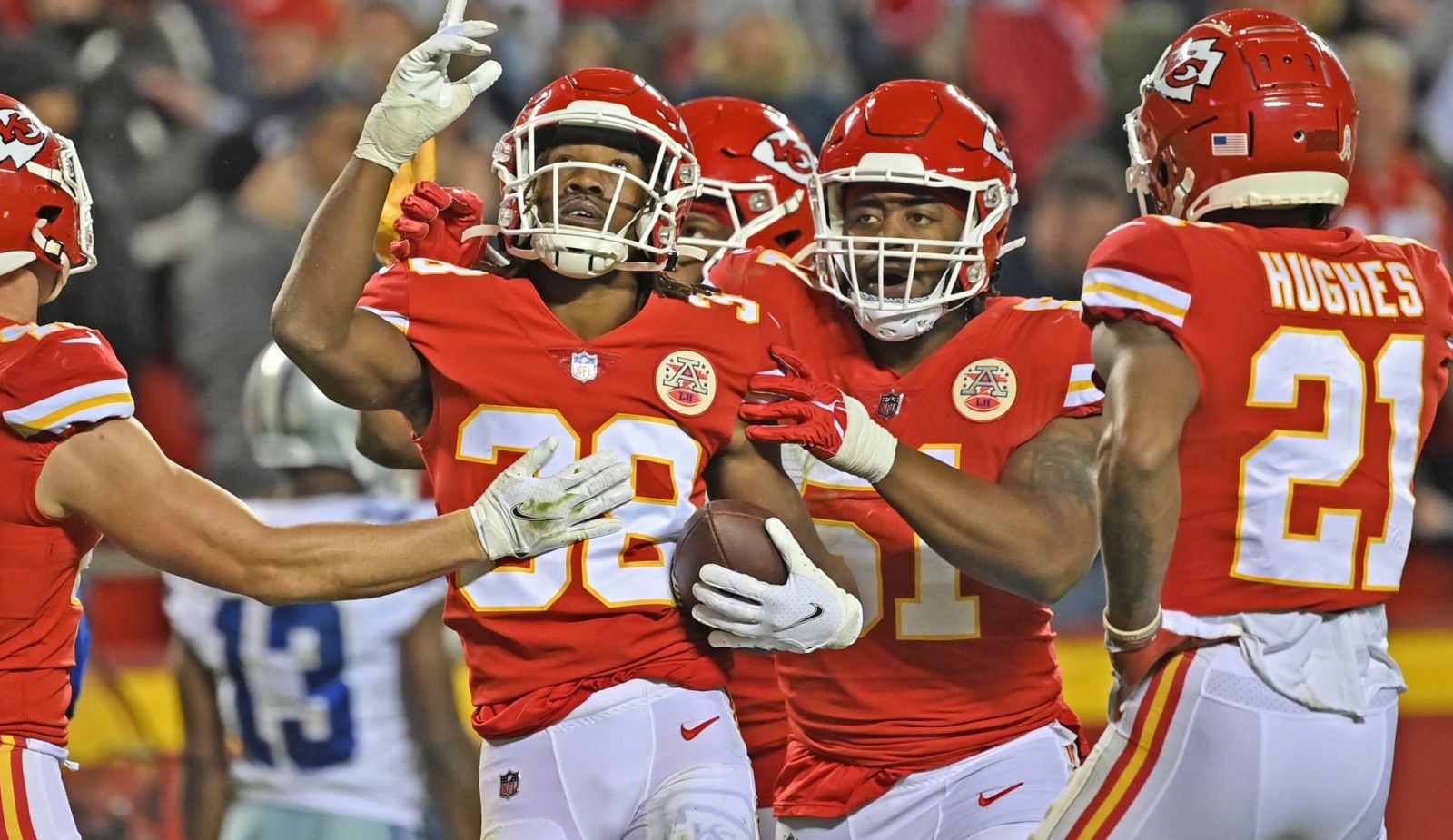 The postseason is here! Whilst we have bid farewell to Redzone on our TVs every Monday morning, we welcome some of the most high stakes, watchable NFL action instead. Draftstars has given us a $10,000 slate with $970 to first place, which kicks off at 5am on Monday. It’s a 3 game slate with the Buccaneers hosting the Eagles, the Cowboys hosting the 49ers, and the Chiefs hosting the Steelers. The home teams are handy favourites in all 3 games. The first two games look to have very pleasant weather for this time of the year (winter) in America, while the Chiefs game will be close to freezing but still fine. Let's get into some plays.

Tom Brady: The GOAT turns 45 this year! To be honest I thought he was there already, it’s hard to keep track. That’s partly because he hardly looks any different on the field, continuing to do whatever the situation calls for by spreading the ball around efficiently and picking his moments for the deep shot. Consecutive 300+ yards passing and 3 TDS shows the form is fine, and we know that he thrives in big games (understatement), so I’m feeling like the discount to Mahomes and Prescott who’ve both averaged less than him this season is generous.

Elijah Mitchell: It’s been a really nice rookie season from the unheralded 6th round draft pick, jumping up the queue thanks to some injuries and then staying there with his good play. It was a down score last week in the team's win, but 85 yards with no peripheral stats is nothing to sneeze at. In a competitive game he should see some pass catching and redzone opportunities to go with his solid rushing base, and has just as much upside as Ezekiel Elliot and Najee Harris priced above him. Leonard Fournette should play, but just how close to 100% he’ll be after a month out with injury is a source of scepticism.

Tony Pollard: With only one 20+ score on the season, Pollard is certainly a dart throw on this slate, but there isn’t much in the cheaper range that stands out. Of course his workload is severely limited by the presence of Elliot, with his best chance being the team getting far behind and getting him involved in some fast moving passing sets. Adding to his 2(!) TDs for the season would also help. Other options in this range include Miles Sanders, Clyde Edwards-Helaire and Darrell Williams, but all have question marks over injury or how the workload will be shared within their team (or both).

Deebo Samuel: If we’re looking for a safe way to spend up on this slate, we need look no further than Deebo. We’ve seen it all season, with the only slight lull coming in the period where he was transitioning from a pure receiver into a running back/wide receiver. Now that the team has managed to get the balance right by keeping his passing workload at it’s usual levels while adding some rushing opportunities, he has just as much upside as ever. Last week's passing touchdown might hint at him adding QB to a triple threat of roles, but we don’t need it. No matter the game situation, Deebo will be getting plenty of high value opportunities.

Amari Cooper: Cooper hasn’t quite been at his best this season, struggling to reach the heights of week 1 when he went 40+. Still, we know that the ceiling is good and the absence of Michael Gallup for this game can only help ensure a solid volume of targets. If he can cross 100 yards for the 3rd time this season then 20+ points is more than on the cards, with any TD action just a bonus. It’s a bit of a leverage play off the more appealing Lamb, Hill, Evans types priced above him.

Breshad Perriman: Another play that takes a bit of faith. Perriman has started to see some opportunities the last couple of weeks with Chris Godwin injured and Antonio Brown going off the rails again. Potentially the #3 option behind Evans and Gronkowski, I like Perriman as a stack partner with Brady who has shown us some upside on rare occasions in the past. The team willl be all systems go for this game, and the running game could be limited by Fournette's fitness and the Eagle's ability to slow that part of the opposition's game. Perriman has the big play ability to pay this price tag off even if the volume doesn’t materialise.

Jauan Jennings: We’ll need some minimum priced options to be able to fit in the likes of Brady & Deebo, and Jennings has some appeal after last weeks 27 point outing. I’m not expecting anything like that volume or scoring, but he does appear to have some kind of role behind Deebo, Aiyuk and Kittle. 2+ targets in 5 straight games is enough for a salary saver on a small slate like this. Ray-Ray Mcloud is another option having earned a similar role at the Steelers.

Dalton Schultz: There are a surprising amount of premium TEs on this slate, but it’s so hard to fit any of them in. Gronkowski will have a huge role for the depleted Buccs, Kelce has been finding some of his old form even if not at his absolute peak anymore, and Kittle has huge upside even though his purple patch has been over for a few weeks now. Instead, I’m looking at Schultz and Goedert who both see strong volume, and I’m leaning towards Schultz who has twice as many TDs this season and has a better QB throwing him the ball.

Kansas City Chiefs: I’m not liking any Steelers really, so the Chiefs stand out as a team that can rack up ahead and pile the pressure onto a shaky and immobile veteran QB. I’m also fine with the Buccs as a play, so it’s a case of trying to save enough salary elsewhere to have the luxury of spending up at DST. 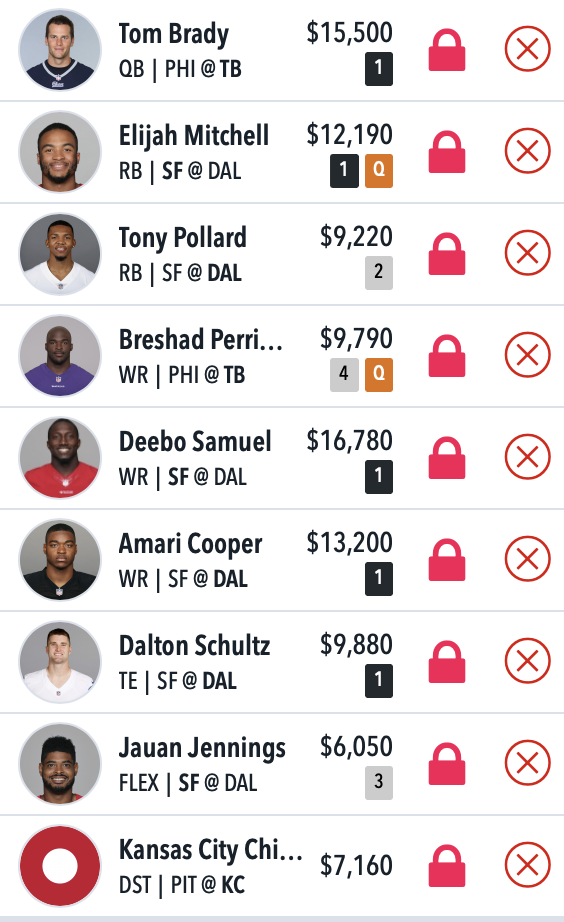