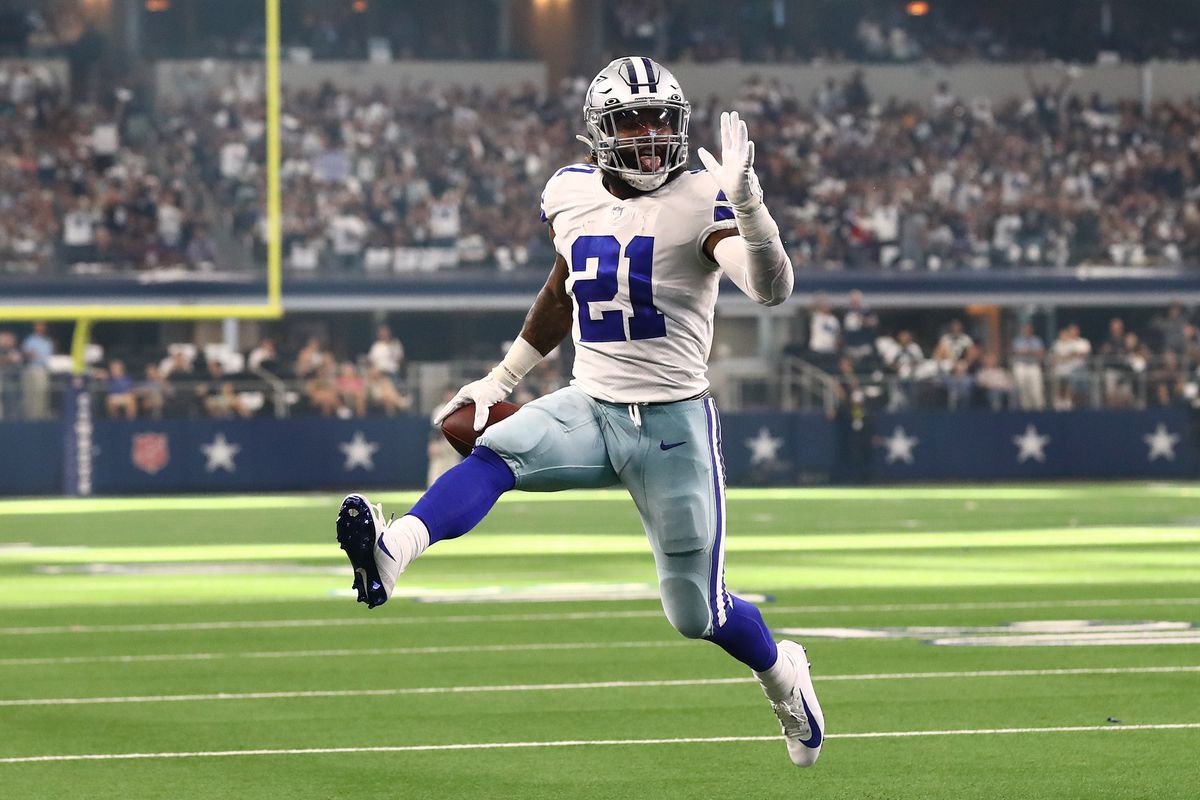 We’ve made it week 9, after which we’ll be at the halfway point of this 18 week regular season. Another spate of injuries and other issues to the likes of Derrick Henry, Calvin Ridley, Jameis Winston & Henry Ruggs has changed the landscape once again. I for one am truly sad that I won’t be able to write up Henry every week for the rest of the season, perhaps I’ll just have to jam in Cooper Kupp every week instead. It’s an 11 game main slate, with Draftstars offering a $30,000 on Draftstars with $2,666 to first place.

As always there are a lot of cheap QBs to consider, with Matt Ryan, Trevor Lawrence and even Tyrod Taylor all looking like viable salary savers despite tough matchups. Tua stands out because this is the complete opposite of a tough matchup, with Houston essentially tanking. I also like Tua because another injury to Devante Parker this week means that his stacking partners are very obvious. Two of them are also in this article (Gaskin, Gesicki), while Jaylen Waddle is also viable despite starting to get a little expensive.

It looks like we’ll only have 3 of the elite fantasy QBs on this slate if Kyler Murray is unable to play, and Allen stands out as the clear #1 option. A nice matchup with the Jaguars, combined with good form, an enormous ceiling and good stacking partners makes it hard to pick any holes in him at all. Because QB is the most evenly distributed position I’ll still be stacking many other QBS, but Allen & his Bills teammates will be my starting point.

I may not have played Zeke at all this season, but he has been pretty good, and the price is more than fair for the matchup with the Broncos. While Denver is typically a tough unit to crack, they traded Von Miller this week and look like they might be close to conceding that they’re out of the running this season. Dallas is very much able to try to win every game, and with Dak Prescott back the team should be firing on all cylinders. I’m favouring Zeke slightly over the likes of Chubb and Mixon who also have merit, but a few more question marks.

Attacking the Houston matchup with cheap RBs has been a popular play this season, and Gaskin should be no exception. The Dolphins are slowly improving, and the RB role is a little less crowded this week with Malcolm Brown out. Gaskin has a useful combination of pass-catching ability and goal-line work which sets up nicely for a chance at a ceiling game. We’ve already seen a 30+ score this season, but anything around the 20 mark would be sufficient.

It only took one middling week for the price to come back down on Chase, so it looks like a good time to go in on him again. While the Browns can be a tough matchup who tend to play in low scoring games, Chase is a big play merchant who can get the job done against anybody. The Bengals will be primed to bounce back from a shock loss last week and stick it to their division rivals. The whole Bengals passing group is priced very generously, making for an attractive contrarian double stack.

While we’re talking about cheap players with big ceilings, Hollywood has somehow fallen under 10k despite 5/7 scores this season being 19+. The Ravens continue to throw the ball more than we’ve seen before, with Lamar Jackson preferring Brown as a deep target whenever the opportunity arises. The Vikings are not exactly a fearsome defence, so I don’t see much downside to this play at all. The Jackson-Brown stack is also very much in play.

There is enough value around to make multiple expensive plays viable, and Hill is the one with the absolute highest ceiling on the slate. Even with the Chiefs struggling, Hill has put up 4 good scores in 8 games this season, including two massive 40+ outings. The matchup with the Packers is a little less thrilling without Aaron Rodgers, but we can still expect the Chiefs to try to put it in top gear to find some much needed form. Davante Adams is less appealing with Jordan Love at QB, but he’s still worth considering as a mini stack with Hill if the game does turn into a shootout.

Another expensive option, but with no Derrick Henry to consider it’s much easier to pay up at other positions instead. Unlike Hill, Diggs has not been replicating his big ceiling scores of last season. Still, the Jaguars matchups appealing, and he’s my preferred stacking partner with Allen, creating one of the highest ceiling stacks on the slate.

Maybe Big Mike is my new every week guy for this article. He has been priced up a bit this week due to the Texans matchup, but I still love him for his volume and touchdown upside in an easy spot. Unfortunately, we may not need to consider many tight ends thanks to the next recommendation…

We might have one of the biggest gifts we’ll get all season in the form of a minimum priced George Kittle. Kittle looks likely to return from injured reserve after a full week of practice, and coach Kyle Shanahan has said he won’t be limited. It looks like a chance to lock him in and focus on finding ways to spend the extra salary. However a tweet from Adam Scheff has made me think twice....

49ers’ TE George Kittle, who returns Sunday from injured reserve after battling a calf injury, will be on a pitch count vs. the Cardinals and is expected to play roughly half the game.

New England Patriots ($7,030 DS $4,100 DK) We’ve seen DSTs have success against the Panthers, including last week when the Eagles racked up 21 points. This week it looks likely that Sam Darnold will not play thanks to a concussion and a shoulder injury. P.J. Walker is the backup, and that sets up nicely for a talented Patriots unit to create some turnovers. The 49ers and Falcons are other teams likely to play against backup QBS, while I don’t mind the Raiders chances against the banged-up Giants and Daniel Jones. 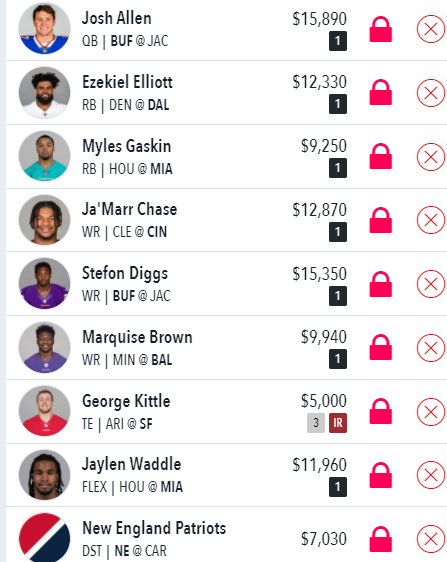 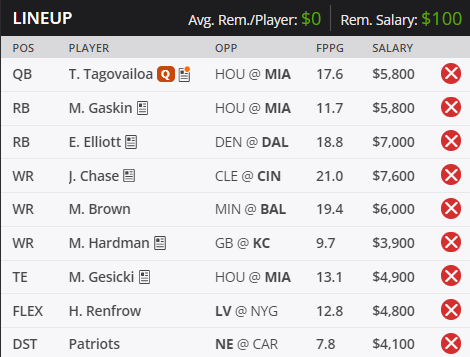