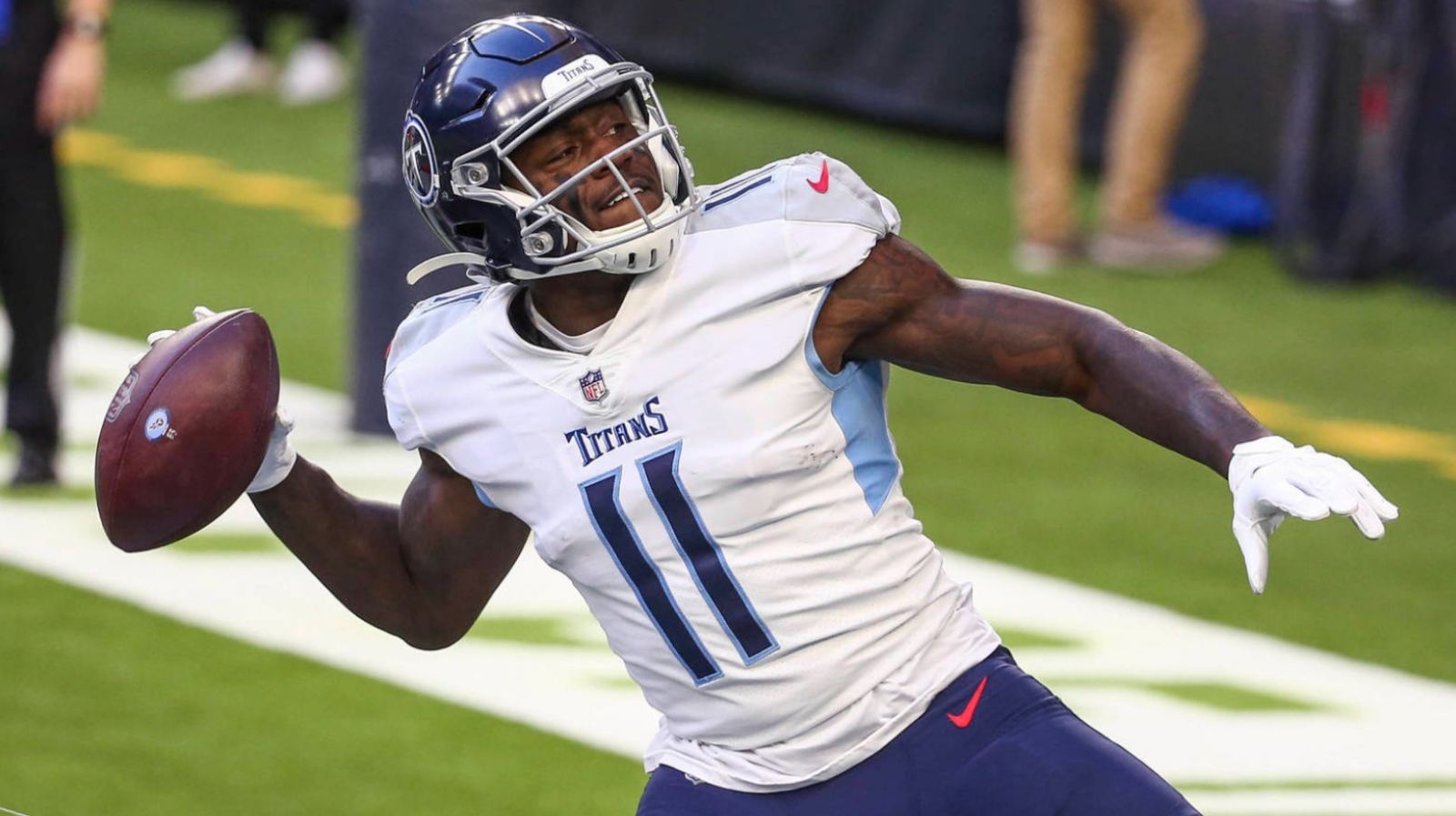 We’re entering the second half of the season, and Draftstars continues to deliver the goods with another $30,000 contest with $2,666 to first place. It’s an 11-game slate this week with a couple of juicy high total games including the Vikings v Chargers in the late window. Of course, knowing which games are going to deliver fantasy goodness is never easy, so there are plenty of good plays all over this slate. Let’s get into it.

It didn’t work last week when I wrote up Allen and he had his worst game of the season, but let’s not get blinded by that result. He remains the highest ceiling QB on a week to week basis and is priced not too far ahead of several options who don’t have his 40 point capabilities. The matchup with the Jets could turn into a dour affair, but is equally likely to become another game where the Bills choose to run up a score on a hapless opponent. Anyone who played him last week got it wrong, but let’s not compound the error by missing out on a bounce back game.

I’ve said a few times now that Herbert is trending towards matching Allen in both real life and fantasy, if he’s not already there. The prototypical size and athleticism combined with incredible arm talent is great to watch, but it also leads to an enormous ceiling whenever the game environment hits. With a 54 point total this week there is every chance that it’s another good week for Herbert.

It’s starting to feel like Patterson is one player where the price is not keeping pace with his role. Always known as a big play waiting to happen, Patterson is thriving on actually having a defined role with the Falcons this season. That role only grew last week with Calvin Ridley no longer on the field and Patterson getting an even heavier workload in the passing game. That may come at the expense of some of the rushing opportunities he was getting, but in a PPR format it’s a good trade-off. With 5/8 scores of 18+ this season and only one truly bad game, it’s hard to look past Patterson in a solid matchup with the Cowboys.

D’Ernest Johnson ($8,000 DS $4,700 DK) DJ could be the big value play of the week if news continues to break the way that it has been. Nick Chubb has a positive COVID test, and seems unlikely to play at this stage. With Kareem Hunt injured and Demetric Felton also testing positive, Johnson might be the only healthy back on the team. We already saw one massive spike week in the absence of the teams’ stars, and it would be hard for him to let us down at minimum price if he is the lead back come Monday morning. Keep an eye on the news and final line-ups for this one.

Jonathan Taylor ($16,260 DS $8,100 DK) After last week’s soft pricing saw the likes of Chubb, Elliott & Cook all heavily owned, the correction has come in a big way with all the studs priced up near their maximum. While the likes of Najee Harris, Dalvin Cook and Christian McCaffery still look like good plays, I’ll take the slight discount to Taylor and try to ride his tidal wave of momentum. 6 straight games of 20+ points, with 3 of those over 30. Coming off a 9-day break into a matchup with the Jaguars sets up as a perfect opportunity to continue the domination, making him a safer way to spend up on this slate.

A.J Green ($6,000 DS $4,600 DK) If Chubb does end up playing, another good source of minimum price value is available in the form of Green. Returning from a week on the COVID list, Green has had a strong enough role this season to feel safe playing him at such a big discount. His age and declining abilities make it hard to expect any more than the 19-point ceiling we’ve seen so far this season, but with half his scores over 13 it’s likely that he’ll do enough to keep your lineup afloat at the very least.

A.J Brown ($14,500 DS $7,800 DK) Another A.J. that I’m keen on is this big unit from the Titans, who has been seeing big volume since getting healthy in recent weeks. While it didn’t hit last week, the two previous weeks delivered 30+ scores and I like the little discount to the likes of Diggs and Adams above him. The matchup with the Saints may seem tough, but the Saints are excellent at stopping the run and should force Ryan Tannehill to throw the ball a lot. Brown should be the main beneficiary of that, and only needs one touchdown to get into those high ceiling areas.

Mike Williams ($12,570 DS $6,600 DK) If I’m betting on Herbert this week, then you can bet that I’m stacking him with Big Mike. Strangely, Williams started the season with 4 big scores in the first 5 weeks (7+ receptions in each) and has crashed back to earth with three straight weeks of just two receptions and single figure fantasy scores. That means that his price has come back down, and most fantasy players should be scared to play him this week. In a high total game, I see no reason that he can’t get things going again and rebound in a big way.

Dallas Goedert ($7,090 DS $4,700 DK) We don’t have any of the usual top-end suspects available at TE on this slate, with literally no-one priced over 10k. That means the opportunity cost of taking value at the position is even lower than usual, and it likely won’t take a big performance to pay off the price for anyone. The price I like the most is that of Goedert, who churns out fairly solid performances most weeks on the back of middling volume and a moderate redzone role. While he’s yet to hit a ceiling score this season, I do feel it is a possibility on any given week. The slight concern is the erratic QB play of Jalen Hurts.

Dan Arnold ($6,330 DS $3,500 DK) Goedert got a boost from his teammate Zach Ertz changing teams midseason, while Arnold got his own boost by moving to the Jaguars. While they are not a good team, they do have just enough of a defined TE role to lead to solid volume and some TD upside. He’s yet to score one this season, but has still managed 10+ points in 3 of his last 4 which would probably be a pass mark at this price. While the Colts are not an easy matchup right now, I think the Jaguars can stay in the game and keep the ball moving enough to give Arnold a decent ceiling. Again, with so many middling options on the slate, it’s hard to distinguish between a lot of plays at TE and almost anyone is viable, particularly in a stack or as a bring back.

Buffalo Bills ($7,840 DS $4,000 DK) While it is unusual to play a QB and DST from the same team, the Bills are one team that can get it done. We’ve already seen them run up scores of 35-0 and 40-0 on bad opponents this season, and it wouldn’t shock me to see something similar against the Jets this week. The play of Jets QB Mike White is the big unknown, with an impressive debut followed by an injury last week. If he’s actually good, then it might be wise to look elsewhere. If like most backups he’s prone to an error-strewn performance on any given week, then I like the Bills as much as any option on the slate. Tampa Bay & the Browns look like viable alternatives to me. 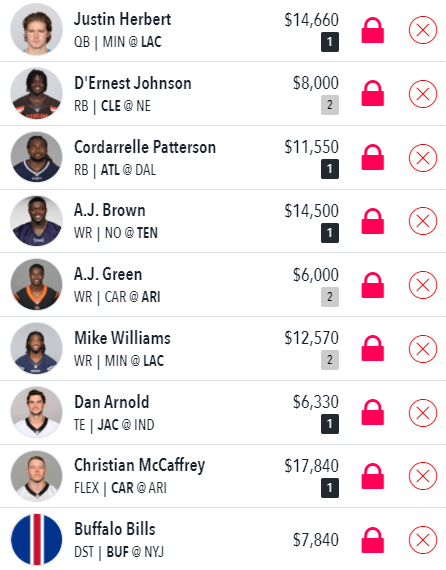 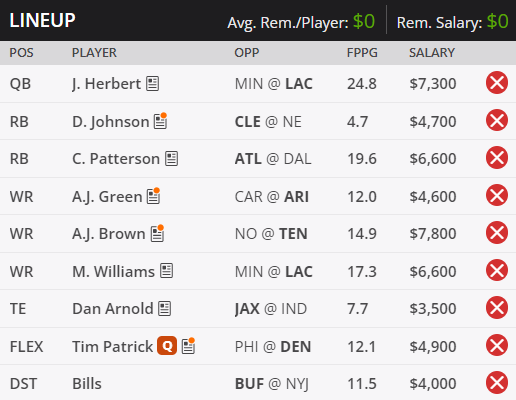