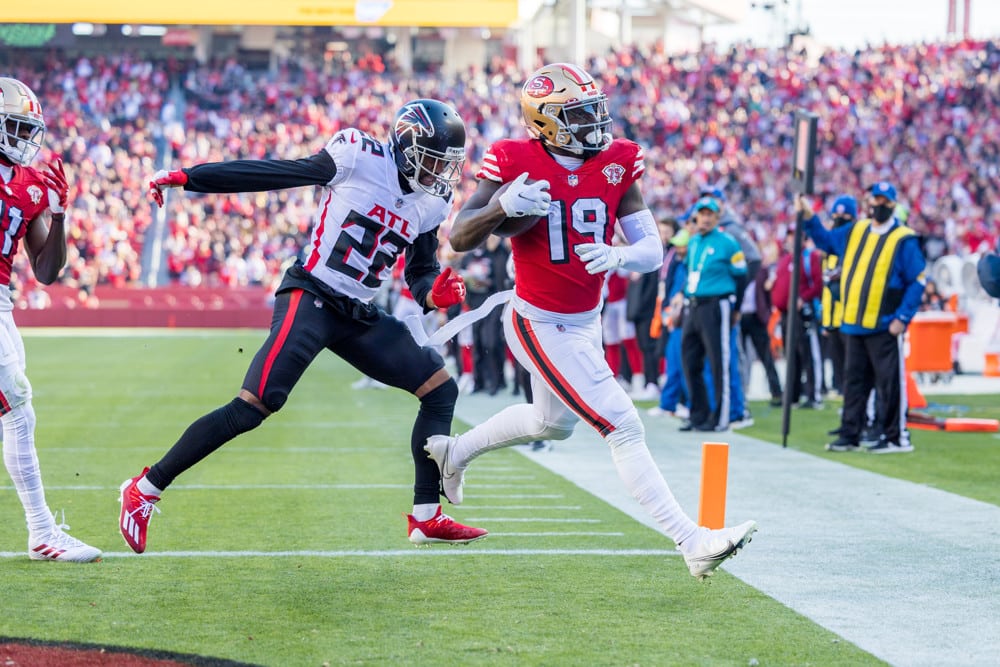 It is the last Thursday Night matchup for the NFL season as Week 16 gets underway Friday morning in Australia. The Tennessee Titans (9-5) are hosting the San Francisco 49ers (8-6) with both teams entrenched in playoff contention. Whilst the 49ers might struggle to win the NFC West, the Titans are looking to put some breathing space between themselves and the Colts in the AFC South. Shaping up to be an interesting contest on Christmas Eve.

49ers - RB Eli Mitchell is out with a knee injury. Mitchell hasn’t played since Week 13. Although RB Trey Sermon will be off injury reserve.

Titans - WR A.J Brown is expected to be reinstated from injury reserve.

Unlike Week 15 we were scratching around for players, these two teams are just about at full strength (taking away the season ending injury to Derek Henry). So expect to get a more even spread of ownership as we are looking to extract value. The numbers on the season are quite low in terms of attack and defence but if there is one spot to avoid, it is the 49ers secondary who are rated 2nd DVOA on the season. The returning A.J. Brown paired with Julio Jones will give the Titans passing game some teeth, but I am going to back the 49ers defence here.

I thought Samuel was a Wide Receiver? The 49ers have turned him into some sort of Ty Montgomery/Cordarrelle Patterson type operator on the ground. He’s only seen 12 targets in his last four games but has run the ball 28 times. Anyway I like him here considering the 49ers will try either Samuel through the air or via the ground.

As the lead back for the Titans, Foreman has been a solid producer since Henry was put on IR. Whilst not big in the passing game out of the back field, the Titans keep feeding the ball to Foreman to 100+ rushing yard games from 2 out of the past 3 games. No TD’s as of yet but Foreman looks to be a solid cash style play when we are considering a rough secondary to go against.

You cannot ignore the numbers Kittle has been producing since his return from injury in Week 9. A 3-game average of over 30 Draftstars points including 37 and 42 points in Week 13 and 14. With an average of 11 targets per game over the past three games, Kittle is going to be massively owned but is capable of putting up slate leading numbers.

It is weird to think about not including Quarterbacks in your lineups but I simply think both Jimmy Garoppolo and Ryan Tannehill are too pricey. They are not going to project well despite Garoppolo hitting 20 fantasy points in Week 14. Tannehill hasn’t 20+ since Nov 1. It doesn’t seem right to leave them out entirely but I wouldn’t be hitting the lock button on either one.

Would like to give Brown a week before considering him in future single game contests after clearing IR. Of course he does have a big ceiling with two 30+ performances before his injury but his floor is specutulary low, which is highlighted by his 3-game average of 7. Not for me this week on his return. 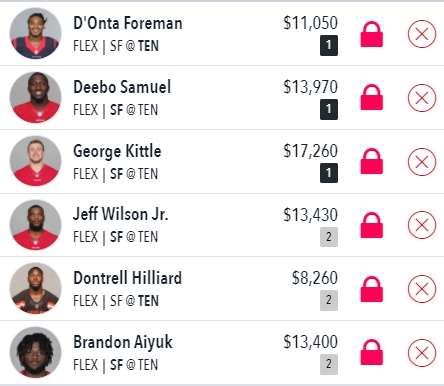