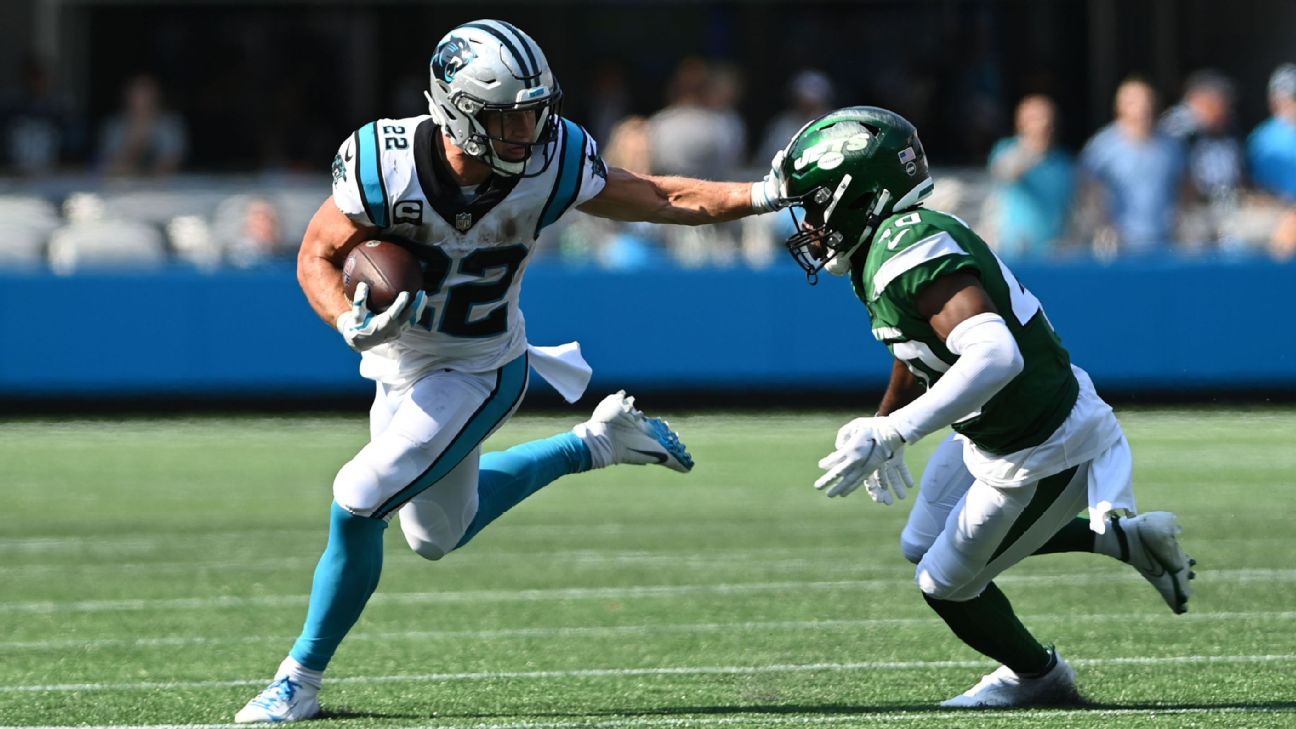 Not exactly a primetime spectacle for Thursday Night NFL to start Week 3, but we can tick off the Houston Texans in this spot and not have to worry about them for the rest of the season. The Texans face a fast starting Carolina Panthers team who have gone 2-0 to start the season and are heavily favoured to make it a 3-0 start under new Quarterback in Sam Darnold. Rookie QB Davis Mills will get the start for the Texans after Tyrod Taylor pinged a hammy in Week 2. All of the Daily Fantasy contests are back, so let’s see if we can getting the cash in this matchup.

Draftstars have a $12,000 contest up for grabs in the 6-man ‘Flex’ contest whilst another Millionaire Maker is up for grabs on DraftKings in their ‘Showdown’ format.

It was forecasted that the Texans will be a bad team this season and while the script hasn’t played out as of yet. It is highly expected that the Texans will struggle against a rejuvenated Panthers team. The prospects for QB Davis Mills are not that exciting after struggling in pre-season appearances with five turnovers and a rough looking QB rating of 58 in his fill-in role last week. The Panthers have only given up 21 points through two games so far and I expect the Texans offense to struggle. The injuries for the Texans are deep and we can achieve value to get the studs in.

Despite a small health scare after suffering cramps in Week 2, CMC will be good to go on a short week and in a smash spot against the Texans. Through two weeks the Texans are giving up over 5 yards per carry and will struggle to curtail his ridic production. It is a super high price especially on DK but he is nearly borderline essential to start your lineups.

Love the price on Moore on Draftstars who is leading the Panthers targets through 2 weeks. Moore has turned 19 targets into 14 receptions and a TD against the Saints last week. Moore has more targets than Robby Anderson and Terrace Marshall combined and this should continue against a Texans leaky secondary.

Back in Week 1 we suggested on the Draftstars NFL Show to target the DST against the Texans and despite a setback in Week 1 (Jags scored -3) it is still a viable play in all formats. The Panthers D has gotten off to a cracker of a start, only allowing 128 yards total offense from the Saints in Week 2 and registering 10 sacks and 3 interceptions through two games. With a rookie QB to target and an absurd high 21 Quarterbacks hits already, I love the DST for the Panthers here.

Probably not for me on DK due to that salary but that DS price for Cooks who clearly leads the Texans in receptions and targets is one I am on the fence about. Cooks did score a TD from Mills from the 2 yard line against the Browns and was the only receiver to receive multiple targets after Mills was inserted into the game. If the Texans get behind early, which the markets insist on happening then Cooks could be fed a steady diet of targets. I am not convinced however this production continues with this Panthers D.

Hate It - Running Back Committee for the Texans 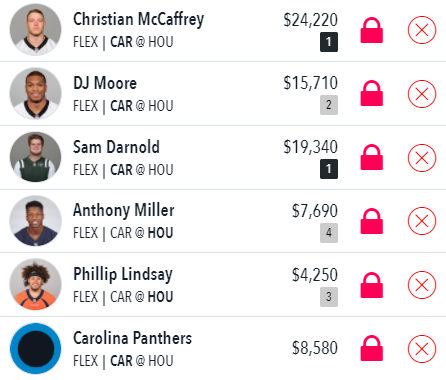 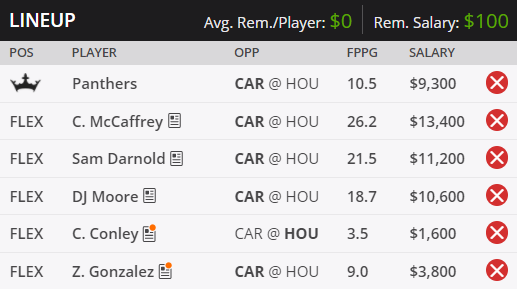