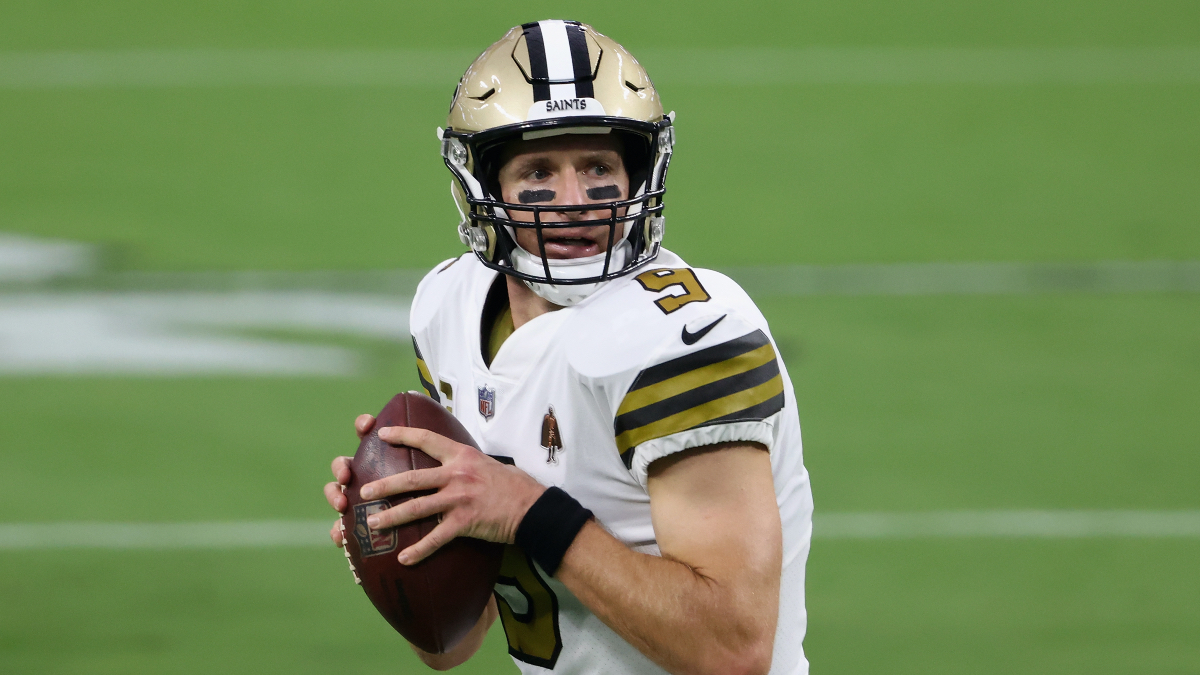 There is a massive 11 games on the main slate this week. The Draftstars slate has been flipped on its head for another week which I will touch on later. But you will need to keep a sharp foucs on injury news as there seems to be quite a lot this week. Let's see when we can navigate our way through Week 15!

On DraftKings, there are various types of Classic contests in the lobby highlighted by the $3,000,000 Fantasy Football Millionaire where 1st prize is $1,000,000! Entry into this contest is $10 USD per entry. There are plenty of contests on DraftKings including, single, 3 entry max and 20 entry max contests.

Also on this Sunday is the DK's 2020 Fantasy Football World Championship where Australian G.O.A.T fantasy player 'jayk123' will be competing. Keep an eye out on DFR socials to track his progress!

Also have you seen the snake drafts on DraftKings? You can now join a snake draft for single slates and compete in Sunday contests! Check it out! 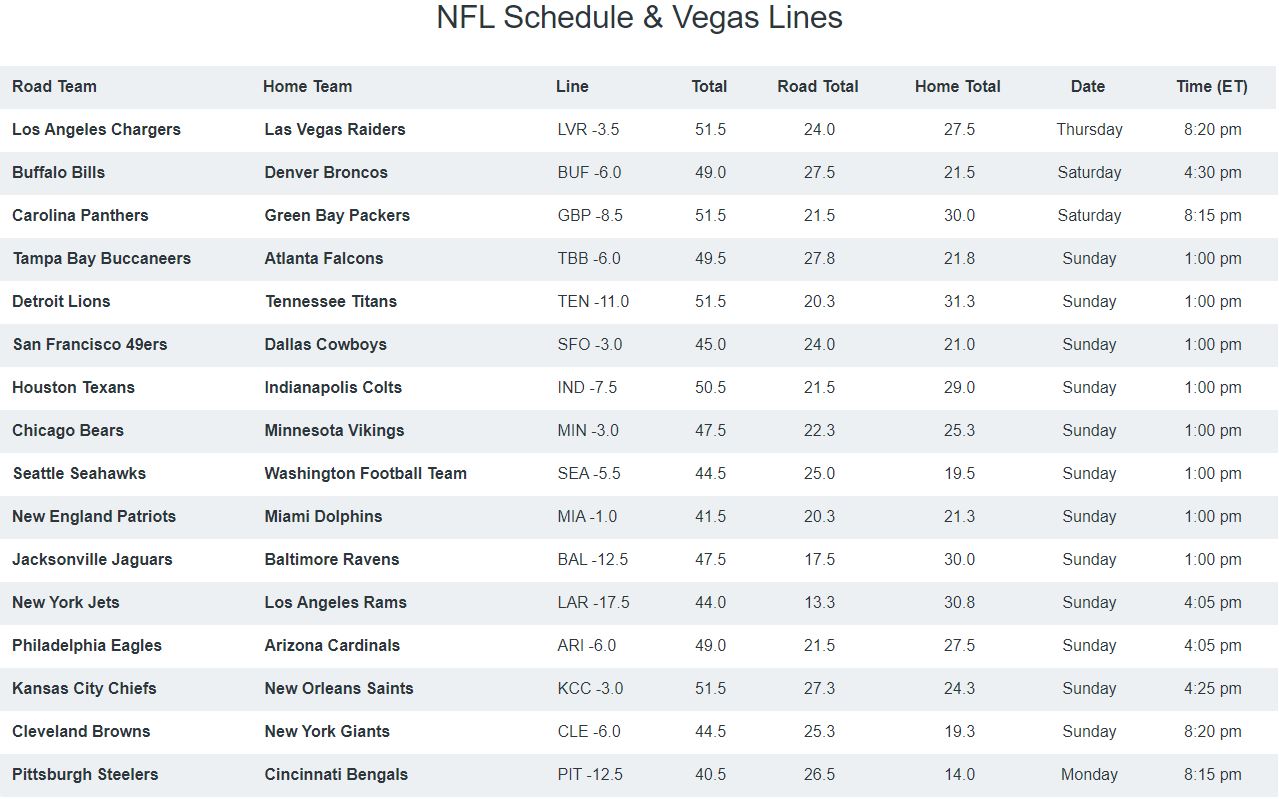 Jared Goff: The Rams are good this year! I know we’ve known that for ages, but I really thought they’d drop off a cliff after making some big win-now moves two seasons ago. Another obvious thing, the Jets stink. The Rams will most likely win this game by A LOT of points. The line is 17, it could get worse than that. That means lots of Rams fantasy points, we just need to figure out who gets them. I expect the popular play to be Cam Akers, who has exploded onto the season in recent weeks after a slow start to his rookie year. Turns out the Jets are actually okay at stopping RBs. My feeling is that Goff and his receivers will have plenty of fun, and I don’t want to miss out on that.

Lamar Jackson: Whilst dragging his team to an eventual win over Cleveland in one of the best games of the season on Tuesday, Lamar spent a drive or two in the locker room for ‘cramps’. Remove the m and you may have the real reason. More to the point, he looked pretty dangerous out there, running the ball extremely well and finding his receivers when he needed too. Now he gets to face a bad Jacksonville team which is one of the easier matchups for running the ball, and I expect him to continue his momentum. The risk is that his RBs JK Dobbins, Gus Edwards &/or Mark Ingram steal too many points if the Ravens are winning comfortably.

Drew Brees: I wrote up Taysom Hill, and then saw the news that Drew Brees is returning from a month off with broken ribs. Drew Brees is min price $6K!! You don’t even need to know more than that, but playing against the Chiefs where he should need to throw all day to keep up, it’s a very nice early Christmas gift.

Jonathan Taylor: The rookie had his best game of the season last week, and now gets another soft matchup in Houston. His form is good, and it appears that he is slowly taking full control of the Colts backfield. I see no reason that he can’t continue his momentum, and if he does then his higher salary this week will be no obstacle to being on a winning lineup.

Ronald Jones/Leonard Fournette: Here is a little COVID pricing treat to take advantage of. Jones was already in doubt with a broken finger to start the week, before he was put on the COVID list and now has to clear protocols to be available to play. If he does play, he’s an easy yes at minimum salary against an admittedly improving Falcons defence. The Bus should be too hot for Atlanta and I like their RBs chances of getting in the end zone at least once. That brings me to Fournette. If Jones does miss the game, Fournette will become the starting RB, and is also a good play. He’s more likely to have to share work with other RBs on the team, but is still a great chance to score the 12+ points needed to hit value.

Alvin Kamara: I wouldn’t usually recommend pairing a RB with their QB, but in this case I think it is a shrewd move. As I said above, the Saints should be chasing all day, and they’ve been throwing the ball a lot more recently. After some quiet weeks with Hill at QB, Kamara got moving last week with a massive 10 targets. If he can beat the Chiefs on the ground and also get a good amount of passing volume, he could be in for a big score with his #1 QB Brees back throwing him the ball.

Marquise Brown: This is another COVID pricing treat. Hollywood is on the list along with a couple of other Ravens receivers. If he manages to clear protocols and play, he’s a very nice play. His season has been a little underwhelming, but he’s still managed to clear 12 points in 6/13 games, and the team has been functioning a little better of late. I wouldn’t really want to play him at his normal salary, but it’s difficult to say no to easy value like this.

Cooper Kupp/Josh Reynolds: As above, I like the Rams passing game, and I’ve hand picked these two as my favourite targets. One reason is that Robert Woods is dealing with a thigh injury this year, so that could limit their other big receiver and give these two a small boost. Kupp is also a little cheaper than Woods and the teams WR1, so there’s almost a little value there. Reynolds has been the WR3 all season although it hasn’t translated into big fantasy scores. I still feel he’s a little underpriced in an easy matchup, but of course any of Van Jefferson or TEs Higbee & Everett could get the random TDs in a big win instead (not to mention any of their 3 RBs). These plays are really just for your Goff stacks.

Brandon Aiyuk: Another rookie exploding into prominence at this stage of the season, Aiyuk has had an incredible 5 straight games of 17+ fantasy points, and attracted 56 targets in that time. I don’t care how much the 49ers are struggling with injuries, he is far too cheap for that output. Throw in a good matchup against a bad Cowboys defence, and a little bit of faith in the abilities of Nick Mullens to get him the ball, and I like the Aiyuk play a lot this week. Stack him with Mullens, or just play him as a one-off piece in your lineup.

Mark Andrews: If there is one player I trust Lamar to throw the ball to, it’s Andrews. Travis Kelce is an excellent play above him, but I’m drawn more to Andrews in the hopes that his ownership is lower as everyone flocks to Kelce. He hasn’t had many really big games this season after breaking out, but as I said I think the Ravens are coming good late in the season and should make easy work of Jacksonville.

Jared Cook: I avoided mentioning Michael Thomas as another Saints stack piece, because I like Cook a little more in this game. The Chiefs are pretty good at stopping WRs. Also, TE is pretty thin on this slate with Kelce and Andrews as really strong options at the top and then a bit of lucky dip bargain bin action below. I rate Cook highly, and have plenty of nice memories of Brees to Cook plays last season. It’s a play for those who like to take on a little more risk.

New England Patriots: With no Giants to pick on this week, I’ve settled on the banged up Dolphins as my preferred target. Tua is doing a decent job as a rookie QB, but all his receivers are either out or struggling with injury, and I’m expecting Cam Newton to score some points against a defence which struggles against the run. That means Tua has to keep throwing the ball, and we could see some turnovers and even DST TDs for the first time in his young career. If not them, maybe the Titans against Detroit if Matt Stafford misses with his rib injury. 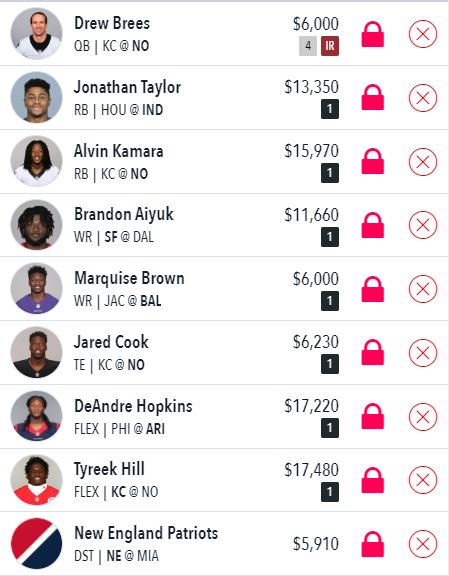