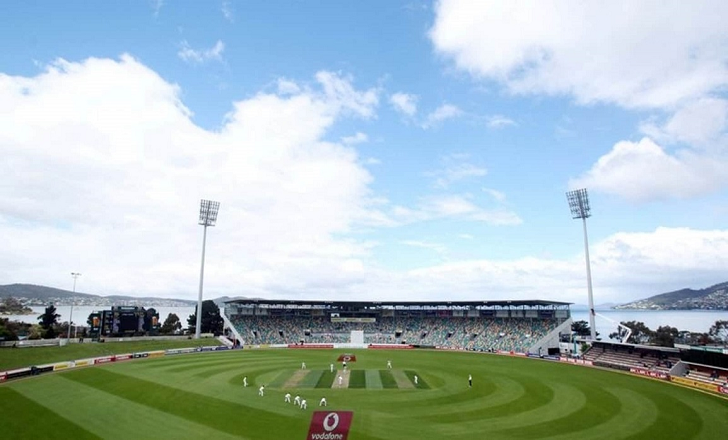 After a dramatic draw in Sydney in a match that went right down the final ball of the fifth day, Australia and England will now head to the Apple Isle where Blundstone Arena in Hobart will host the fifth and final Test match of the 21/22 Ashes series.

The action kicks off Friday afternoon at 3pm AEDT with the pink-ball day/night 5th Test set to provide some excitement for the local Tasmanians who have been starved of Test cricket in recent years.

Draftstars are offering a $15,000 guaranteed contest for this one along with a high stakes and mini contest to offer something for all budgets. Note Test Match scoring is different to T20/OD cricket as it is much easier to follow throughout the game.

Australia have missed out on the 5-0 whitewash after the draw in Sydney, but they couldn’t be happier with the output of their entire squad this series. There’s not many teams in the world that will challenge them when they play like this.

The Australian batting, which has often been their achilles heel, has been superb throughout the whole series. The old school notion of earning your spot, and then not giving it up when you get an opportunity, seems to be paying off with Usman Khawaja coming into the side and blasting twin centuries in his comeback. Surely he makes himself impossible to drop now. Travis Head is likely to come back into the middle order after missing with Covid, so that leaves Marcus Harris on the outer. The nation will riot if Uzzie gets dropped!

Khawaja will probably slot into the opener spot, but the best idea I’ve heard came from Ed Cowan who suggested elevating Marnus Labuschagne up to face the new ball. Batting at three is basically the same mental, and technical, approach to opening, and many greats like David Boon and Justin Langer made the same step successfully. It also provides a right/left combination at the top of the order. Yes, Khawaja has a good record opening the batting, but that was a lifetime ago, and he’s fundamentally a middle order player now. Bat Steve Smith at three and Uzzie slots into number four, looks a pretty nice order to me.

With the ball it’s a similar story with Michael Neser, Jhye Richardson and cult hero Scott Boland all performing exceptionally well when given the chance in this series. It seems that Boland may get one more game with Josh Hazelwood still on the sidelines, although there were whispers he might not be 100% and that Richardson was a chance to come in. Mitch Starc is probably due for a rest, but he’s publicly stated he doesn’t want one, and given his pink ball record, it seems that he’ll play out every match of the series.

It’s been a very tough tour for the visitors, and while it was great to see them show more fight in Sydney, they will be very pleased to get this tour over and done with. They copped a few injuries in Sydney and reports are they are set to swing the axe with as many as five changes to the last XI.

Wicketkeeper Jos Buttler has been sent back home to England with a broken finger, Ben Stokes has a side strain so will only play as a batsman while Jonny Bairstow is in some doubt with a thumb injury.

BBL star Sam Billings is in line to make his Test debut in Hobart as he’ll take the gloves, while Rory Burns looks set to be recalled in place of opener Haseeb Hameed. Ollie Robinson will return to replace the struggling Jack Leach, while Chris Woakes is a chance to play in place of James Anderson who may be rested.

The reality is that England lost this series even before the first ball was bowled when they left Stuart Broad and James Anderson out of the first Test at the Gabba. Was it arrogance or stupidity? Either way, it was an insane decision and their selections didn’t improve from there. It’s a shame that we may not see Broad and Anderson bowl together in Australia again.

Australia are the $1.44 favourites and on a pitch that is usually good for producing results, it’s hard to look away from the Australian players in this contest, despite most of them having hefty price tags on Draftstars now!

With the Australians so expensive, and the Englishmen so rubbish, it’s hard to find much to love in this contest, but I’ve landed on Travis Head as the best value pick. After missing last Test, his price tag is the cheapest of the Australian batsmen and he’s had a very good series. Will be keen to bounce back to ensure that his place in the side isn’t under threat for the tour of Pakistan.

Obviously this is dependent upon selections, but if Richardson comes into the XI instead of Boland, then I think he’s a great play. Will be champing at the bit to be unleashed and is an excellent pink-ball bowler. The Hobart wicket has suited the quicks in recent years, and looks pretty green, so I expect the Australian bowlers to be a handful. If you don’t want to pay up for Starc and Cummins, then Richardson is the go if he plays.

While the draw was admirable in Sydney, I think they are going to cop difficult conditions to bat in Hobart against our quicks. A spicy green deck and a pink swinging ball spell a recipe for disaster for England’s fragile batting. You need to find salary relief somewhere but England’s batsmen is not where I’d be looking!

Broad, Robinson, Woakes and Wood should also be a handful in favourable conditions, and their prices are far more affordable than their Aussie counterparts. Can they challenge this Australian batting line up? If they can make inroads and get twenty wickets, then the winning Draftstars lineup may just contain one or more of them as they provide decent value. But 20 wickets is not something they’ve been able to do all series, so why would they start now? 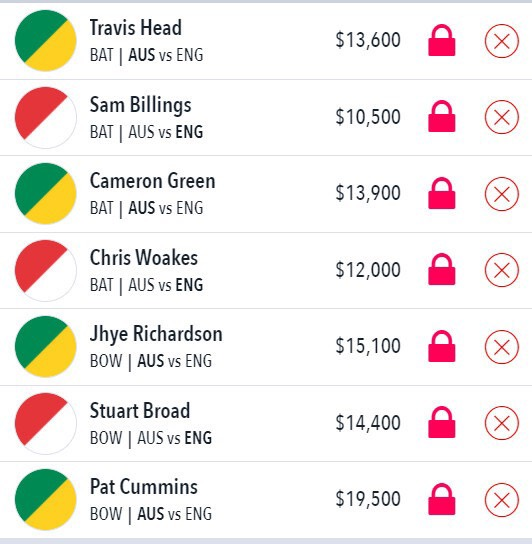