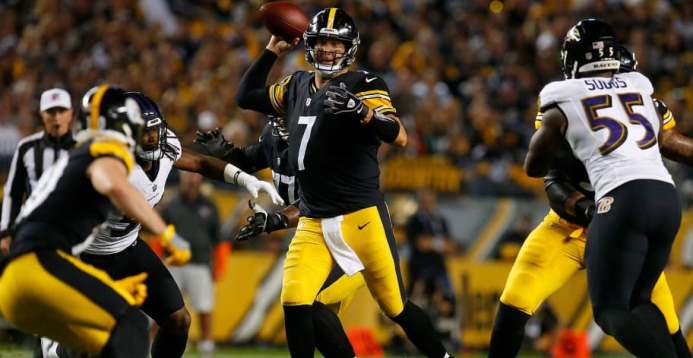 The final games of Week 5 in the NFL will get underway on Sunday (Monday 4am AEST) and to add to the excitement, the team at DraftKings have several huge contests available. For $3 you can buy an entry into their $1.7 million contest, or for $20 you can take part in their massive $4 million contest, where first place will become a millionaire!

Much like last week, we’ll be looking at two quarterbacks from the same game. In Pittsburgh, Big Ben and Matty Ice will be looking to the air, based on the high total points available for this matchup. Roethlisberger leads the NFL with 1,414 passing yards thus far and with the Steelers defence not at its best, he’ll likely need to score quick points once again. He’ll also face a Falcons side whose defence has been burned by opposing quarterbacks. Over the last 2 weeks, Drew Brees and Andrew Dalton have been on the money. Overall, this defence is missing a few key starters and the trip to Pittsburgh won’t be easy.

On the opposing side, the story is similar for Matt Ryan against the Steelers defence. Pittsburgh are ranked 29th overall in the NFL for passing yards allowed so far (304.8 yards per game). They struggled against Flacco last week and have conceded over points in 2 of their last 3 games at home. Ryan is ranked 6th for passing yards and has found a new favourite target in rookie Calvin Ridley, who already has a massive total of 6 touchdown catches so far this season.

Julio Jones continues to be a threat with 502 receiving yards, which ranks 1st in the NFL.

On the ground, Matt Breida has an awesome matchup against the Cardinals. Arizona is giving up 141.3 rush yards per game and that ranks 31st in the league. With the 49ers missing Jimmy Garoppolo and going to their backup, they should look to take advantage in the running game. Breida didn’t have a great outing last week (9 attempts, 39 yards) as the 49ers were forced to throw the ball. However, his home opener was dominant as he racked up 138 yards from 11 carries against the Lions. Detroit is ranked last in the NFL for rush yards allowed, so the matchup says Brieda goes over 100 yards.

Another running back with a great matchup is Aaron Jones for the Packers. He faces the Lions who are letting backs run all over them. Overall, they’ve allowed 157.8 rush yards on average per game (worst in the NFL). In their first 4 games, 3 backs have ran for over 100 yards and that bodes well for Jones. He’s back from suspension and has been slowly worked into the running game. Against the Redskins, he carried the ball 6 times for 42 yards. Then last week against the Bills, that increased to 11 attempts for 65 yards and a touchdown. So I’m expecting the Packers to give him plenty of the ball and dominate this Lions defence.

We’re heading back to Pittsburgh and looking at Calvin Ridley. The rookie has already hauled in 6 touchdowns in 4 games and with an expected shootout between the Steelers and Falcons, the trend should continue. Julio Jones will take most of the heat from the Steelers defence and that opens up the field for Ridley. He’s becoming a favourite target for Ryan in the redzone as well.

Heading to Cincinnati, we like the form of Tyler Boyd and his matchup. Boyd is averaging 87.3 yards per game and actually has more receptions (26) compared to A.J. Green. The Dolphins defence will likely put attention into Green and that’s great news for Boyd. Miami is allowing 284.8 passing yards per game, which ranks 26th in the NFL. Andy Dalton tore apart the Falcons defence on the road last week and should enjoy even more success at home in Week 5.

Jared Cook is fast becoming a lock at tightend in Fantasy circles and we don’t see that changing this weekend. He’s currently top 10 in the NFL for receiving yards and he’s the only tightend in that category. Last week against the Browns, he hauled in 8 catches from 13 targets and also found the endzone twice. The Raiders will need to air it out against the pass happy Chargers and that should see Derek Carr continue to link up with his favourite target. Not to mention 49ers tightend George Kittle tore up this Chargers defence last week with 125 receiving yards.

On defence, the Carolina Panthers are a good option as they face the Giants at home. This Panthers defence is allowing just 20 points per game and that’s even lower at home. They faced the Cowboys in Week 1 and kept their dynamic offence to just 8 points. In week 3, they beat the Bengals 31-21 and the major factor was 4 picks of Andy Dalton. Eli Manning has thrown just 1 pick this year but he’ll likely have to force throws this week, which could increase the chances of interceptions. Also, the home side heads into Week 5 fresh as a daisy coming off the bye and get to face a weak Giants offence. New York is scoring 18.3 points per game and have really struggled to score points over the last 2 seasons. Another interesting fact between these two sides is the Giants were shutout in the last meeting in Carolina (38-0 in 2013).