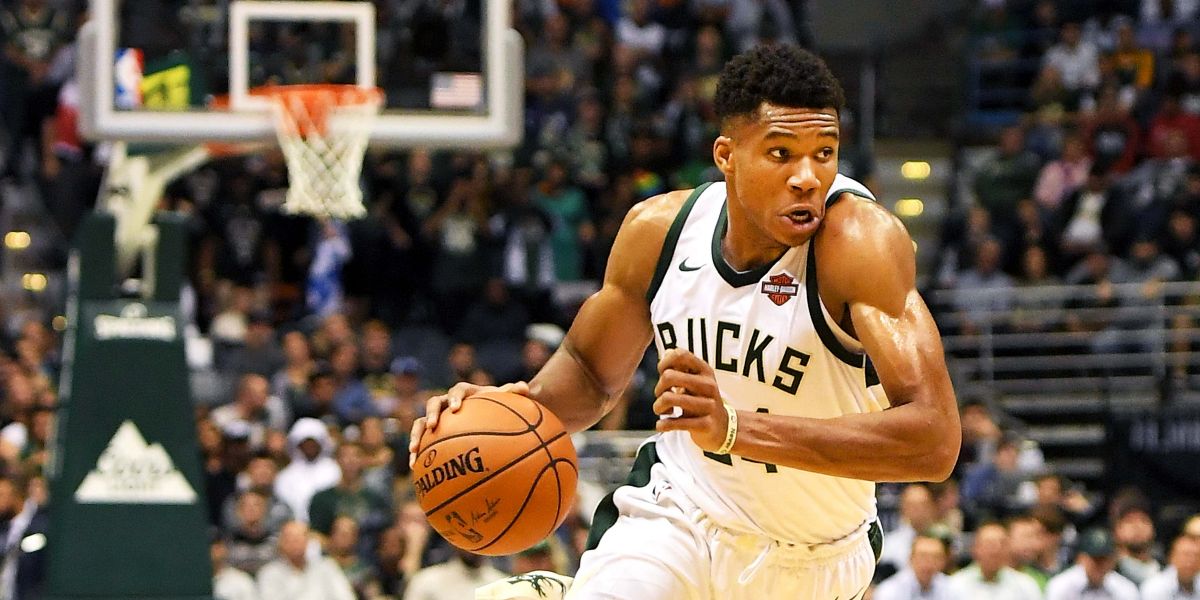 We have broken down the matchups and highlighted the key plays to help you build winning line-ups. For more insight into how to utilise our game breakdown data check out our NBA DFS Training Camp Series:

Just six games on the slate but it is overflowing with options to attack with four of the six featuring game totals of 227.5 points of higher. The top total is Atlanta at Washington set at 233 points with fastest team in the league taking on the 9th fastest.

Milwaukee at Brooklyn will be my next best game to attack on this slate with a game total of 227.5 points. If Brooklyn can keep the game close it should make for a huge shoot out as they have been playing at a super fast pace recently (fastest in the league over the last 15 games).

Washington are in the pace up matchup of the slate which is no surprise given Atlanta have played at the fastest pace in the league this season. This has resulted in a +6.8 implied point total above their season average, also the largest on the slate. This game will be the most popular to attack.

Indiana might be the sneaky team to attack on the slate if you can stomach it. With the fourth top pace up matchup on the slate against New Orleans, they are also slight favourites, something that would be rare at this point in the year with Oladipo no longer playing.

Major injury news that will impact this slate:

Garry Harris will not play in the game against the Pistons on this slate, and Jamal Murray is questionable. Denver guards Monte Morris (DS $13,520, DK $6,000) and Malik Beasley (DS $12,970, DK $5,500) have become value chalk in recent slates, however if Murray returns they will be less valuable as minutes will become less certain.

Anthony Davis, Nikola Mirotic, E’Twaun Moore, Elfrid Payton and Julius Randle remain out for the matchup on this slate. The biggest beneficiaries have been Kenrich Williams (+13.4 points per 36 minutes with those five players off the floor), Darius Miller (+10.9), Frank Jackson (+8.4), Tim Frazier (+5.6) and Jrue Holiday (+3.3).

Derrick White has been rule out of the matchup on this slate. In the 9 games White has missed this season it has been DeMar DeRozan (DS $14,040, DK $7,500) has seen the biggest increase at +7.3 fantasy points per game. These stats are perhaps a bit noisy however given White’s role has increased significantly throughout the year. 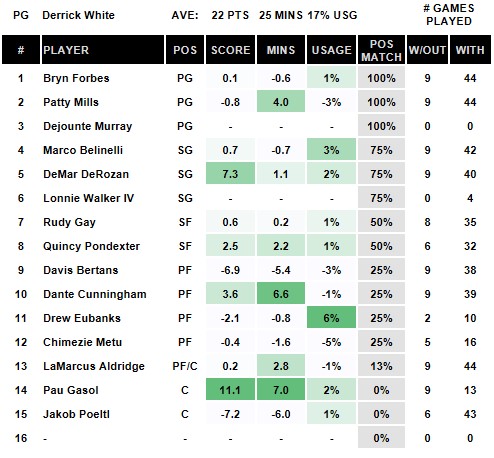 Patty Mills (DS DK $4,100) / Bryn Forbes (DS DK $4,000) are both typically cash game value staples if more obvious alternatives aren’t available. They should also both get a minute’s boost from Derrick White being injured and draw an elite matchup on this slate against the Pelicans who have given up the 4th most fantasy points in the league this season.

Tim Frazier (DS DK $3,900) / Frank Jackson (DS DK $3,700) have both yet to see any significant price increase despite significant minutes increases since 5 of the Pelicans top contributors this season sat down with injury and/or trade-me-itis! Jackson will draw the start and be the highest owned, he is also the safest option for cash, while Frazier will likely come off the bench but give you an ownership edge in GPP’s if he can reach his 40 point ceiling.

DeAndre Ayton (DS $12,990, DK $6,800) returned after a long layoff last game and was straight into a full load playing 33 minutes and posting 35 fantasy points despite shooting just 5/15 from the floor. On this slate he will draw the Rockets who plucked Kenneth Faried off the scrap pile to soak up the majority of their centre minutes. This should make for a great matchup for Ayton and at this price has significant upside with a ceiling of 50+ points.

Miles Turner (DS $11,620, DK $6,300) rarely shows upside, but he makes for a nice GPP flier given I expect his ownership to be relatively low. The Pelicans have been second worst at defending the centre position from a fantasy point perspective over the last 10 games as they field a “G-League” team and Turner will hold a significant athletic advantage over Jahlil Okafor. 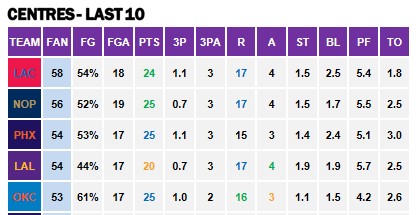 Otto Porter Jr. (DS $10,820, DK $5,900) is price in that perfect range for his upside and draws one of the top matchups for his position on this slate. The Hawks have given up the second most points to small forwards over the last 10 games (and fourth most to power forwards), including the most rebounds, which is where Porter typically capitalises when he hits his ceiling.

Thad Young (DS $12,360, DK $5,800) has been a go to play of mine since Oladipo has been out. You can pick him up at minimal ownership on most slates and he hasn’t disappointed with 39.5 and 34.75 fantasy points from his last two games. The play here, however is to wait until he drops one of his 50-burgers to help win you a GPP (as he did 6 games ago against the Raptors). On this slate he drafts an elite matchup against New Orleans who play at one of the fastest pace in the league and have given up the 4th most fantasy to power forwards over the last 10 games. 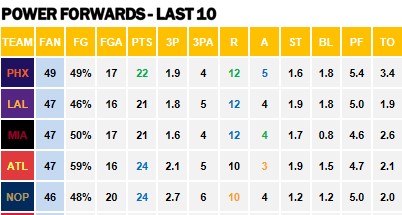 Giannis Antetokounmpo (DS $21,670, DK $10,900) is my pick of the top range on this slate. After last game I suspect the majority of the ownership will flock back towards James Harden and that is totally understandable. However, Chris Paul will be back in the lineup, so I will look to fade that and hope for a blowout and a floor score of 50 from Harden (yes you read that right).

Giannis also draws an undercover premium matchup on this slate as Brooklyn’s pace has gone through the roof over the past month plus, being the fastest in the league over the last 15 games. This should play right into his hands increasing opportunity to fill up on peripheral stats.

John Collins (DS $14,070, DK $8,100) is in the top game total of the slate against Washington are 24th in the league in defensive efficiency this season. The have given up the 5th most points in the league to power forwards including the second most rebounds to the position, which will play right into Collins hands given he averages 10 per game.

DeMar DeRozan (DS $14,040, DK $7,500) should make for a nice under owned option for GPP’s given his recent performances. But as noted above with White out DeRozan has seen +7.3 fantasy point increase this season and would expect to see a serious increase in ball handling / play making duties. He also has a strong matchup on this slate against Sacramento who have played at the second fastest pace in the league this season.